Unexpected Games - Bought, Added to Wishlist, or Growing Interest In 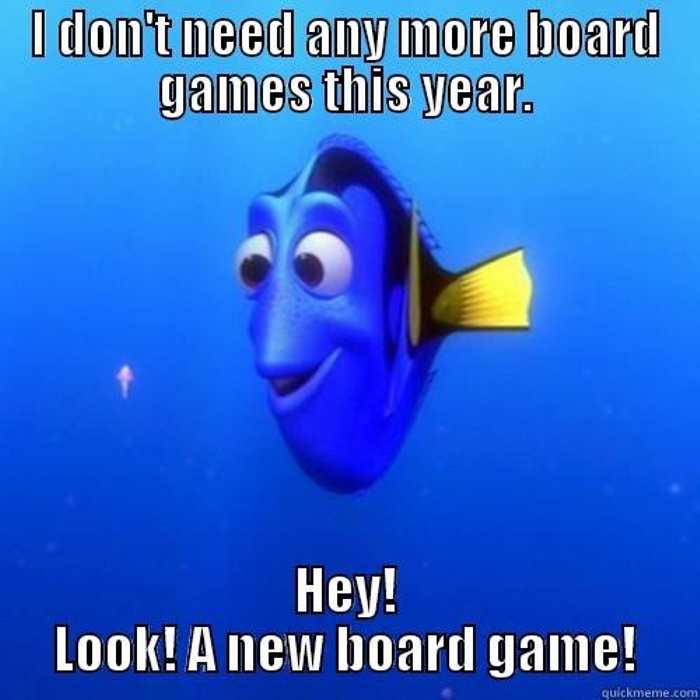 Hmmmm.... I've been able to stick to my commitment to not buy another game until end of the year holiday sales. But one thing I've noticed these days is my ever expanding wishlist. So that made me think of this question:

Is there a game (or games) you got recently that came way out of left field? Where you hadn't thought about getting it but it just ended up in your hands after you visited a store? Or games you would've never expected to add to your wishlist or to grow interest in? And lastly, what drew you in?

Personally, I think it's a fun part of our hobby that's to be embraced :)

All of a sudden I am very interested in Wingspan. I’ve previously considered it more of a flavor of the week instead of actually looking into it. Now I’m excited to track down a copy!

What got you interested? It's certainly outside of your usual choice of games :D

Well I love engine building games. And part of me was uninterested in the theme. But I finally looked into it and figured out that I’ll probably be really into it.

Flip Ships is so good :)

And I am DYING to play Clank! Legacy! I love Clank! as it is, but a legacy game? I'm all kinds of in!

I can’t believe that you haven’t played it yet. You are a big proponent of Clank!

In fact, I heard you were developing it’s sequel, Clunk!

I thought about getting Clank! first but I might as well go all in right? :D

I watched a runthrough of Flip Ships and it seems like a great idea for a party game. I do have one concern with it though that would keep it outside of my shortlist of games to buy. I'm not sure of its replay value. I could see it being a blast to play but I feel like there's potential for it to lose its shine after a few plays (especially since it'll only get plays from my family). Actually, there's always the possibility of playing with the high schoolers in my youth group so that could be a hit.

I find that Flip Ships is consistently good. Maybe if I played it constantly it would lose its luster after a while, but I really enjoy it every time I bring it out. I could see it being not as fun once you get super good at it, but when that happens, maybe you've been playing it too much anyway haha If you have a game store that lets you try out games or a board game cafe nearby, I'd recommend playing it first to get a feel for it. This is, I think, one of those games that are hit or miss with people.

For me I think #Trajan and #Tzolk'in: The Mayan Calendar we’re unexpected for my wishlist. Didn’t appeal at first but after playing online I really liked them!

#Root was an unexpected buy since I wouldn’t pay full price, but then found it for super cheap!

Trajan has me intrigued as well. Although I wish they could make it more Roman themed.

Yeah it’s really good. Do you just mean in terms of artwork?

Like the mechanics just don’t really scream This is a game about Rome to me.

Tzolk'in has been on my list since last year. Medium/medium-heavy weight euros with manageable rules overhead and smart mechanics tend to be the sweet spot for me. So I assume @nealkfrank hasn't played this yet either?

What a find on your #Root! The #Root: The Clockwork Expansion is available for pre-order now but I really should exercise restraint... hahaha

We played Tzolkin together online and it was a very enjoyable game. Very tight with some very interesting mechanics and I have heard the expansion adds some nice variety after you get a hold of the game.

Haha same here! Just sad I haven’t been able to play it yet!

This meme hits home for sure lol.

Honestly I did not think #The Estates would be a game I would ever buy, then I watched a playthrough on Heavy Cardboard and was hooked and also realized my game group really does like interaction and some meanness to their games. Sold. I also actually hated #Pax Pamir (Second Edition) the first time I watched a team and playthrough, but I kept hearing from everywhere that it was a top 10 game of all time for people. I revisited that teach and playthrough and fell in love. The mechanics are so simple, and the challenge lies in reading other people and the game state. Fascinating game and it is my first project I have ever kickstarted.

As far as games that are on my wishlist that I never thought would be there are actually the two most recent additions. #Bus and #Age of Steam. I cannot get enough of AoS now, the bidding, the action selection, the route building, the deliveries, the planning. It all just comes together in a really neat system. #Bus is something that is actually similar to AoS with route building and deliveries but it is super fast but super challenging and a very unique design. One of the few Splotters that has appealed to me.

The meme gets me too. My wife just doesn’t understand.

Ha yes, the wife never gets it even if they enjoy some of the games I have!

With you mentioning #Pax Pamir (Second Edition) every now and then, it's been a reminder for me to go check out a proper playthrough. Any idea how well it plays solo? I should consider getting the copy from Trent and trying it out.

You're also influencing me to consider looking up train games now too xD (doubt I'll ever get one, but I should at least check it out).

Edit: by the way, I interviewed Martin Wallace (designer of Age of Steam) a while back. I reached out to him again recently and looks like he'll be available for a video interview with Trent next week.

I have heard and seen that the solo variant for the game is excellent! As expected with a Cole Wehrle game!

That is amazing!! I am very much looking forward to that interview! Age of Steam is definitely the train game that has my attention the most.

This is cool. And such an awesome/terrifying part of our hobby.

Haha yep. Any hobby, really. Though it makes it tough to not buy something when it's by nature a social hobby and your #1 play partner encourages you in it...

There would be a lot of people out there who'd be green with envy hearing that haha. But I also have a wife who leans onto that side and it can be exciting but dangerous at the same time if you have a very small budget for games! If we had a bigger budget I could easily see us walking out with several games in hand every time.

Maybe #Expedition to Newdale will be one of your future purchases :)

Haha I definitely appreciate it, but we need to be responsible lol.

And I'd never heard of that game. It looks pretty cool! I'm generally not interested in campaign games, but I'd consider that one! Luckily for my bank account, I'm not going to be buying any big games any time soon, haha.

There have been several for me.

I forgot to mention the Pax line of games from Sierra Madre.

That's a lot of Pax and tons of historical games! (it sure sounds like it at least, based on the titles). So I assume they all have fantastic solo mode?

(I wish I could ship #Root to you myself).

#Pax Renaissance I'll probably be getting on faith.

#Pax Emancipation is supposed to be great solo. But, it is super heavy.

I feel you on the Pax series, They definitely are a very interesting niche of the BG community.