Through the Ages App - First Impressions 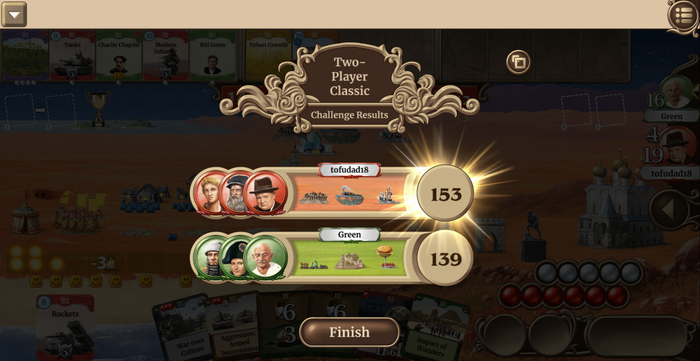 I waged war against Gandhi in #Through the Ages: A New Story of Civilization app (Gandhi and his predecessors, to be exact). By far the heaviest game I've played, but I started to get the hang of how everything works. I didn't even realize how long I had been playing because I was so absorbed with adjusting my tactic to try and win.

Here are my first impressions after the tutorial a few days ago and then completing my first challenge against the AI today:

(++) Tutorial - The tutorial is fantastic and filled with lots of humor. You have "Ancient Vlaada" as your civ's leader who hand-holds you through each element of the game. It's still a lot to take in by the end, but I can't imagine it being anything better. There's been a lot of thought and love put into it and I appreciate that.

(++) App implementation - When I watched a review of the actual game, I knew right then that I'd never own the game myself because it's so darn fiddly. The app takes care of all of the details so that you can completely focus on playing the game and planning your strategy.

(++) Depth of gameplay - I'm a strategy nerd so I can't think of anything but good to say for this. In each turn, a player will go through each of the phases: taking a political action (wage war, show aggression, etc.), then a number of civil actions (increase population and/or advance your civ's food, resource, technological, or cultural production), and lastly a number of military actions (advance military might or tactics). Your limit on the number of these actions will vary depending on your technological upgrades or the type of civilization you have (which you can either upgrade peacefully at a higher cost or revolt at a lower cost but eat away at most of your available number of actions). All of this happens under these other very important strategy elements:

(++) Replay value - I can easily imagine each play being completely different from the other. The variable setup in the order of the cards alone will do this, but there's also the overall play style you can change up on. I'm going to enjoy discovering what are some of the most viable strategies.

(-) Time - It seems to be on the longer side, and I'm not sure if I'd ever want to play against other players, especially if they're prone to AP. There are about 30 different challenges the app offers against AI's, so this will be plenty for now.

Final thoughts: Great game with incredibly smart design ideas, but I'd only play on the app. Also not a good option to play with my wife. Way too heavy and it's just full of potential for aggressive plays @sdirrane (I'm up really late because my son woke up at 2am and couldn't fall asleep until 4am...)

Excellent Phil! I am happy that I was able to help nudge you in getting the app! It really is pretty neat, the tutorial is great and the game play is sleek, definitely a far cry from the fiddly mess that the tabletop version is!

It definitely worked out for me. I've only played once so far but I've wanted to revisit it. The challenge mode alone is well worth it in my opinion.

Great review Phil! Echoes my thoughts on the app and the board game as well. I need to get back into playing this app.

Thanks! I like it, it's definitely a game that's for me but it's not one that I can go into any time mindlessly. In comparison, I downloaded the free app for #Onirim last night and played four times in a row in an instant.

I went through the tutorial once several months ago, but never got the time to sit down and actually play a game of it. I wasn't familiar enough with the game to just take a turn and put it away for later, so I'd need to play a full game first. At this point I'll have to redo the tutorial haha.

It really took me the tutorial + one full challenge for me to grasp the nuances. Since it's my first game above a 4.0 weight range, it was tough haha. Makes me wonder if I'd ever own a game in this range.

Yeah I kind of doubt that I would for anything but solo gaming.

I love this app although it's the only way I have ever played this game so I can't compare the two. Seems like a lot to keep up with and the app does all of that.

Right, all I know is that it was an immediate no for me after seeing the number of cubes I'd have to manage!

I feel like I should maybe have got this...

It's a fun one. I'm not yet sure how often I'd tackle it but it would become one of my favorites if I can reduce how long it takes to play.

It clips along at a pretty good pace once you get familiar with it.

That's good, how long does a typical game take for you to finish?

I haven't played in a while, but I'm thinking it usually takes 30 to 40 minutes. You know how it's easy to lose track of the time. At least my wife tells me that. ☺️

Here's an example of the humor in the tutorial:

This is a place to share your best finds for board game digital adaptations and companion apps.