So, anyone who has spent any length of time on this site has probably seen me yearning for #878: Vikings - Invasions of England, a game I have probably wanted for about the last 18 months. Sadly it is generally not available in stores, or even online, in the UK and all the second-hand copies up until this point have been exhortionate.

However, the glorious day arrived where I found a copy second-hand within my budget and it arrived just this Friday!  We started a game today and unfortunately ran out of time to finish and while I will for sure write up a more significant review once I've played it a few more times, I figured this was a great opportunity to write up some early impressions: 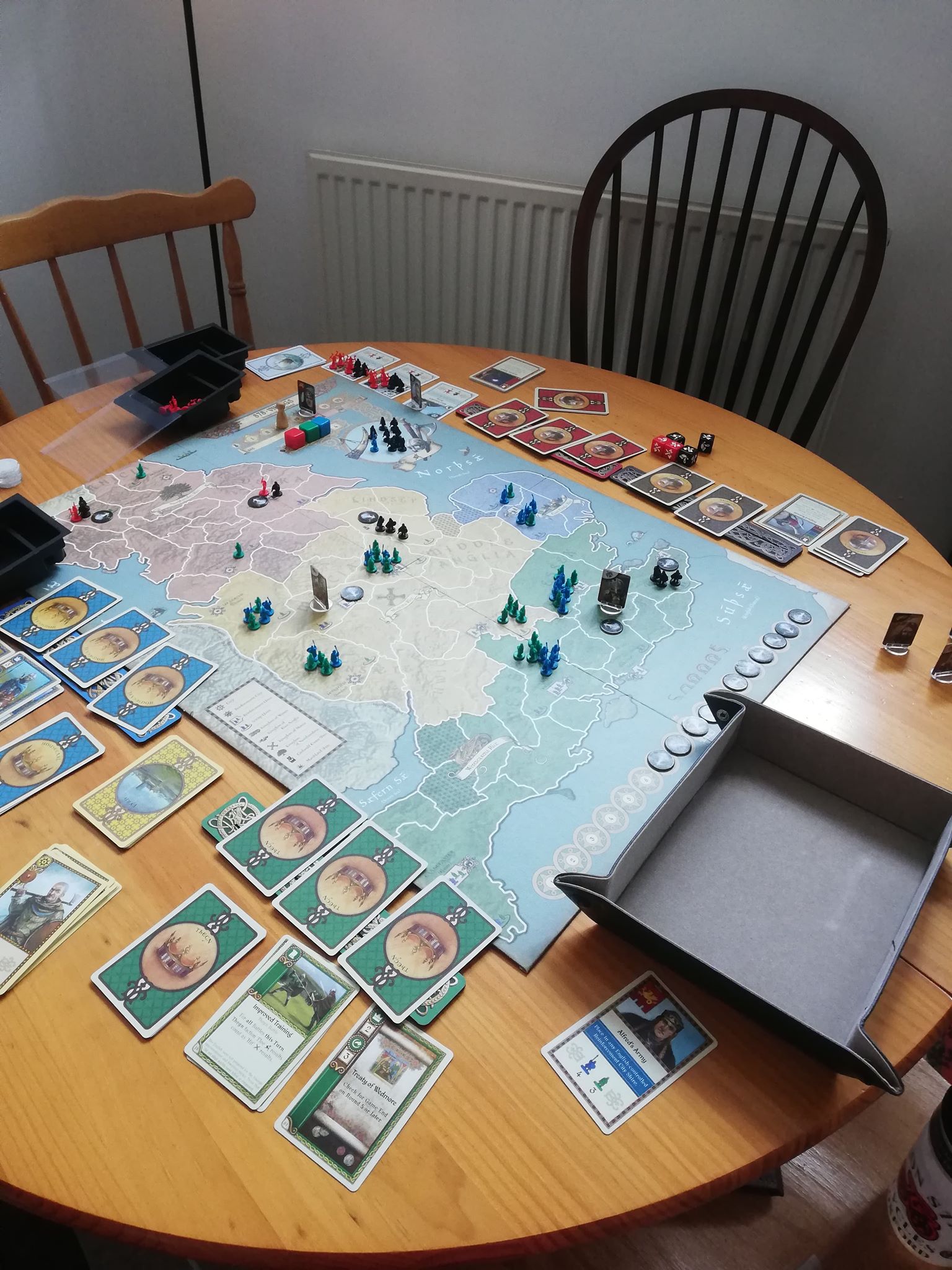 First off, the box is of somewhat lower quality than some games I have played recently, the rest of the components are of pretty average quality. This tends to not be a problem for me, there is nothing that is lacking and the custom dice are really nice. The miniatures individually are nothing special but by being smaller and colour coded it makes reading the map intuitive and pushing a big ol' army of tiny dudes into an area is very satisying.

The asymmetry between the factions is subtle in terms of capability (different dice and event cards) but the way the game allows you to use them is where the differences really show. The bersekers are the most deadly unit but one is always the first to die in a battle so they can become increasingly rare. They also never flee a battle, fleeing is surprisingly not as terrible as it might seem, the units don't die and allows you to reposition your forces in subsequent rounds giving (especially the English) a lot of flexibility. 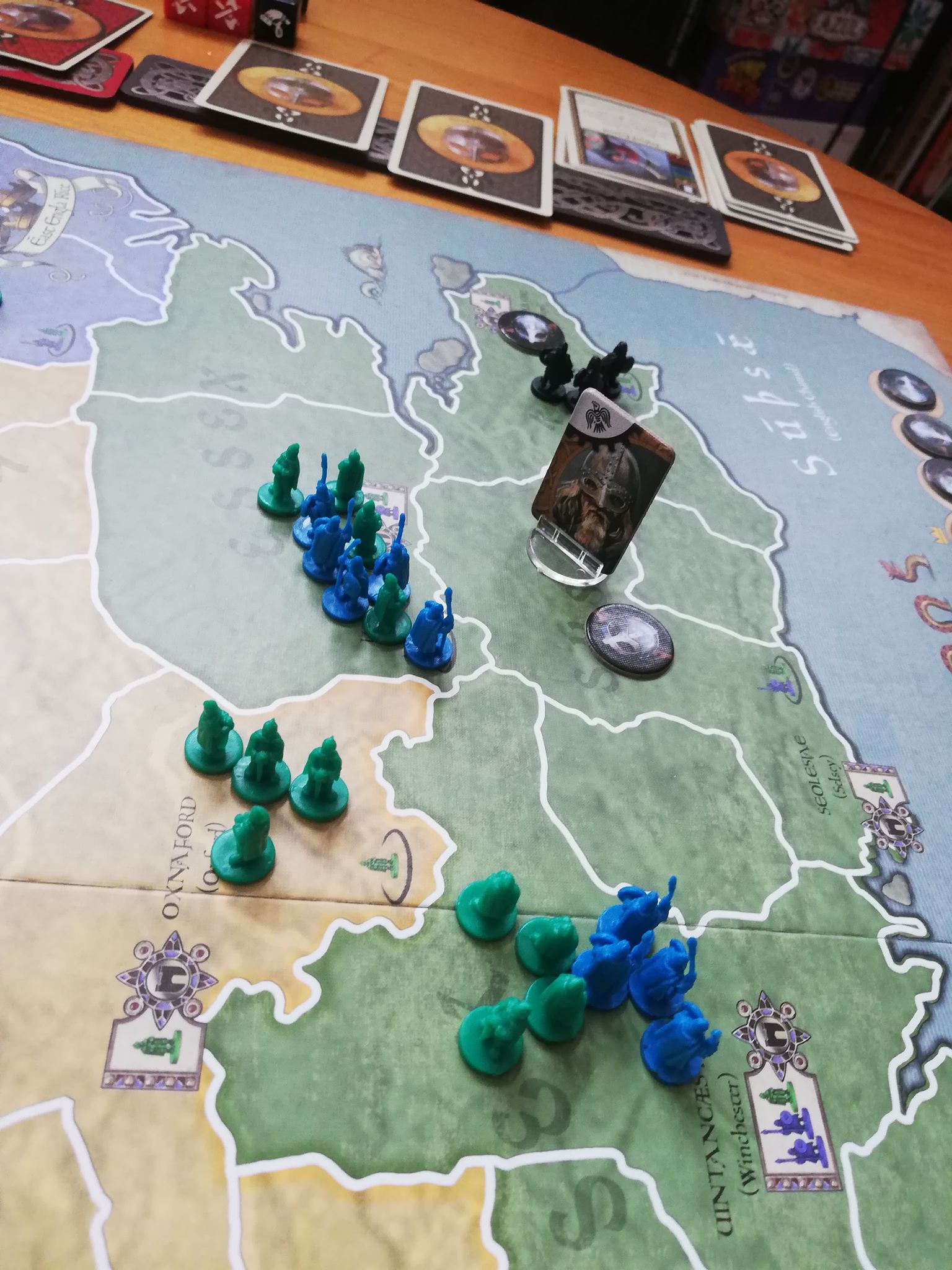 (My poor little vikings are in trouble!)

Broadly, the vikings are the agressors, they have to capture varying numbers of cities depending on how the game progresses, they get huge invasion forces that arrive each round while the English get reinforcements spread throughout their cities and are playing a 'fighting defence', sapping the vikings strength and hitting back at opportune moments.

At the start it seems like the vikings have significant advantages in both pwer and agency, their units are fundamentally better and the leaders give them more flexibility when moving. However, as I soon realised, being over ambitious leaves you very vunerable. You have to leave vikings behind to maintain control of the cities you capture. Leave too many and your rampaging viking army quickly runs out of steam, leave too few and the English can opportunistically steal back a city or two. This really matters as whenever the vikings attack a city, the English get to draw a 'Fyrd' Card which adds 2-5 temporary troops to their army. While these troops are weak and more likely to run away than kill anything, they act as a great buffer and allow the English to drain these seemingly invincible Viking armies. In some cases the English get to flee/retreat (slight difference between the to) all their regular troops out of a city while inflicting wounds on the vikings, while the vikings only manage to kill some Fyrd troops which wold disappear after the battle anyway. However, English attacks on Vikings are also risky as they get no Fyrd and the defender rolls first, as such a poorly judged or unlucky English attack can go very badly. And this leads me to one of the big strengths of the game: it is basically impossible to work out the 'best' move. Every troop has unique dice, and factions have buff/debuff cards that they can play into battles. As such you just can't work out the odds of winning without a 20 minutes and a spreadsheet, so you just don't try, you know you have 8 troops, 3 of which are berserkers and your opponent has 5 troops but will get 2-5 extras, and you have a card you might play, and they might too and you just have to go with your gut and just see what the dice will do! It means there is pretty limited AP, there is a little agonising but because you can't be sure you just have to make a decision. I imagine this will help even more when the game is played 4P (two teams of two) as you then can't quarterback your teammate as you don't know the 'best' move any more than they do, so you'll just have to let them decide and hope the dice are kind. I can see all this luck being an issue for some, but as this is very much a light wargame, that once you learnt it you could play in an hour or so, and because your roll so so many dice, everything will average out, and one bad roll won't seemingly end your chances. The best team will still likely win: in our game this seems to be my partner who is systematic purging the land of my rather ineffective viking invasions!

You finally have it! Congrats. Love the thematic assymetry and the "realistic look" to the art style.

Thanks, it lives up to all my hopes, it is so much fun to place, and can't wait to get a four player game in.

Glad you finally got this game and that it lives up to your expectations :)

I've yet to own one of these types of games but I'd have fun with it for sure. I'd just need... a bigger table haha

This game looks so awesome. I really think I'd love to play it but I think I would struggle to get it to the table. It doesn't have a solo mode does it?

Not as far as I can see, it seems really designed for four players, although it plays great at 2 players, we finished it last night and it was brilliant fun.

There might be a fan made solo mode, but not that I have seen.