A Whole New World - Board Game Genres You Haven't Tapped Into

What are some board game genres you've never imagined yourself getting into, but have growing interest in? What do you think is the reason behind your sudden interest and why do you think you might like them?

By "genre," some examples are:

It's hard to imagine starting a new genre during the Pandemic.  I've thought about 18xx - seems like so many of them that I'd have to do some research on where to start.  I'd like to try some 1 vs. all as well.  Have Fury of Dracula, but have not played it yet.

Definitely 18xx. Closest I've come to is Arkwright and only one person in my group wants to play that with me.

Being a historian I love the idea of 18xx but I just haven't had one draw my attention too much (maybe someone here can suggest a great one).

Not an expert in that area either so... :D

I did find it interesting that in the pdf rulebook for #Nemo's War (Second Edition), there's a short commentary about how the second edition's rulebook was written to accommodate eurogamers, while the first edition's main audience was wargamers. I guess that means I'll be playing my first wargame soon? Then again, if I go with that mindset, I already got in Root. I'm sure most wargamers don't like Root being considered a wargame though haha (it's currently ranked #14 within that category on BGG) 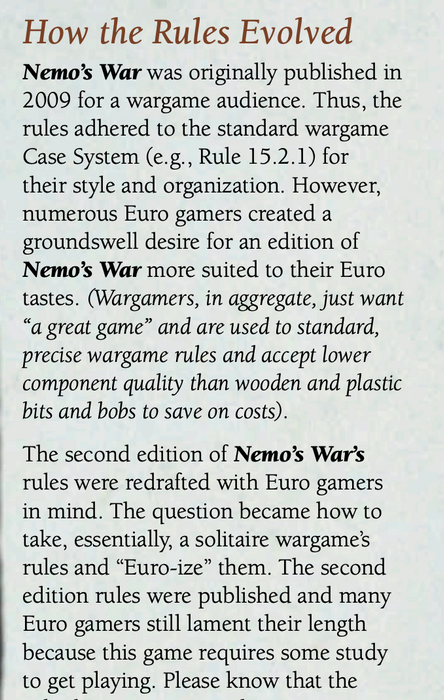 Hmm... it'll be interesting to hear what you think after playing.

I have been becoming increasingly interested in solo RPGs, I am thinking of stuff like #Thousand Year Old Vampire (First Printing).

I still have no idea how some of those games work. Should check it out some day :)

Cool.  I think this would appeal to me as well.  But at the moment I have about 5 solo games to get through on the Switch (most are some form of RPG).

For me it's got to be solo games. I've still yet to buy a game strictly for the solo play, but I do think about it.

Which game have you "window shopped" the most so far with mostly solo in mind?

I've eyed #Nemo's War (Second Edition) for quite a while. Then of course there's #Spirit Island. @3MBG has mentioned how good the solo mode is for #Circadians: First Light, which is a game I was mildly interested in even before I knew that, so that would be on my list as well.

Two genres that I've yet to explore are 18xx and war games. I am definitely interested in both of them and will eventually attempt to acquire one from each category.@Marshwiggle92 recommended a good solo 18xx so I'll definitely start there. As far as a war game - I don't really know. Maybe#Thunderbolt Apache Leader?

For me, 18xx is still completely outside of my interests. Wargames I'm at least slightly more open to haha. I'd say #Navajo Wars is the closest one in that category, only because @Marshwiggle92 has spoken so highly of it

Those are the two that came to mind as genres I've never been interested in, only I'm still not interested in them. I'd say I'm slightly more interested in wargames than 18XX, but its still pretty low on my scale.

Simpler games for me. For example, I've been enjoying #Herbaceous which is really not the type of game I would have thought myself choosing to play. I love the bigger, more complex games and tend to avoid the short, simple games, but I think I've been missing out. Besides, they're great for when you don't have more than half an hour to play (or less) but still want to get a game in.

Easy, thinkie, non-combative games - for those who want to keep their brain active (but not stressed) while playing.