Before I begin, I was sent a prototype of the game, and will receive a production copy of the game should it fund. This is not a paid preview. If you would rather watch a video of this review you can check it out below. Learn how to get your own copy here.

You know what I almost never play? Civ games. You know why? I am not good at them…border line horrible. However, I do have a couple of friends that dig them, and because of that I have played my fair share of them, and just like with 4X games, I have grown to have a real respect for them, particularly if they can keep the game moving, because like with 4X games I find that it is not hard for them to go on and on.

In Monuments you take control of an ancient civilization striving for dominance. Like in most civ games, you will be collecting the resources you need to build…things. Of course these things will let you create other things. Use these things to rule the world! Literally! What? Not enough details? OK. You will be ruling land, which will give you access to resources, these resources will be used to build towns, and bridges, and boats, and armies, and aircraft, and, of course the titular monuments. To do all of this you will either play a card, or pick up all your discarded cards each turn. These cards will allow you to build, make baby workers, attack, gain resources, build buildings, move, upgrade cards, or build your monument.

Now, let’s talk about these beasts! As you play the game you will be building levels of your monument. As you build a part of the monument you will literally get to build it up on the board, with the interlocking plastic pieces. The building of the monument represents time passing, as these wonders of the world were clearly created over generations. As you build them higher and higher you unlock new techs, and get new rewards.

Now what would a civ game be without combat? Lame. So to keep things from becoming lame you can, of course attack those maggots across the table…lovely people sharing a game day with you. Combat is managed through dice, and each unit has its own number of dice that come with it. When you engage in combat you create dice pools for each side and roll the dice. Whomever loses, has units damaged or destroyed according to how much they lost the combat by. The game will end after one player builds the final level of their monument, and all players have had equal turns. The player with the most points at the end of the game, as determined by a variety of scoring categories, will be crowned the winner.

I really appreciate that the game does move along a pretty good clip. Turns are quick, as options are fairly limited by the cards still in your hand. However, what is delightful about it is that within the relatively limited choices, there is a large decision space. This is especially delightful when it comes to the decision of when to pick the cards up vs leave them sitting on the table.

And of course. The monuments themselves are delightful to play with. It is certainly satisfying to build these bad boys up on the table in front of you. Great toy factor.

The board looks nice on the table, and it is clear, but it does not pop. If you look closely at the hexes you will see it looks pretty darn good, but you have to go looking for it. I also wish the player boards were more exciting, and specific to the factions. Perhaps they will be in the final version.

I spent a lot of time with the solo AI, and it works. I think it is something that with a bit more development will work quite well, though when I played it the AI was a little “dumber” than I would have liked, and left me making more choices than I usually like. It is simple, and relatively quick, but could be refined a bit more.

The biggest issue I have with the game is the rules are not fully clear, yet. Let me be clear though. The rules are still in an early version, but I had a harder time than I would have liked to learn how the game works, and found myself having to go back to the rules, and view some other videos to really make sure I knew what I was doing. This is imminently fixable, but make sure you take a look at the rules yourself.

I also think that while the solo mode, and low player count works, I think that, like many vic games, this is a game that will work best at higher player counts.

Monuments is a game that will feel familiar to civ game fans. While it does not reinvent the genre, it is one that is easy to learn at its core, relatively streamlined and plays quickly…for a civ game due to its limited card play options you are faced with each turn. The solo mode has promise, but is not quite there yet, nor are the rules quite there yet in their early form. This is a game that works at low player counts, but that will likely work better at max player count. Certainly a game for civ game fans to check out.

People who write long articles get sent to the mines!

* Quick civ game, with relatively simple mechanics
* Strong decision space within limited options
* Monuments are fun to play with
* Rules will need a few more drafts before they are ready for primetime
* Solo mode has promise, but needs a little more refinement
* Game will play better at higher player counts
* A game to check out for a civ fan

So i backed this original Kickstarter, but as my collection grew over 2020, this game lost its luster for me in 2021 with everything else that I've seen and that it's up against. It's a bit sad for me because Martin Looij is really cool and nice. But at the end of the day, we can only get/keep so many games and I didn't see this one getting played or asked for over others in my collection.

There are sooooo many games to play!!!

Let's play them all

I think @KingChaos would agree that I should no longer trust reviews from a guy who can't even score a single point in a game of #Guild Master LOL. But seriously I don't think this sounds like a game I would be into anyway. 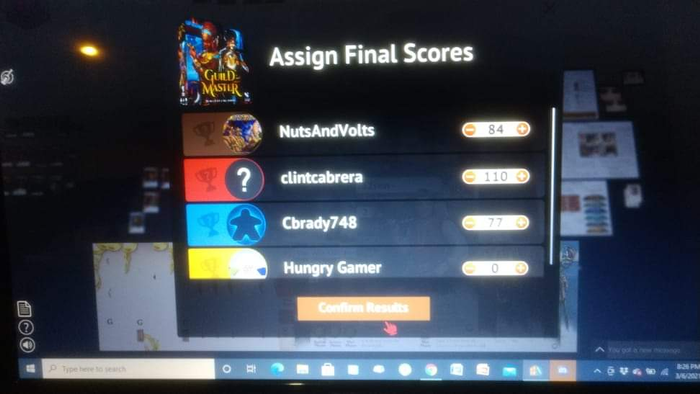 Oh he's terrible. He let a noob like me beat him by 77. At least his flesh vessel did alright