At Long Last - My BoxThrone Has Arrived!

updated 4 days ago | posted 9 days ago

The day has finally come. My BoxThrone I've been waiting for is here. After spending way too much time assembling it, here is the finished product: 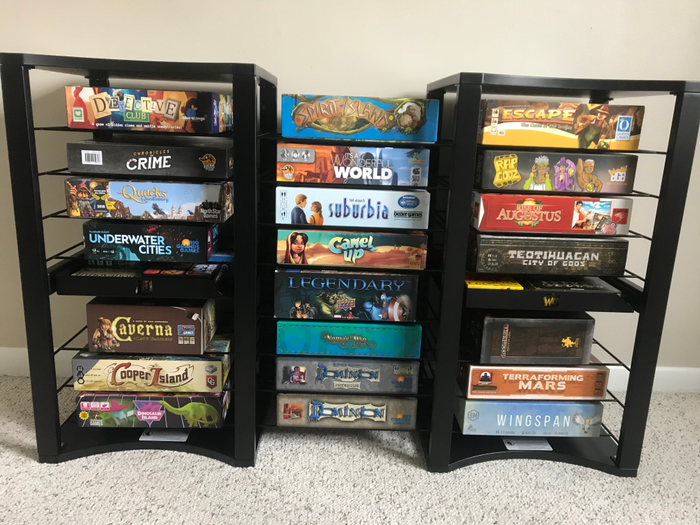 I only bought the smallest size it came in. It comes with 2 bases and tops for the 2 towers and 24 wire shelves. I had added on the sliding drawers for smaller games. There are 30 games in total stored between the shelves and drawers. As you can see, like many including @TK2187 had suggested, it is already full haha. But the good news is now the bookcase where all these games were is now empty, so I can figure out how to refill that with the games that have been hiding away in my closet LOL.

Things I've learned through this process include:

I pondered getting one of those but my spouse would have never agreed to it, so I am putting all my hopes on this beaut.

Boy, does your setup look nice!

Thanks! The Kallax insert probably does the same thing for a whole lot less lol.

I'm trying to figure out how thta system works - what is supporting the back side of the shelves?

I do not think anything is supporting it directly. I guess they have tried to a variety of games and the shelves hold with only the front part attached to the vertical walls.

Hmm, that'd make me nervous, personally. You'll have to let us know how it goes.

That is awesome! It looks so easy to pull games out of there, since there's no more "bottom of the stack" anymore! Think you'll eventually get more of them to accommodate your growing collection?

The only thing I worry about is the bottoms of the boxes getting worn a bit sliding on the shelves when they get pulled out. I fully admit that's super OCD of me though lol. I probably could have used a more expensive/bigger tower, but Sarah would have probably killed me. Maybe sometime in the future though.

Oh I'd think about that too if I had it. My friend makes fun of my for wanting things a "certain way" when it comes to my games, so I'm right there with you with the OCD lol. TBH sometimes my wife worries that I actually have mild OCD haha.

Oh I'm right there with you and @cbrady748, it's like the first thought that came to my mind when I saw those wires 😆

Yeah Sarah always says she knows I like a game based on how particular I am when it comes to putting it back in the box. Some games I'm like eh yeah whatever thats fine and other's I'm like no wait this has to go in this bag lol.

It doesn't seem so bad..but that's from me having not actually pulled any of them out of there yet lol. I guess it's better than them being potentially dented from the weight of whatever's on top?

That's beautiful!  But I can see a lot of wasted inches there so I don't know how efficient a storage system it is haha. Looks like there's lots of space for stacking things on top though!

Hahaha yeah I ran out of TTR sized boxes so some of the spacing is suspect. All the more reason to get the longer shelves next time.

As as far as on top goes..I put all the rest of my stuff in the bookcase. It is full - Sarah says this is confirmation we don't need more games lol. I had to put #Viticulture: Essential Edition and #Spirit Island: Branch & Claw on top of the boxthrone.

I remember liking your post but looks like I never got around to commenting!! Have you already given in and bought another one? lol. Also, if you have a tall box you need to fit in, do you basically remove a row of wires?

I haven't been able to fit in gaming time for a while now, but seeing your picture is making me want to play!

So cool!  My kids are still too young to consider displaying my games... hopefully when they get older.