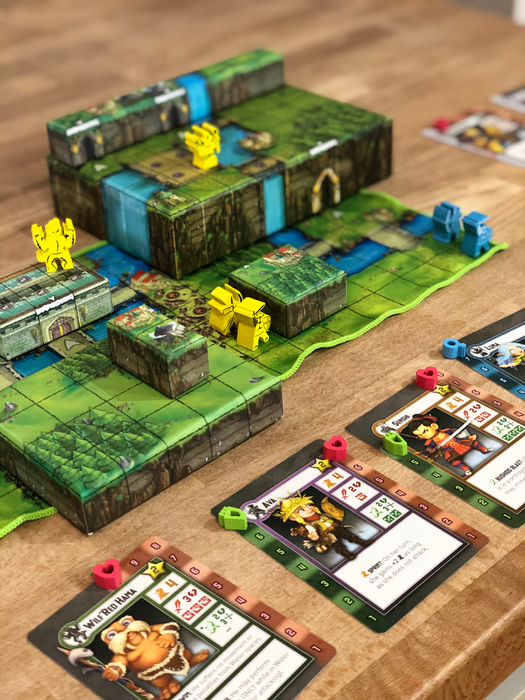 I finally got in a solo game of Tiny Epic Tactics.  I should start by saying I'm really excited to play this with other people.

Overall I thought the solo game was okay.  I'm sure I did some things wrong so maybe it'll move up in future plays but I can tell the strength of this game is in multiplayer.  Some quick pros and cons.

Pros: Quick and easy to set up and tear down (about 35 minutes from set up to putting the game away).  It was wicked easy to play one handed (holding a 5 month old).  The solo cards are pretty easy to run and aren't confusing.  I did get to have a semi feel of Final Fantasy Tactics.

Cons: I can see the solo mode getting old and dry fast.  You have the same objective each time.  I also don't love that the crystals you are chasing are always in the same dungeons.  I wish it was more random.  I think this con is just for the game as a whole.  Many of the character abilities (and I've seen people asking a lot of clarifying questions on BGG) don't make sense just in an of themselves.  This slows the game a bit as you try to figure it out (hoping you'd get it right).

Overall: I will definitely play solo again but it won't be at the top of my solo list.  But I know I'm gonna have a blast multiplayer.

Anyone else have a chance to play either mode?

That guy looks like the Lorax. Anyway, it looks fun! I've been curious since it seems to come up a lot in different threads. How many characters are there? (this is starting to bring back some Final Fantasy memories).

Seems like you often mention that you play solo while holding your 5 month old lol. Imagine what you'd be capable of when you have access to both hands!

That guy is the Lorax. He speaks for the trees. He has spoken.

Two games at once?!  Haha, no it would make solo gaming a bit easier.  Hopefully in a few more months she'll be a little more independent.  I'm excited though because my 7 year old has expressed interest in playing Tactics with me.

That looks really neat! Size, quality of the components, and variety of components. Interested to see how it plays.

I haven't. And, this one doesn't really interest me. But I really do appreciate seeing user reviews. I feel like there are more of those being posted and I can't express how much I appreciate seeing those opinions, instead of "just professional reviewers."

I like professional of course, but yeah I like just seeing what every day people think.  Sometimes I kind of think the professionals can be too hard on stuff because they play so many.

I got a solo play in on Tuesday to learn it. I was about to post about it but then I saw yours! So good job beating me to the punch haha

I hear ya when you say this will thrive multiplayer. I had fun playing solo--as fun as one can while learning and trying to figure out the rules--but yes, it does look to be a much better competitive game.

What I do like about the solo variant is the dungeons. Mainly, that the terrain flips open to reveal a dungeon. A fun use of space when real estate is severely limited as it is. It was tough (I lost), but I do appreciate the solo option. I'll probably won't play it as much solo as I play other TE games solo, but I think it will satisfy a need all the same. 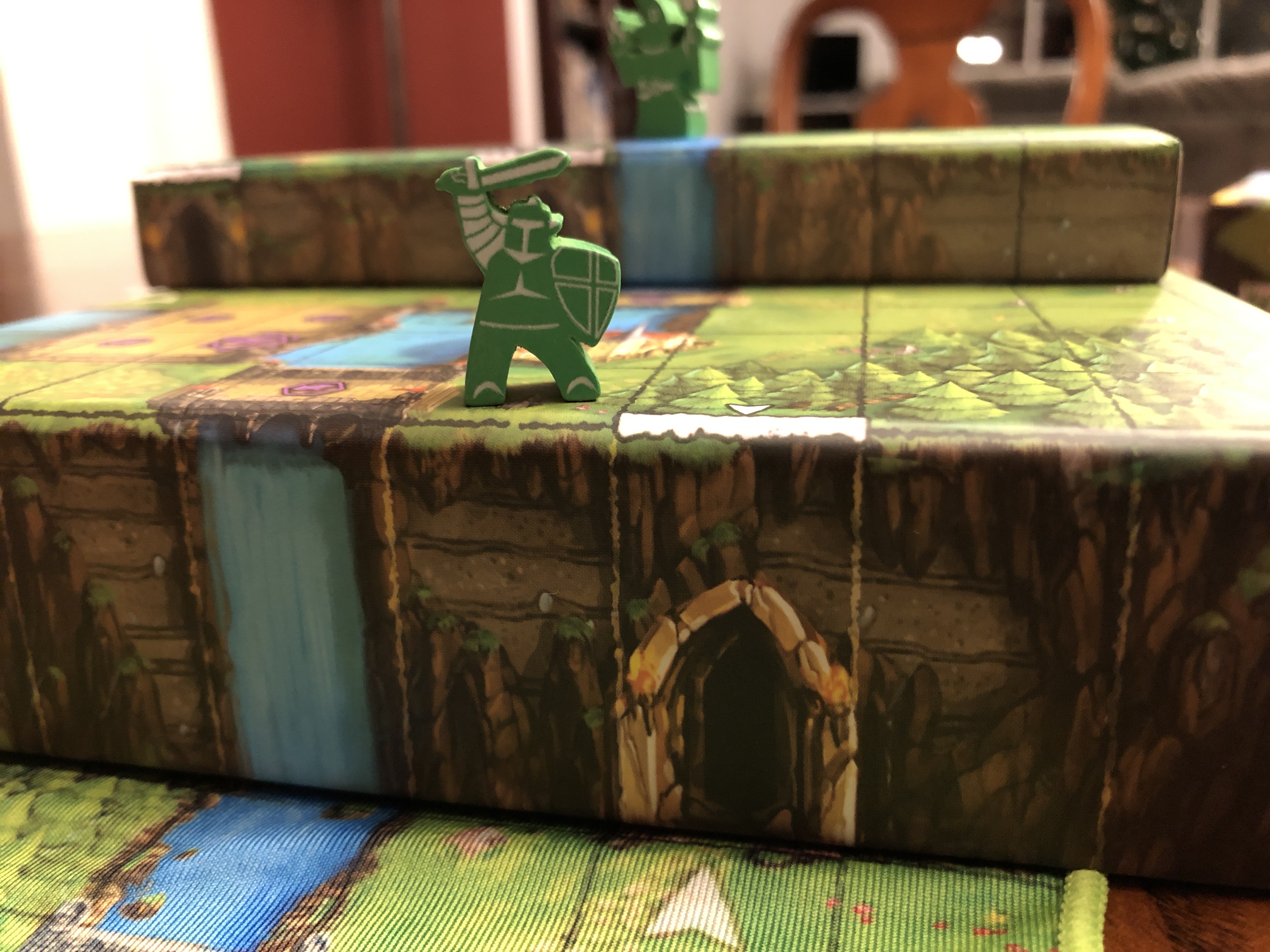 Thanks for sharing your photos and your thoughts!  I agree the dungeon aspect is an ingenious way of using all the space.  I’d even enjoy figuring out how it could be incorporated into multiplayer (but maybe I shouldn’t get ahead of myself 😂).  I also do really like the timing mechanism.  It makes you weigh needing to capture some enemies versus going after diamonds.  I actually won on my last turn.  I was able to kind of force the AI to follow me down the terrain so I had access to the dungeons.

Did you find any of the character abilities that you used to be confusing?  There was one character that I used and I have no idea if I used her correctly.

There was one character I didn't really understand...but I can't remember which. I'm going to have to scour BGG for some clarifications before I play again. I agree things could be tighter in that aspect. A player shouldn't have to ask for clarification on anything. But perhaps that's my inner editor talking.

I just remember it seemed like my wizards attack/special ability were tied together and only useful against enemies that were adjacent.

Yeah, I think mine was something like that as well. I didn't really understand it, but it didn't seem applicable while I played anyway, so it didn't much matter.

Yeah, my issue is it looked like my character could only do 2 damage to its primary target with the ability to damage adjacent targets.  Which made it seem underpowered to me.  Especially against the Solo cards because they don't encourage the solo meeples to be anywhere near each other.

I'm hoping to get in a game tomorrow, so we'll see how that goes. Gotta search the interwebs first though, see if I can't find some clarification before jumping into it again.

Let me know if you stumble across anything worth reading/checking out.  And how it goes.

Did another solo game tonight. I found it to be better this time...even though I lost even faster haha No complaints with abilities this time. Everything was pretty clear. Of course, I chose ones that weren’t confusing so there’s that. :)

Sweet, I'll probably try it out again soon.  Maybe I'll discard any characters who I don't understand and draw a new one that makes sense for this playthrough.  Did you win?

Sure didn’t. I lost my fourth character on my last turn with three more crystals to go. Despite that horrendous loss, it was more enjoyable than the first time.

Great!  I can’t wait to try it again then.  Hope to get it to the table with a group sometime soon as well.

This is great! Thanks for the write-up. I’ve never actually seen this one set up before and it looks interesting. Probably not one I’ll ever add to the collection but it does look neat.

As soon as I saw the KS I knew I was going to back it.  It's just too much like my all time favorite video game to have passed up.  But I get that, sometimes I like the look of a game and hope someone else will have it so I can play it but not have to buy because it won't get played a lot.  I know TET will be played a lot within my group.

Thanks for the review. I skipped this one on KS. The last one I did was Tiny Epic Mechs. It is a pretty fun little game. I think I still like galaxies the best. The rest I don't ever get to the table. I do like their marketing plan though. A surprising amount of play and bits in a tiny box.

Galaxies is the one that I’m most interested in. I’m a sucker for good space themes.

Galaxies is still my favorite, and I've played all of the TE games (except Dinosaurs, obviously).

I might let you know how it is, if I open it.  I'm actually going to post a poll soon and ask for some advice.  You might be able to answer for me.

Cool, I also have Tiny Epic Zombies and that gets out quite a bit.  I like it, it's pretty simple in my opinion but fun and quick.  I played TE Western before and I enjoyed that (I wouldn't buy it but I'd play it again).  I didn't really care for TE Kingdoms when I played.  I haven't played Galaxies yet (but I did pick it up and I've heard great things), although I'm considering a return and different purchase.