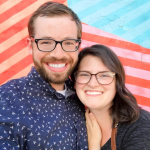 In Kyoto, players will take on the role of delegates from a country meeting with one another to address the issue of climate change. Players will try to work together to hit reduction targets and secure the necessary funds while also attempting to satisfy special interest groups that may be secretly influencing their decisions. 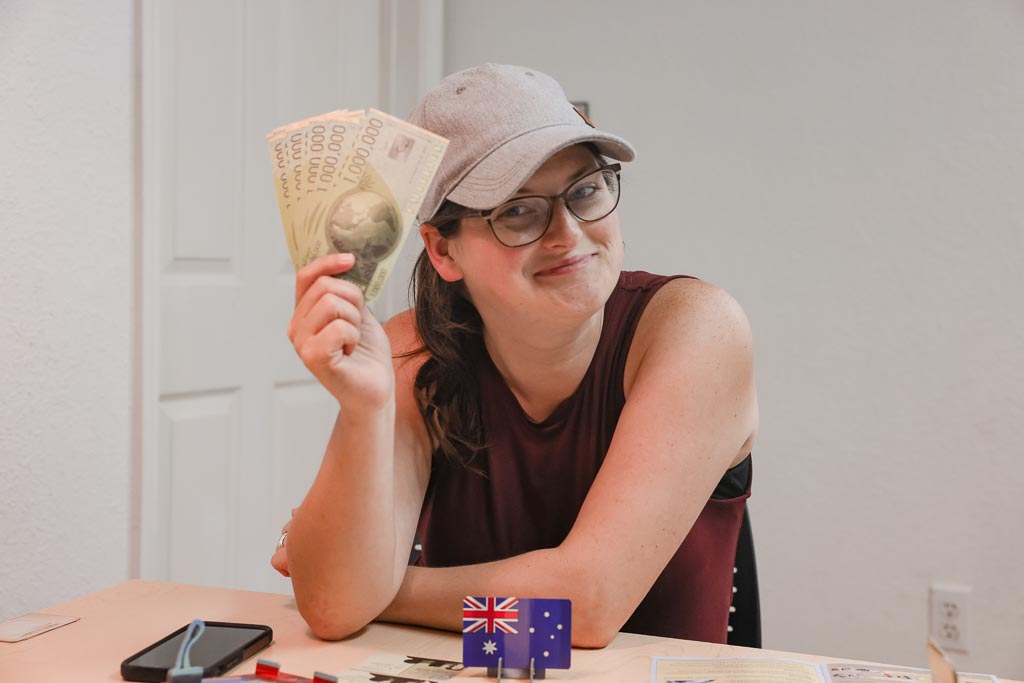 How Do You Play Kyoto?
Your goal in Kyoto is to save the planet while becoming the most wealthy country.

Kyoto is played over 12 negotiation rounds, though the game can end suddenly if the environmental damage reaches a critical threshold. Each player also has 2 secret agendas they must work to fulfill throughout the game. These can sometimes cause players to work against the group’s goals.

A negotiation round begins by a player, acting as speaker, selecting a study card and reading it to the group. This study card provides the goal for the negotiation round, presenting a shared reduction goal, funding goal, and the impact (damage) that will happen if the goals of the round are not met.

On each study card there is also a hidden impact, visible only to the speaker. These are kept secret from the other countries and are additional damages that will impact the planet if the round is unsuccessful. Speakers can use this knowledge to further their secret agendas through winning or losing the round.

After the study is read to the group, a 90 second timer is started (we used our phones) and during this time all players can contribute to the goal either by using affluence cards to aid in the reduction goal, contributing money to the funding goal, both, or neither if they cannot or wish to not contribute at all.

After the 90 seconds is over you’ll resolve the outcome. If you were successful, the money contributed along with the necessary affluence cards for the reduction goal are kept and added to the center area. If you were unsuccessful, the negative impacts are resolved, leading to either a species to go extinct, temperatures to rise, or pollution to worsen.

Points are awarded to each country for affluence cards, agenda cards, and remaining money.

If the players succeeded in making it all 12 rounds, the winner is the country with the most points.

If the players failed, the winner is the country with the second-most points as the greediest country is excluded. 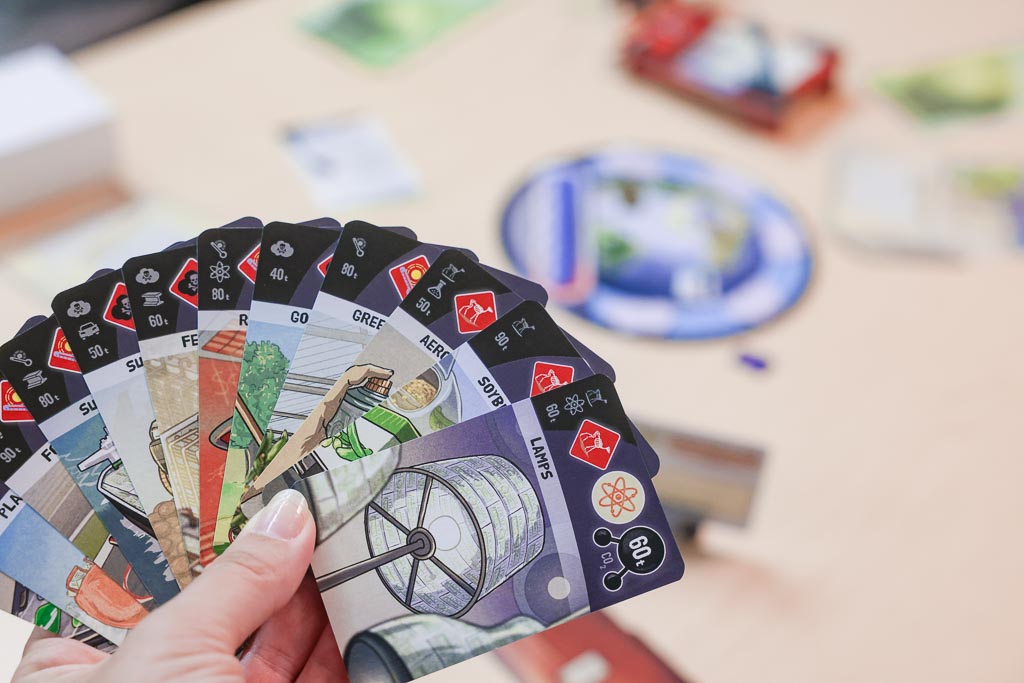 What Do We Think?
Kyoto is an interesting game that despite its political theme isn’t overly political.

What we enjoyed about it was that we were able to have the challenges of negotiation, debate, and bribery in a quick play experience.

Often games of this nature and theme can either be too complicated, overstay their welcome, or both. Kyoto bypasses both of those! Playing in just about 30 minutes, we found it to make for a great filler when you want a game that is light but more interesting than a typical party game.

Kyoto is well made with nice art and decent components. While not a party game, it lends itself to a party game feel, mostly because it invites a sense of playful play-acting as everyone takes on a role as a unique country, often giving their best accents a go at the same time.

Quick Negotiations
The 90 second time crunch to get your negotiations out on the table felt right. Just enough time to get things done while short enough to keep things tight. If someone is trying to conceal their secret agenda, it becomes harder when they really have to push the conversation in a particular direction in such a short period of time.

If you like a more robust discussion period, you might also find Kyoto lacking. This game is designed to be quick, that means the time to make long winded, well thought out arguments is gone. (Thankfully for some players I’m sure.) Often our reasonings for why someone should put more money in the pot consisted of holding up a penguin and asking the other if they were prepared to live in a world where “Happy Feet” could no longer have a live action movie. No? Well then you better contribute another million! 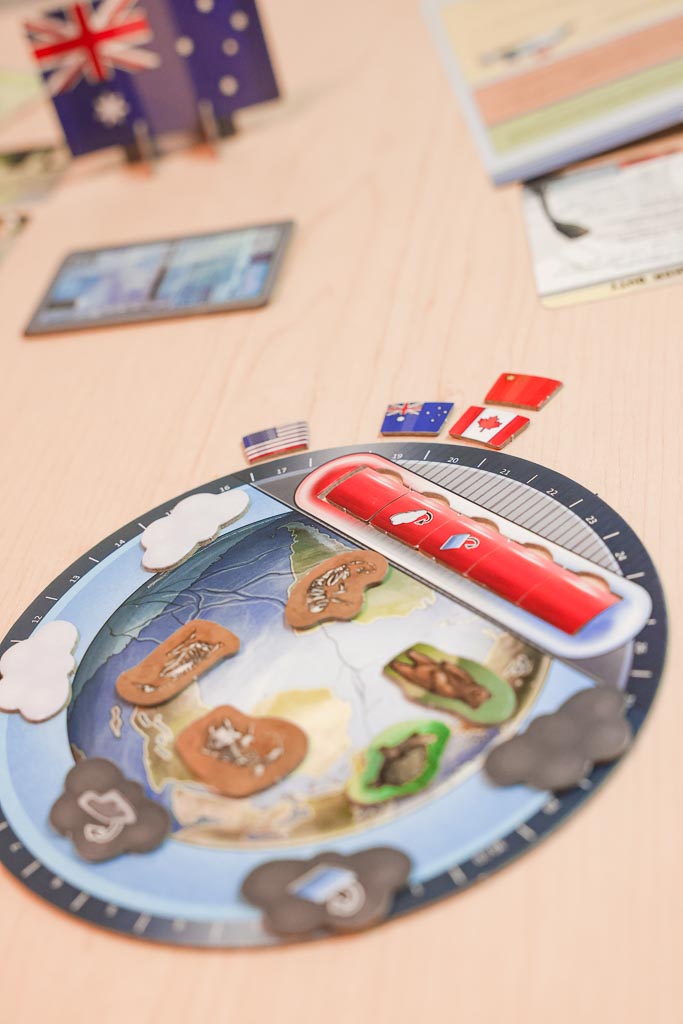 Political in Theme but Not in Play
If you are less inclined to want to insert even more politics into your life, I totally get it. For us, board games are a welcome escape from all of that.

That being said, we thought Kyoto did a great job straddling the line between its theme and keeping things fun. While the game itself centers around climate change, we thought the negotiation elements of needing to find a way to solve a problem while fulfilling secret, sometimes conflicting goals to be the star.

In this way, I think Kyoto could be a fun educational game for a Jr. High or High School player. It is often confusing from the outside why seemingly important issues can’t be agreed upon and resolved. Kyoto shows that balancing the interests of your country’s wealth and other outside factors might make seemingly straightforward issues more difficult.

I do think the theme of the game itself, though well implemented, may hurt it in the long run because it doesn’t offer players a guaranteed escape from the world’s issues, even if for 30 minutes.

(If you’re looking for a completely apolitical negotiation game I highly recommend Bohnanza which is still my all time favorite in this category.)

Summary
Kyoto is a fun option for any fan of social negotiation games that involve bribery, secret goals, and a high amount of verbal play. It’s biggest strength is the quick time frame the game plays out in but we fear its biggest drawback could be the political nature of the game which might lead those who are looking to board games as an escape from real world problems to pass.

With a party game feel, Kyoto serves as a unique filler for players looking for a shorter game that is both fun and interesting.

I have both never heard of this and would absolutely play that. I think I am going to agree with you that having negotiation, debate, and bribery in a quick play experience if going to be fantastic.