Dice Forge by Régis Bonnessée (Seasons, Lords of Xidit) is a dice rolling game for 2-4 players that plays in about 45 minutes. Players upgrade their dice during the game by replacing the dice faces (and wait ‘til you see the box insert!)

Lift the cover of Dice Forge, and you’ll find a large sleeve, held in place with a purple band. Dice and other components are arranged neatly along the sides.

Below the sleeve with the purple band is a folded game board.

Under the folded game board you can see cards, tokens, pawns, and player boards.

Everything has a place. Even the smallest of cardboard bits.

When the sleeve is removed from the tray, it is put back into place on top of the box insert.

The tray holds dice faces that players can purchase throughout the game to upgrade their dice.

The dice are designed so that one of the plastic squares can be used to pry another one off of a die. A can opener with an angled tip also works well for this. It gives you leverage, and saves wear on the plastic bits.

The game board is not just flat. It has indentations where the cards will go. The cards fit into the board, physically and aesthetically. They continue the artwork of the board.

The markings at each spot show the cost for the card in that spot. There are two options for the cards, adding variability to the game.

The different sets of cards have their own slots in the box insert.

The player boards have cutouts for the cubes, so that they are not accidentally bumped.

Not only does the box organize the components, it acts as a component itself. The game board fits up against a side of the box, and the box becomes scenery.

The components and organization make it inviting to play.

Players roll their dice and then apply the effects of the two faces shown. This usually means acquiring resources. If the active player has a card that grants them special effects, they resolve those cards.

The active player must choose whether to spend gold to buy a new die face, or to spend resources for a card.

Strong dice and powerful cards will help during the game, but only Glory Points count in the end.

Dice Forge is similar in length and complexity to King of Tokyo and Machi Koro. There is also a comparable level of player interaction. While players do not attack other players, like in King of Tokyo, actions from one player can affect other players. For example, with the Minotaur card, all other players roll their dice, but lose the resources or Glory Points instead of gaining them.

Widely available for about $36, Dice Forge has great components and thoughtful extras that make you feel like you’re getting a bargain. No extra costs for a box insert or player mat overlays required. Dice Forge also saves time, because it has everything waiting for you when you open the box. This is the game you’ll want to bring to game night. 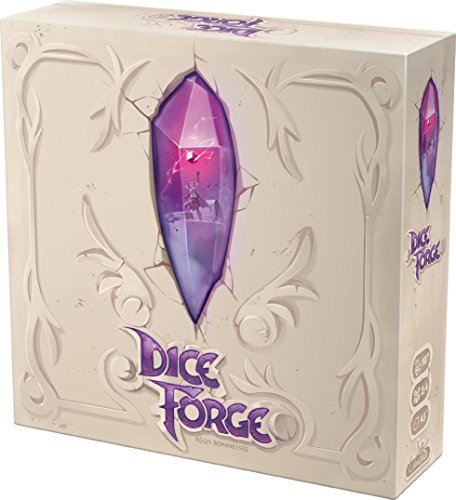 I want to try this game at some point

I think it’s worth a try. I think it was just on sale somewhere for $25. Amazon I think..

Nice! I really want to get a sense of how the dice crafting works... meaning if its too fiddly or not... before I buy it.

In game I really like it a lot! The scrap die faces are later used for scoring which is cool. It’s mainly tear down that’s the issue with the dice. You essentially have to remove every die face that was added on and the replace the starter faces. Kind of like a deck builder.

I'd like to try the expansion with the base game we have.  I like the based game ok but feel it runs out of steam a little too early.

I actually just sold my copy of Dice Forge. Don’t get me wrong, I thought the game was good and I loved the mechanic of crafting my own dice, but there were a few big issues for me:

1. The game seemed too short. I think it could’ve easily been better with a couple more rounds.

2. Because it was so short, it made deconstructing the dice that much more tedious and annoying. Not to mention putting everything back where it belongs. If the game was longer, this would be more worth the tear down.

3. It didn’t get to the table enough for me to keep it. It was too short to have as a main game for my groups, and too long to call a filler for other groups.

Those problems aside, I still think it’s a fun game. It’s artwork is beautiful and the components and box insert are top notch. I liked how functional the insert was. I was also a great and unique take on an engine builder with different routes to victory. Cool game, just not for my groups I guess.

Very much agree with point #2! Tear down on this one is a major drawback.

Definitely. I know tear down is never “fun” but this game’s tear down feels like work after a short and unfulfilling game, even if I won haha

Another comment about the box insert: NOTHING EVER MOVED. Other than the finicky dice face tray, nothing ever was displaced no matter how it was stored or carried. Great quality👍🏻