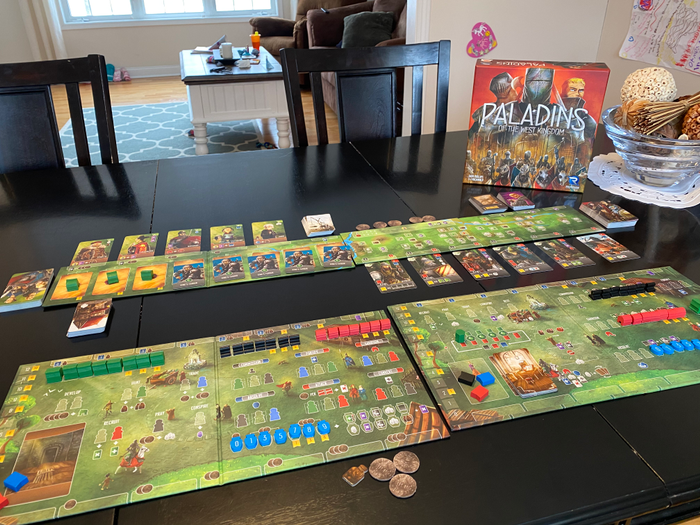 Had a chance to play the solo mode of #Paladins of the West Kingdom over the weekend and wanted to share my initial thoughts about the game.

(+) The art style is incredible. The art is evocative without being terribly stereotypical, something which is important considering the theme.

(+) The component quality is amazing. The cards feel great with a nice linen finish. The player boards and main boards are durable and  glossy. The wooden meeples are great.

(+/-) The rulebook is serviceable. It’s mostly good but there were a few sections that I had to read a couple of times, and one rule that I couldn’t figure out until I watched a gameplay video.

(-) The Box size is too small. There is a lot of game and it just fits in the box. Why not make it a little bit bigger?

(+) There is a LOT of game here, with a lot of interlocking and codependent mechanics.

(+) The solo mode is easy to run and simulates playing against a real person. This is not a “beat your high score” type of AI. Multiple times the AI foiled my plan by placing first a worker where I was going to go, and then by taking a space on the main board that was essential to my plan.

(+) Resources can be tight which makes for really interesting decisions- especially with the suspicion/criminal mechanic. Do you take a criminal on your team and hope to get rewarded with some extra coin? But will that trigger an inquisition by the King... which could land you a debt and negative VPs (unless you can pay that debt)?

(+) The Paladin selection are the beginning of each round is a brilliant idea. You draw 3, pick 1 to use, then send 1 to the top of the deck and 1 to the bottom of the deck. Correctly picking your Paladin is a huge part of this game.

(+/-) There is a lot to wrap your head around in this game. The systems are all connected and amazing and interesting but it can be overwhelming at first. I actually first set this up on Saturday but found I had not prepared enough to play the game. I needed to go back and watch some more videos and learn more about what I was doing. So I put it all away and tried again on Sunday. After additional preparation I was ready to go.

A Quick Rundown about what the game is actually about:

Your primary goal is to earn VPs. You can earn VPs by advancing your 3 tracks - Faith, Influence, and Combat. The higher your score on these tracks the more points you earn at the end of the game.

You advance those tracks by completing various actions on your player board. Actions make sense thematically as well.

Commissioning Monks to send out to convert the population requires a certain level of faith and increases your influence in the kingdom.

Fortifying towns across the West Kingdom requires a level of influence and increases your combat strength.

Sending garrisons out to protect the West Kingdom requires combat strength and increases the people’s faith.

There are 3 more major actions but you can start to see how the interlocking systems play off each other.

There is a LOT going on in this game.

This game is great. It was very overwhelming at first but by the end of my first game I was really into it. It’s definitely more thematic than I gave it credit for initially.  I’m not sure where I’d rank it right now (I’ve only played it 1.25 times) but I really enjoyed my first play of it.

This is also free on on Tabletopia.

Do you know about this? https://boardgamegeek.com/boardgameexpansion/296152/west-kingdom-tomesaga

Looks like it will be in the same vein as #The North Sea Runesaga Expansion where it ties in all of the games from the trilogy, but with the West Kingdom this time. I think it will be part of the March Kickstarter for Viscounts (which will also offer Architects and Paladins). Depending on the price, this will definitely be the most attractive kickstarter for me.

Looking at this game again, it's surprising how much more affordable all the games in these trilogies are!

Ahh this looks so good. Seems like it takes up a lot of table space!!

What would you say are some major differences from this game and others within that universe?

This is the only one I’ve played. I have played Raiders in the app. From what I’ve gathered Paladins is the heaviest of all of them. Raiders was a bit too simple for my taste. It was definitely good, just not a lot there. Perhaps the expansions for Raiders do a lot for the game?

I’ve heard that the expansions for Raiders are really good. I’ve only every played Raiders once and none of the others. Hopefully more of those games will enter my circles!

I really want to try this game! Still, while I like the art the board doesn’t grab me. Raiders has the village and pillage sections and this just appears to be spots in a field to me.

I can see that! Raiders has a lot more visually happening on the board but wishing a smaller space.

Yes it does. Still I’ll definitely give this game a go

Great, I look forward to hopefully hearing your thoughts on it!

Haha you got this! Or you can wait until Black Friday! Lol

Sorry you’ll have to wait in line

Let me explain the boards from a thematic sense - maybe that will help you. At the very center of the two long main boards is the city that you were building in Architects. If you look closely you can see a walled city.
To the left of the city are the kings orders, kings favors, and townspeople in the West Kingdom. You can recruit townspeople from the Kingdom and have them join you.
To the right of the city are lands on the frontier of the West Kingdom. It’s into these lands you’ll send your garrisons and monks to protect and fight with the outsiders. The outsiders can either be converted with faith or attacked. As you spread your strength you are able to garrison further afield, claiming new lands for the West Kingdom.
Your personal player board is essentially the town square inside that city. This is where you send workers to do your bidding.
1
[-]

That's helpful to know. I think I should really consider getting Architects in the near future, and then go for Paladins.

Oh this does help actually! Thanks

Similar to Leder Games + Kyle Ferrin's pairing, but perhaps even more so, I'm very attracted to the games by Garphill Games + The Mico (Mihajlo). They all seem to hit the right level of aesthetics, theme, and solid gameplay with a bit of twist on familiar mechanics.

Your sum-up gives a really nice picture of what the game is like and I think it'll be a good game for me and my wife! I'm pretty sure I'll eventually end up owning Raiders, Architects, Paladins, and the upcoming Viscounts within the upcoming 1-2 years xD

Yeah, good components and nice art are part of the whole board game experience.  Since I have Raiders I'm definitely drawn (pun intended) to these games.

Lol! Glad to have helped. I do think you and your wife will enjoy it, but there isn’t too much Player interaction early on.

This is one of my favourite solo games to play. Unfortunately I don’t often get it out because thinking about all the little bits & the set up and clean up often dissuades me .... and then trying to fit it all back in the box 😬. Great game though, always happy when I get a chance to play.

I was a very good review! I'm glad you enjoyed it, think I found the experience about the same or it took me a few plays to really get all the rules down but once I got him down it didn't seem too hard and in some ways it seems like it's a fairly easy game to teach.

Thank you! Yes, I think teaching the game would be easier than learning the game yourself. Now that I’ve got a handle on it you can explain the rules in a clear fashion.

Holy Iconography! Does it all make sense?

It’s overwhelming at first no doubt.  But once you dig in it’s not too bad.

Also, I'd imagine that if anyone's played Raiders or Architects, then a lot of the iconography might carry over or will at least be more intuitive?
1
[-]

Hmm. I have played Raiders in the app and the iconography didn’t help me learn Paladins.