Dominion 2nd Edition - Is it still worth it? 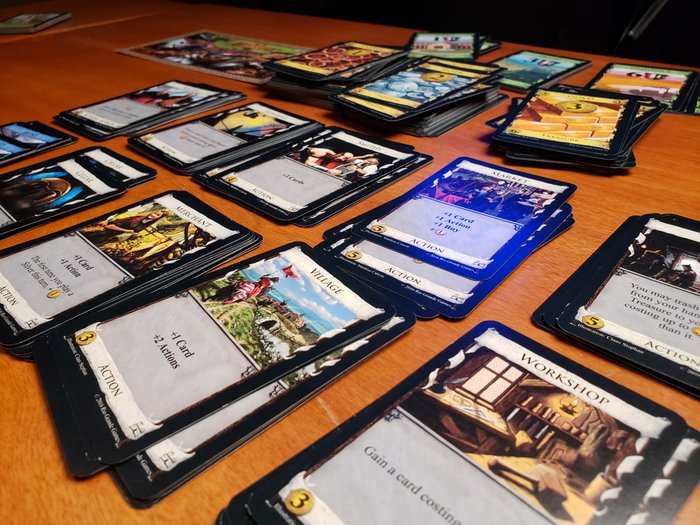 I got to play my second game of Dominion a few days ago! It was in preparation for our video next week where we'll make comparisons against #Fort. This will pretty much be my "first impressions" post since my last play was around 4-5 years ago when I was completely new to deck-building and had no idea what I was doing.

Super quick to learn - Takes less than 5 minutes to learn. The card powers are so straightforward that it doesn't need much explaining. Love it. It falls under one of my favorite categories of games where it's simple but deep.

Nice card design - Very little theme and odd box cover design aside, the card design is well done. Easily readable (both text and iconography) and gives impression of a game that has aged well (although, 2016 isn't that old at all). It also made me think about how a lot of the modern card-based games tend to look great, but aren't as practical.

Classic deck-building fun - I've played around 6-8 different deck-builders and Dominion is so far the best all-arounder. It delivers on satisfying combos, opportunities to try out many different strategies, and makes you feel like you've built a unique deck of your own. I also realize more and more that I love healthy dose of luck in games. It's fun to draw my hand and whether it's good/bad/meh, it becomes a nice test of how good of an engine I've built to combat the luck factor.

Easily recognizable cards - I like card-based games that have simple names and easily recognizable powers. When the variation in the deck is more subdued like in Dominion or #Concordia, it results in a game that really sticks with you. I like that after about halfway into the game, as I see Trent going after certain cards in the market, I could quickly develop that intuition of "Hmmmmmm I see what you're trying to do!"

Is it good for beginners? - Yes, definitely on the ease of learning the game and getting introduced to deck-building. But like I mentioned in the beginning, when I first played this 8 years ago, I was pretty lost. I was playing with two veterans and while they were having a blast pulling off wonderful combos and feeling satisfied, I had trouble keeping up and was getting more and more behind with each passing minute. It's a type of game that gives clear advantage to experienced players who are well aware of the different card powers and how they synergize off of each other. Still, this is often recommended as the must-play deck-builder for a reason, and I can't deny that. It's a relatively short game that even if your first play was an absolute failure, you'll quickly learn from your mistakes (and from observing other players) and get to take your revenge on the second play :)

Yes, this is still very much worth it. It was fun and I love that I can try out a completely different strategy next time around and still feel like it could be viable. Great game and I look forward to making the comparison against #Fort

I was introduced to Dominion through a board game meetup group and quickly became hooked. I almost went out and purchased it the following day. Even having simple rules and being beginner friendly, the cards provide a large decision space. Althought there are clear strategies (mainly involve shedding your deck as much as possible to get the biggest combos every turn), there are a lot of different paths to get there. Always something new to try and a ton of expansions that I would imagine keep adding more and more. One of my favorites for sure

It's amazing how simple it is to teach. I somewhat doubt it would be a game that my wife and I could play often, but I'm really glad to have revisited it. What's your favorite deck-builder so far?

I think Dominion is my favorite deck builder actually. I also own #Legendary: A Marvel Deck Building Game which is pretty good too. The only deck builder I haven't enjoyed so far has been #Hardback. I think my lack of vocabulary really shined with that one haha

This was my gateway into deckbuilding! I've played it with friends plenty of times and only recently started learning some of the deeper strategy possibilities. Looking to buy a copy soon if I can.

If I had the right person to play with at home, I could easily see getting in 3-4 plays a week haha

I need to play this one more.

We've had #Dominion: Second Edition for some time, having purchased the upgrade pack for the first edition a few years ago.  This was the first grown up game our son liked at about 8 years old.  We've also purchased #Dominion: Intrigue (Second Edition), also purchasing the upgrade pack for the first edition.  We still really enjoy this game and it's one of the few we can get our son (now 16) to play with us. Every game is different, and we use the randomizer cards to choose which cards to use. (Although we do replace a few of them if we pick cards that just don't fit well with the rest.)

I look forward to playing this for years to come.

Wow, playing Dominion at 8! How did he do at first? Was he able to win some of the games? I'm just curious because I have a 2 year old and hope that he'll love playing with his mom and dad haha

He did really well.  We had rented it from one of our local game stores, he liked it and wanted to rent it again a few months later.  We gave it to him for Christmas that year just as he turned 9.  He would win just as much as the rest of us did. We haven't tried any of the other expansions, but some friends of our have all of them.  We might try those in one of our game nights and see if we can get him to join us for those, too.

You can rent games from your FLGS?! That's so cool!

Yes, pre-covid, one of our local game stores would rent board games for 3 or 7 days. (I hope they're able to do it again.)  They've been doing that since they opened.  They would even credit up to $10 in rental money towards the purchase of the game you rented.  We took advantage of that when we'd rented Dominion twice and purchased it on the store's anniversary sale for an additional 20% off!

That sounds amazing! I'm gonna have to move to wherever you're at once they do it again. Haha

Interesting, I like the comparison of the classic staple game and the new flavor of the month!

I'm going to make a poll shortly to ask which comparison video everyone would like first. It'll be promoted on the home page and on Board Game Prices :)

Awesome@philryuh! Ready to see what people vote for

Love it! Looking forward to the poll. I am curious what people will want to hear about!

Somehow I've avoided playing this one, despite having multiple friends who own and like it. I haven't avoided it on purpose - just never got around to it. The first deck builder I played was #Star Realms, and the first I'll own will be #Dale of Merchants (all in on the latest kickstarter). I'd love to try Dominion one day.

My opinion on Dominion has always been "I can respect it" after the first play. Years later, the second play made me realize that it really is a great deck-builder. Any idea when Dale of Merchants will be arriving??

It's looking like it'll be December, which is actually a couple of months early! That probably also means it will barely be played until January since the holidays are always busy. Although this year could be different. We'll see!