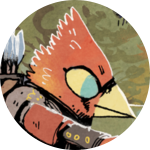 Oath is live and funded!  Who’s backing it?

I forgot about some other reasons I'm really excited about this.  The artwork, and meeples meeples, beautiful meeples.  I am such a fan of meeples in games especially meeples that are artistically done.

I am all the way out on this one. I love Leder Games, I LOVE Kyle Ferrin's art, but the presentation looks uninspired and I just don't think I have the kind of friends that this game would sing with. Maybe after the fact or cheaper in a BGG or Facebook local sale, but for over $100 shipped, I'm out.

So I still have to watch the rules/gameplay video from Cole before I officially back it.  But I have a strong feeling I will end up doing it for the following reasons.

1. Root is my favorite game and I'm confident that Leder will deliver.

2. As an historian a game that markets itself as creating a history has me licking my chops.  Plus one reviewer saying it's a game of historiography has me geeking out.

3. Even though $90 is high it comes with a lot of game (in my opinion).  This will also be the most I've spent on a game.  But having a neoprene mat and upgraded components as part of the KS edition has me really pleased with what I'll get for my money.

4. I'm planning on only buying one game this year (with the possibility of one expansion).  So I'm okay spending $90 o the one game I'm going to back.

The main question I'll have is how will it go when you play among different player numbers and different players.  I wonder if people will only have a vested interest if they are always involved in Oaths history.

I wish I were. But don't think I will.

In one calendar year I'll let you know how it is, haha.

Assuming there will be no delays.

That'll just give me more time to play the games I already have and love while I wait on it.

That is a positive outlook.

I do pretty well with delayed gratification which is obviously extremely helpful in this case.

I wish! But I'm sure someone in my game group will (fingers crossed). If they do, you can bet I'll be pushing to play that as soon as it arrives.

My group typically leans toward heavy-euros so this game is probably not the best for us, especially at $90. I wanted with all my heart to back it though. It is a bucketlist item of mine to back a game on kickstarter, I am being very picky though.
1 like
[-]

I get that.  You want to really make sure you like it if you're gonna back something.  And you want to make sure it's a game that will make it to the table.

Just waiting for the right one. One day I will find my true love.
1 like
[-]

I am looking forward to watching the rules video though. I am a sucker for digging into new mechanics.

Same here. I get caught in Youtube land all the time just watching playthroughs and instructional reviews of different games.

That's where I've been finding myself the past weeks (Everdell, Champions of Midgard, Five Tribes, etc.--and I'm still deciding what to get!)

At $90 for the only level, it's pretty steep, even if retail will be even higher. It does look like there will be a lot in the box, and that neoprene mat looks awesome.

My Twitter feed is full of backers, but it's not a game for my group so I'm out. I love the art style though.