"What games are similar to Catan?" - First Impressions of Concordia and My Wife's Take 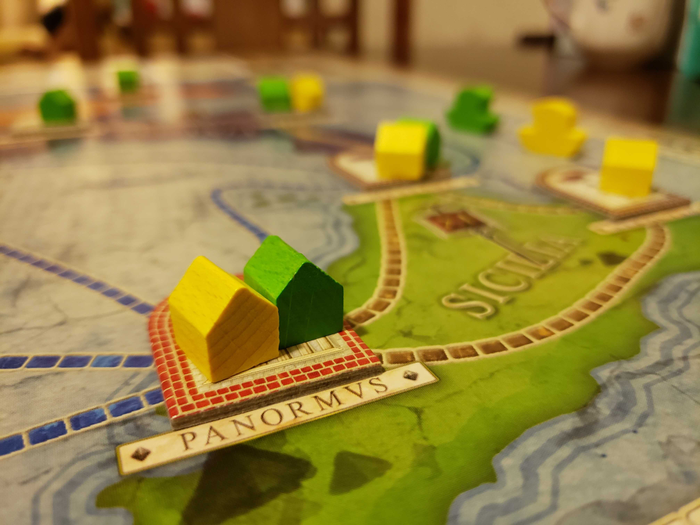 Some of you may remember that around late December, I shared that my wife and I played #Catan for the first time with her family during Thanksgiving. My wife absolutely enjoyed the experience and I immediately saw it as an opportunity to introduce her to modern board games. Since then, we've gone through maybe 10 different games together and we found many of our favorites such as #Viticulture: Essential Edition and #Clans of Caledonia.

Well, this post is about the latest addition to our collection, #Concordia. I've been eyeing on this since last year because (1) I love elegant midweight euros and (2) I watched several reviews and playthroughs and it seemed like it could potentially check off many of the parts that my wife likes in Catan. I'll list some resemblances below, as well as share some of our first impressions.

Overlaps between Catan and Concordia:

What makes Concordia "similar to Catan but better" for me + why it goes into our top 3 games to play together:

Here are some additional comments from my wife:

The last point also makes me wonder if it's an indicator that she might like deck-building games. I guess I'll find out when we get #Clank! Legacy: Acquisitions Incorporated to the table this week :)

Great review! I just picked this up, as well as the Salsa expansion, and am excited to try them out! I agree about the artwork but the mechanics look so smooth and fun!

Thank you! Salsa looks very cool too, I've heard great things about it. How many players will you be playing with?

What sold me on Salsa was the addition of the Forum Cards. I think it will add that extra layer of fun for my group. Right now it will just be me and my partner as soon as we find the time. Once our regular group can meet up again there will be about 4 or 5 of us.

So glad this worked out so well for y'all.

Thanks, I'm glad too. It would've been a big disappointment if she didn't like it because there were many signs of it being the right fit for us :D

Excellent! I am happy to see that for the most part the game was well received! I can understand the components not being up to snuff but it sounds like the game play carried you both through to an enjoyable experience! I love it!

Oh for sure, I'm sure we'll be getting this one out for quite a long time. I asked her which of the three games she'd like to upgrade the most (Viticulture, Concordia, and Clans of Caledonia) and she said Concordia since she found it the most disappointing/lacking. Will be ordering the metal coins and components soon :D

Edit: I think I should read through the little "booklet" that comes in the box that explains the theme of the game, I'm curious about the background about the gods now. Also, I noticed that the map has little details that seemed interesting haha. I think I remember seeing some weird creatures at sea, a mermaid, and others

Nice! i am sort of conflicted on your wife's desire to upgrade the game lol, is it because she likes the game or does she just hate the components that much!

Lol she likes all three of the games, so it was more of a matter of which upgrade would enhance our experience the most.

That makes sense since the other two games have very good production!

I like the art of Concordia, it is discretely colorful and simple :) I usually prefer wood tokens over the realistic ones, to me only the cloth token is odd from the set:)
Which metal coin set did you get for the game?

I'm planning to get these: https://www.topshelfgamer.com/products/coin-bundle-compatible-with-concordia

As for wood vs. deluxe resin/metal tokens (for "tool), I honestly don't know how I'll feel about them until I play with them since I typically prefer wood as well. We'll see!

Absolutely agree that wooden tokens are more enjoyable to play with (for me at least). I have played with realistic resources before and they are nice but I'd never pay extra for them in a game

This game used to be so high on my wish list. I still think it would be absolutely incredible but I’ve moved it down several pegs because I don’t think I could convince my family to play it and I don’t know if my game group would find it all that exciting.

After playing for the first time, my friend said "I had almost suggested that we play something else instead because it looked so bland", but he absolutely loved the experience of playing and wanted to play again at the following session.

Truly, give it a shot.  Though it may take some convincing to get people past how dull it looks, the actual gameplay experience is top notch; and I say that as someone who generally favors thematic games.

Thanks for the insight! The game is inching further back up the shortlist.

I would likewise recommend giving it a shot. As @philryuh said, it is a game that you can play 'badly' and still have a good time as it is a game that rewards you for everything and just rewards you more if you play 'better'. So hopefully your family will still enjoy getting to create their own little goods empire even if they don't immediately excel at it. I do agree though that even though you couldn't go crazy intense on the artwork as the board is pretty busy and contains a lot of information, they could have made it a bit prettier

I have a pretty good idea about your preferences, but not about your group's. Do they lean a lot more toward thematic games?

Yes, they definitely lean towards more thematic games. Our favorites so far have been Scythe and Imperial Assault. The most complicated game we’ve played together was Paladins of the West Kingdom.

Do they tend to prefer 'dudes on a map' kind of games over eurogames or is that not too important?

Neither of them are very familiar with Eurogame mechanisms. I’ve been slowly introducing those types of games over time. Before Covid we were planning on playing TM. But now we can’t. At least for a while.

I wonder if they might enjoy #Cry Havoc. It is a very tight area control game, pretty asymmetric which gives each action a really strong theme and the dynamic is a lot of fun.

Obviously you haven't played a ton, but how did you find the 2-player gameplay? Do you feel like it would be better at 3 or 4, or do you think it's just as strong at 2? What map did you use?

I had the same concern and asked around before buying, and while some commented the need to get a smaller map expansion, some said the smaller map in the base game does the job. Based on our first play on the smaller map, I felt that the base game alone is enough, but I'll likely go for an expansion if we overplay the smaller map (maybe after our 10th play or something?). I suppose it could feel a bit loose if players chose to "split off" in the beginning of the game from the get-go, but to me (1) that kind of play style wouldn't be as fun or interesting and (2) since players will often play the action where you select one of the provinces to produce goods in all of the cities, I thought it's just more beneficial to build houses in many of the same cities as your opponent earlier in the game.

For player counts, I'm honestly not sure. For smaller maps, I'd imagine 2p is still a great player count. But for larger ones, I could see 3p being the best to keep things tight and increase the likelihood of getting goods during another player's turn. I also feel like Concordia would scale quite well because the turns are simple and quick, and because you're more likely to get rich in goods and money at a faster rate since production happens more often.

Haha no worries, replying to comments online is much less important!

And that's cool, it sounds like playing at 2 players is still the full Concordia experience. I figure whenever I end up buying it, I'll spring for the version with the Venus expansion in the box. I believe that also includes another board with 2 maps.

You are much more aware of what is happening on the board at 2-p, 3-player is tight but managable. 4 and 5 player would be tough to keep track of what everyone is doing but there are different maps that allow for some decent scalability. The base game comes with 2 maps.

I think it is a bit more difficult to keep track at 4-5 but I have found that makes everything feel a little more organic, there are so many forces beyond your control that you kind of have to just play your game and try to thread the needle through other players rather than analyse everything they are doing. While that isn't necessarily better than having a vey tight game at 2p it does provide a different experience which I quite enjoyed.

I totally agree, I tend to play a game "shooting from the hip" rather than over analyzing a situation and burning out my brain!

I'm more of the second type when it's solo play, but definitely try to reign myself in and go for "shooting from the hip" when playing 2p with my wife :D

I agree. Solo I can process all I want/need to, but multiplayer I try and use my downtime to process and try to keep the game going!

I believe I’ve played at each player count before and I think I like 2-3 best. 4 is still really fun but super busy and intimidating haha

Good to hear! 2 would be my most common player count.

I must play this game. I have high hopes for it in terms of the "will my wife like this" criteria, aside from the boring theme and art.

Dude it’s flipping great. I probably won’t buy it myself because Neal has it, but it’s totally worth it! The strategy in this game flows really well and it is easy to understand in my opinion

Awesome! Yeah I've basically decided it will be the next "big" game that I buy.

The theme is at least Roman! That counts for something.

Haha, not for my wife 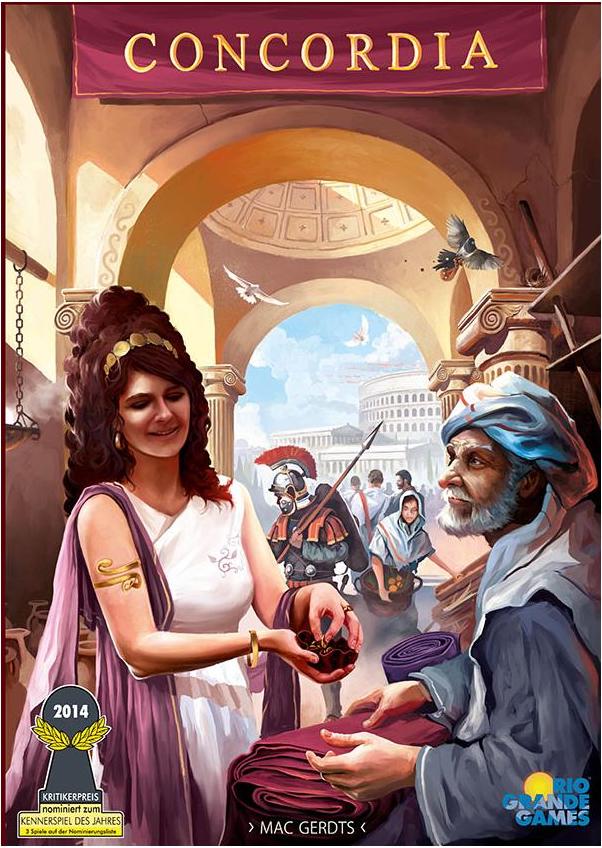