I have only played #Rising Sun out of the the three but it has one of my favourite combat systems in board games (joint only with #Cry Havoc). I love that it pushes you to abandon old territory and take new bits as you get big VPs for having 'conquered' lots of areas (to the extent at one point me and another player just agreed to swap territory for the round: he moved all his models into my area and I into his) and I really enjoy that you can go into combat wanting different things: maybe you want the territory, maybe you want to just kill off your whole army for sweet sweet victory points, maybe you are just trying to get extra coins to for a later battle. And the trying to work out what your opponent wants is so much fun, in very uneven battles, which are often less enjoyable in lots of games, it is still a real puzzle of how much to invest to ensure the outcome you want while not giving cash to your opponent.

I also enjoyed that you have very limited miniatures and movement is not easy, so you can really benefit from letting someone kill off your army so you can redeploy them more efficiently.

The only reason I have never looked to buy rising sun is that I found the miniatures unnecessarily big and not significant enough to justify it: a lot of the powers you get are much more useful. A version of this game with cubes and tokens/standees would be just fine for me.

It's been a fun experience re-visiting Rising Sun after my initial experience. I can see a lot of the fun that can be had in the game now that I got over my initial bias. But as for going to cubes and standees!? GASP!!! Say it isn't true! I get it but I personally love minis. I love them quite a bit. I love collecting and painting them and then having them crush your opponent while looking good doing it! (I am attaching a pic of some I have painted.) I honestly can't get enough of them and I think that's the perspective Cool Mini or Not comes from being that's is literally their legacy and initial customer base. But I do understand that so many games, maybe even these ones, don't need the minis. 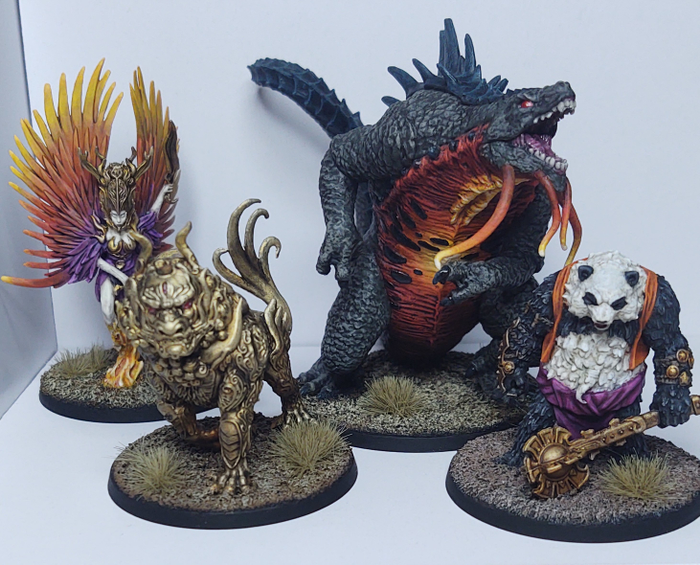 Haha, those are some gorgeous minis! You are very talented! I just found that while placing a massive mini on the board looked cool, their powers didn't seem as epic as they looked. Like the lion is just worse than one of you starting minis as it can only go on the prayer track but is enormous. And one of the fighty ones is massive but just gives you extra points for winning (or being present at, I can't remember) a battle.

But I totally accept that I am not the target consumer for such things and that for some people the minis will really make the game so much better. Which is fine and good, and I will happily play it anytime someone brings it along but just may never purchase it.