Heroes of Might and Magic III Board Game Announced 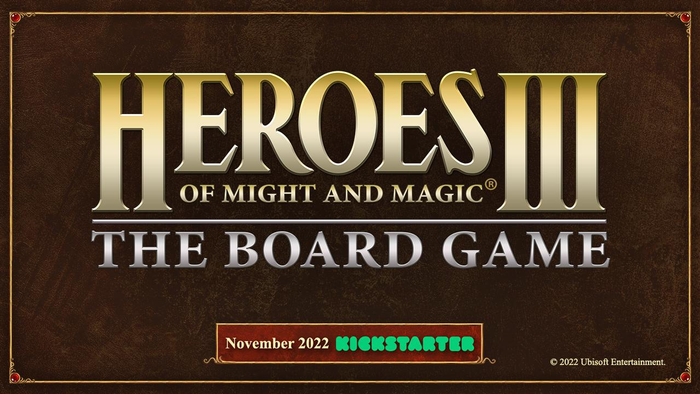 A board game based on the cult-classic video game is coming to Kickstarter in November of 2022 with a price point of the lowest tier under $99 USD. Polish publisher Acron Studio, who has most recently seen successful crowdfunding campaigns on epic games such as #Chronicle X and #LOAD: League of Ancient Defenders, is behind the release.

“In Poland, this game was one of the most iconic games we played. Basically, every kid in the late 90’s played the Heroes’ games, and we are crazy happy to turn our childhood love into a miniatures-based board game,” says Jarosław Ewertowski, CEO of Archon Studio.

“Working on this license is like being a teenager again, but this time, we are the authors, and tons of fans from all over the world are looking at us with great expectations regarding the quality,” continues Jaroslaw.

The property comes via a licensing deal with game publisher Ubisoft.

“Although 33 years old, Heroes of Might & Magic III is still the most played game in the Might & Magic series, with a very passionate and dedicated community.   We are confident that the Heroes III legacy is in very good hands with Archon Studio, not only are they one of the top specialists of miniature board games in the world, but more importantly they are authentic fans of the original game.I can’t wait to see the world of Erathia, its iconic heroes,  fantastic creatures and strategic battles come to life with superbly detailed 3D miniatures!” says Eric Damian-Vernet, Brand Director and Might & Magic IP team lead at Ubisoft .

Are you excited for this video game adaption? Will you be backing? Leave your thoughts in the comments below!

About Heroes of Might and Magic III Board Game

The core game will feature three Towns to choose from: Inferno, Castle, and a yet to be announced faction. Each Town will feature two heroes to play as, along with creatures representing each Town. The game will come with over 30 detailed miniatures, including famous heroes like, ‘Catherine Ironfist’ and  ‘Xeron’, as well as iconic creatures like Archangels, infamous Devils, and all-time classic Dragons. The gameplay will combine world-exploring that uses hexagonal map tiles and the chess-like battle system representing the classic battlefields the series is known for.

Creatures turned into miniatures
For the first time, a summoned Dragon will emerge in front of you! The game features highly detailed, tabletop-scaled models representing units from the game!

Explore the world map
You start a game knowing only what’s around your Town. What lies beyond is yet to be discovered. As you travel, you will add hexagonal tiles representing the world you travel in.

Build your army of creatures
Every Town allows you to recruit different magical beings. It’s crucial to strategically combine them into an effective army. Watch out, as your opponents will be doing the same! Artwork for creatures will be provided by Iana Vengerova, a community-loved artist.

Collect the artifacts
The world is full of enchanted (and cursed!) items awaiting to be discovered by your hero. Equip your hero with just a few of these artifacts and watch your enemies tremble in fear!

Master the magic
Four schools of magic await your hero’s thirst for knowledge. Whether you are into defensive spells like ‘Stone Skin’ or into a good old offensive spell like ‘Fireball’, every Town provides magic Guilds for your mighty hero.

Level up your hero
As the game progresses, you can learn a new skill or master existing ones. Where others see peasants, the master of necromancy sees opportunity!

I'll be keeping an eye on this one!