Root on TTS: Second Time Around 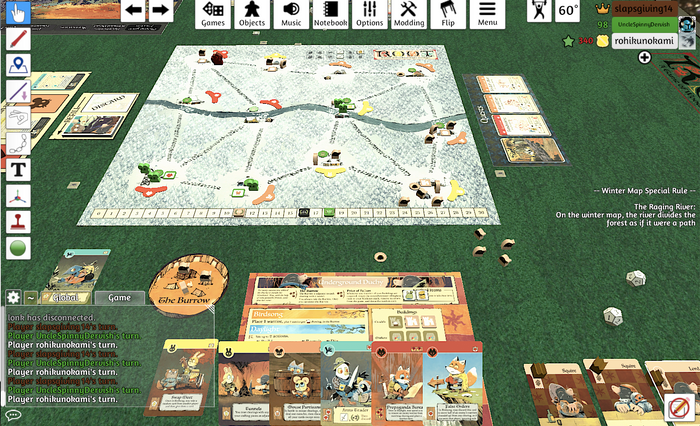 Really Happy I tried this out again.  We didn't have the best faction make up, but the Vagabond won right before my turn (which I would have won on) and two turns in front of the WA (which would have won on their next turn).

Anyway, I definitely think we should get a game together sometime for this.  It's becoming easier to manage the more I play on TTS and Tabletopia.

Finally, as I said with #Clans of Caledonia, this was so much better with everyone being able to jump into Discord and chat.

Also, I don't think I'd play again with the Vagabond on TTS if it can be helped.  Since the majority of their game takes place on their own personal player board it's very hard to see what they have going on.  It can be done but it would be really exhausting to do that.

That makes sense, I'd have a hard time trying to read the situation going back and forth between the map and your own board. Also, would you say that Clans had more to manage than Root when it comes to playing on a simulator?

I don't think I'd mind playing the Vagabond as much as I don't like to play against them.  At an actual table it's much quicker and easier to see what they have going on regarding items damaged or refreshed and how to try to interfere with their quests.  There are too many places to look to try to combat them in TTS.  There is enough to keep track of without having to track the Vagabond.

Mmmm, I'm trying to think.  The thing with Clans is you can plan out pretty well what you are going to do where Root is constantly changing based on cards crafted and battle results.  I think there is a bit more with Root because you have to often add and take pieces off the board most of the time.

Funnnn! We really need to get in on this... maybe we should just prepare an online BGA con of some sort haha. Or.... we'll worry about that later and get in some sessions of Root, Architects, and Viticulture with a few folks here.

How was your experience using TTS vs. Tabletopia?

Yeah for sure.  Maybe sometime this week?  I think TTS take a bit more getting used to but overall is better.  Some of the adjustments are due to the fact that different keys do different things on each platform.  One thing I like about TTS is you can push the magnify key and just move your mouse around and it will magnify what you move to.  Like your hand of cards, on Tabletopia you have to magnify each one at a time.

I'd be down, I just need to jump into TTS sometime and get familiar with the tools/shortcuts. Hopefully another person from here will be up for it too.

Also TTS does have a tutorial mode you should check out.  I don't think it's exhaustive but it gets you started pretty well.

Yeah, if we could get 2 - 3 of us we couldn't probably get another random player.  I haven't had any trouble starting games.  I will say a big advantages to TTS is there are a lot more players willing to jump into games.  It feels like it's hard to get random players on Tabletopia.

Glad to here you are still digging it. Who were your opponents? Were they from BGA?

That would have been really fun.  But no.  Hopefully soon.  It was just two random players.  Would have been nice to play with some people from here though.

Yes it would be cool to play with BGA users

Which mod were you using?

It was the Root with all the Expansions Mod.  They have a ton of content in that mod (including fan made factions).

Nice, I'll check it out

Yeah when I decided to buy TTS on sale for $10 I was really excited to find out the Root mod was free.

Yeah I just got it on sale too! Seems like there's a mod for almost every game, haha. So far I've only tested a couple but they seem pretty good.

It definitely takes some getting used to, but now more than ever it's a great option.  Not all the Mods are free, but many are.  I think I bought the Viticulture Mod too so hopefully we can get a BGA Viticulture in some time, amiright @philryuh?

Do we all have to have the mod to play?

You know that's a good question regarding Viticulture and I don't know the answer.  Perhaps not?  A brief look at a Steam community board says no.  We should have thought of that before.