#The Isle of Cats has been around for a bit and I (like a good cat) have generally ignored it.  Outside of the cat theme nothing really grabbed me about this game.  Time and other games went by and the pandemic led me to look at things that I might not have otherwise and I found myself watching Rodney Anderson's teach on YouTube https://www.youtube.com/watch?v=nA5S64rip4M

Honestly, what prompted me to pull the plug on this was the box lid where you can put your cat and we had just recently gotten a cat and I knew the kids would get a kick out of that.

My first surprise with this game was my daughter asking to play the same day it arrived.  Usually the kids don;t care what game I get in the mail.  My guess is she thought the cat theme looked fun.  This was also the first game that my family learned together without my playing through it a few times.  I did read the rules the night before, but other than that we worked out the kinks on the fly.

Impression #1: I didn't think it would be as fun as it was to place the cats.  This reminds me of Azul a bit but with more of a Tetris feel given the shape of the cats

Impression #2: Its hard to do what you want to do.  I've lost both of the first two games though I did better the second time.  Having a large cat family is good and scores the most points but watching those public lessons and private lessons and working toward those is key as well.  You can only capture about 2-4 cats per round and there are only 5 rounds.  I'd say an average haul is about 12 cats (sometimes you won't get the cards you want)

Impression #3: Lots of point salad with up to five cat families, treasures, and rats and empty spaces/rooms scoring takes a while

Impression #4: My daughter said its her favorite game.  We played a second game the next day.  The table and game are set up for a third game already!  This one may start competing with #Wingspan for number of plays.

Impression #4: I didn't think the card drafting would be such an important aspect of the game but it's huge.  You must draft well.  This also will lead you toward spending more fish to keep cards!

Overall I was impressed with this game and it runs smooth with 5 rounds feeling just about right and leaving you with wanting more.  Sometimes the cards can really mess up your strategy and I'd love to see a few more that give a little control over that, but I'd say that's average in general.

Awesome, it sounds like a lot of fun! Hopefully I'll get to try it this week as well! (It's on its way to me as we speak)

Also @WadeB1977 make sure you link the Weekly Challenge topic!

I googled to see what you meant about the box lid for the cat. Sharing the image I found for everyone else to see: 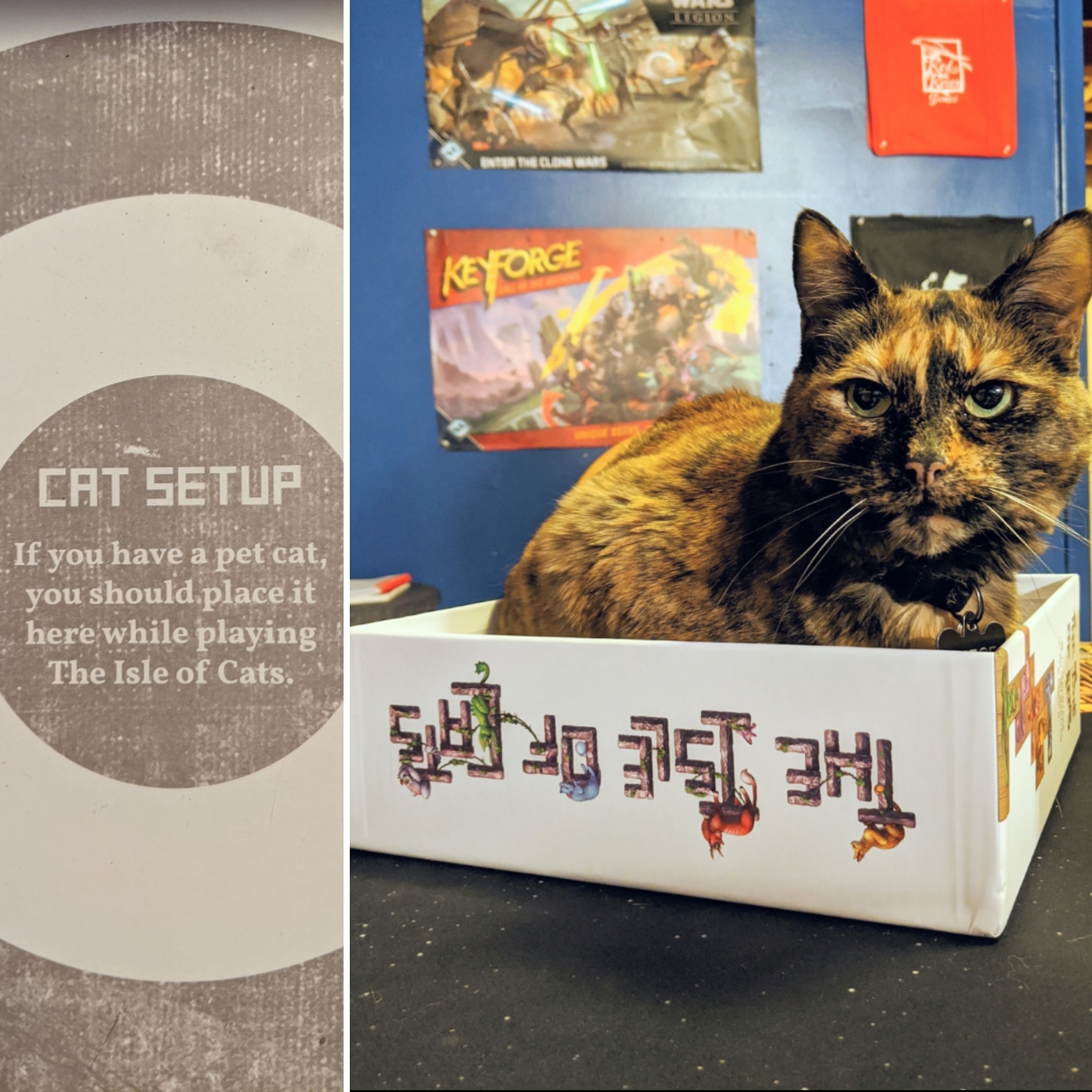 Thanks for the write up! My interest level went back and forth on this and at one point, I almost pulled the trigger but didn't go for it. I'm still very attracted to the idea of having a polyomino based game but still unsure how much my wife will like it. I guess I'll ask her tonight! (I'm on the hunt for a good family game now that we're having family board game nights with my parents every two weeks)

I think they'll enjoy the tetris-like fun but my wife and I'll probably have to explain what all the cards are for (they're not super fluent in English.) Do you think those pauses would significantly impact the flow of the game?

Our cat did not sit in the box quite so well...lol!

Ugh, looks like you experienced a bug as well. Fortunately, I had your post up on a tab to remind myself to get to it. I got Trent's help to recover the lost text. Also, if you were trying to include an image, you can send it to phil@boardgameatlas.com and I'll get that sorted out. Sorry about the trouble!!

You have definitely inspired me to look more into this. I like polyonimo games like Patchwork and Barenpark appeals to me as well, so this feels like a little step up with complexity!

I've been hearing a fair bit about this game recently, thanks for sharing your thoughts! Not sure it is one I will invest in but will be sure to play it if the opportunity arises.