Okay I need your help. My birthday is on Wednesday and Sarah has agreed to play 2 games with me the Sunday after. This is a monumental moment. I'm giving her#Concordia because we both actually like it and I'm not a completely greedy person.

For the second game, I want it to be a game she wouldn't normally agree to play with me if given the choice between it and any other game we own. Originally this was going to be#Teotihuacan: City of Gods, but I'm (hopefully) playing that with@TK2187 on BGA. So I need a good replacement. I've given some options of games she generally speaking doesn't seem to like as much as I do.

Yes sadly#Gloomhaven: Jaws of the Lion seems to be among them. She did say that would be her choice if she could vote in this poll. So I guess if you want to be nice to her vote for that lol.

Also, she's never played Underwater Cities so who knows how that would go..

I would go with w#Gloomhaven: Jaws of the Lion because it's very different mechanically and thematically from #Concordia.  You will get a good spread that way.

Thanks for the suggestion! Seems like the poll is heading that direction. And I do want to continue our campaign so it's a good choice

So much pressure now that I've been called out in front of everybody lol.  I'll go watch one now geez.

So far this poll is just as helpful as your poll was. It's an even 50/50 split. Guess that just means Sarah's playing 3 games..😅

Looks like JOTL shot out in front so she's off the hook.

I have no idea what I'm doing or what's a good move haha.  I sort of just copied you just to see what would happen.

Yeah she'll be happy as she can be anyway lol.

I found it's harder to play that on my phone. I know, excuses for when I eventually lose lol

The first time I tried to play a game on BGA was on my phone and it was nigh impossible.  I have only ever done it on tablet or computer since.  And there's no way you're going to lose this one.  I have no idea what I'm doing.

This has been a particularly bad experience. It's like not registering my clicks. And my laptop is going mind numbingly slow now a days so it's not like that's a viable option.

Also I'm working from home again this week so I'll have more time on the computer but I'm totally not going to get anything done if I keep chatting with you all day.  I'll let the emails pile up and check back in this evening.  I'll still take my turns on BGA though >.>

Hahahaha I could do that I guess to level the playing field a bit.

And no worries I've been at work all day myself. Still got another 1.5 hours left before I can go home to my last secret Santa delivery :P

Oooh what was it?

No love for the Gallerist lol.  I wonder why, its one of my friend's all time favs.

Haha it's for the best. As the heaviest game I listed, I think Sarah would ban me from using the forum if it won lol

Might have to take you up on that offer! Maybe we can play a 3 player game with @TK2187 once she knows the rules better?

Haha no worries! The more Teo the better

That would be cool!  It'd be interesting to see how this does at higher player counts.

Same. I've only played with 2 only because I picked it up just after covid. I know my friend was really interested in giving it a go and played me on BGA once. Of course now Sarah hates it so for that to ever actually happen I'd have to find another real life player lol

My friend owns a copy so I'll get to see it and the pyramid in all its real life glory one of these days.

"Real life glory." I don't know if it's necessarily glorious..but it does give it some table presence

And my friend likes his premium game components.  Check out what he did to his #Tzolk'in: The Mayan Calendar board.  So his Teo might be tricked out as well 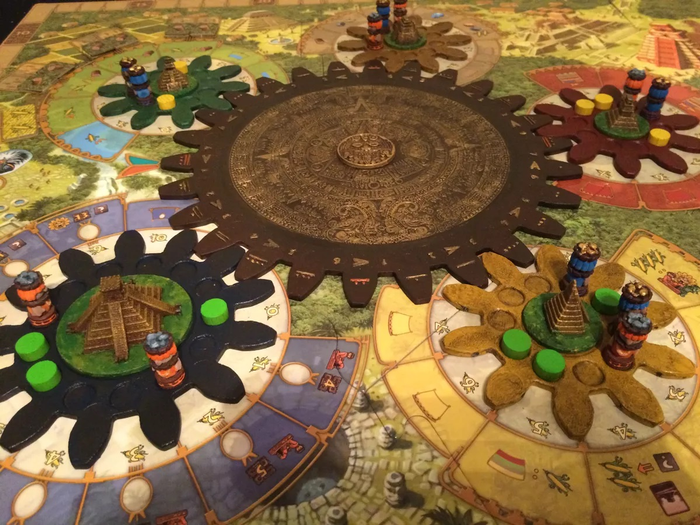 Oooh that is cool. Guess I'll have to take advantage of you not totally understanding the game before Saturday then hahaha just kidding.

I don't know how much more you can trick out those tiles but I'd love to see if if they did!

Happy Birthday-to-be! I hope both Wednesday and Sunday are both great! As always I highly recommend #13 Days: The Cuban Missile Crisis as a great 2 player game