Here's David with his giveaway win!! 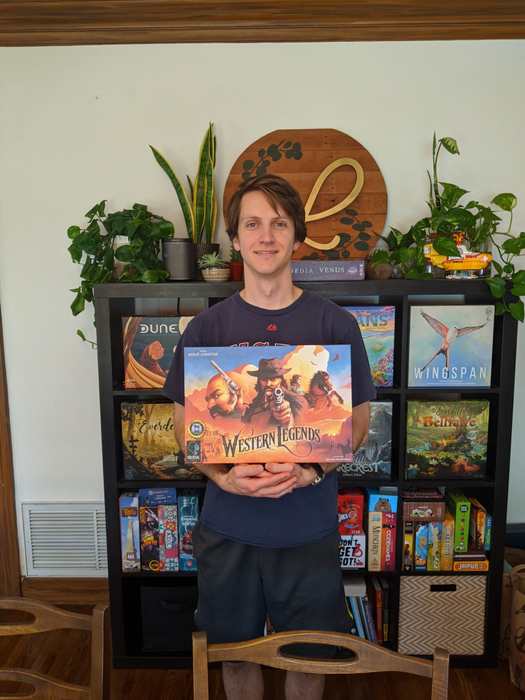 Congrats again @theDL! Thanks always for your contributions and I hope you get to try out #Western Legends with your friends tonight!

Congrats! love the #Everdell row in the Kallax too!

Haha, thanks! That was my wife's work! Unfortunately with this beast of a game, along with #Concordia Venus (Standalone) you can see over my shoulder, we've had to reorganize a little bit.

Congrats ! Nice setup and decor on the background there!

Thanks! That's my wife's handiwork, haha.

Sweet! Now to wait and hear what you think of it. I'd also love to hear your thoughts on Everdell with Spirecrest.

Spirecrest is pretty cool! It changes the game more than the other 2 expansions do. The weather cards make it tougher to do certain things, and they change throughout the game, so that makes it a little more interesting. The bonus cards ( I forget what they're called) that allow you to get special abilities, or even big critter workers, are awesome. Some of them give you a big critter with a special ability, some give you unique ways to score points, and some give you special worker location. There's also the trail thing, which allows you to grab a bunch of points at the end of the game by trading in resources and cards. It makes the game end up feeling a lot different.

I think it's a bit tougher, which is fine, but we don't necessarily want that every time we play, so sometimes we'll just play base or one of the other expansions. None of the expansions are so essential that you feel like you can't go back to the base game only, and I like that.

Wow! He got his prize super fast

Thanks! We played last night and loved it!!

Nice, tell us about it.  Who were you?  How many players?  Did you go Wanted or Marshall?  What was your favorite aspect of the play?

That's awesome!  Yeah Wanted is fun but also risky.  I love all the options.  I played poker a lot my first game (I think I had a player who did well with Poker).

I love being able to play the NPC's so there is still that player interaction even if it's indirect.  Did you like that?

Yeah it was pretty cool being able to play as a bandit or whatever against my friend in a duel, haha.

Nice, so glad you had a good time with it!

You can find all past winners of our giveaways and their selection of games here!