Cartographers: The Flip-and-Write Game that Makes Me Want to Learn how to Draw 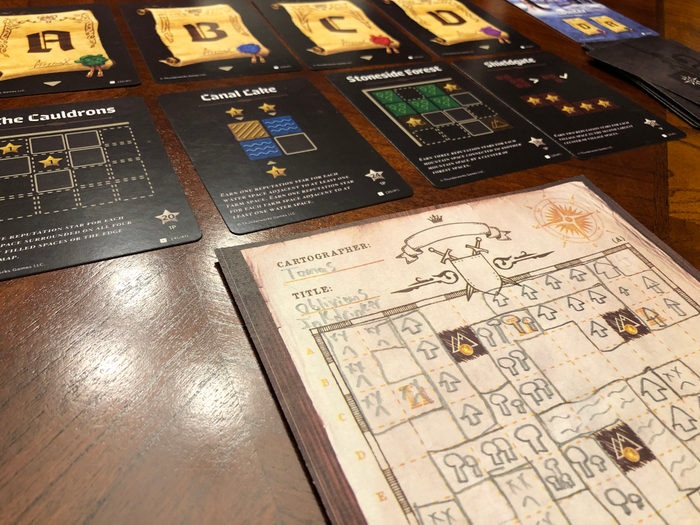 I'm no artist, but whenever I play Cartographers, I always wish I had more skill with a pencil.

By flipping cards and drawing shapes on your map, players create the world around them, mapping it out in excruciating detail. This game has the potential to create framed works of art...assuming someone else is doing the artwork.

Have any of you played Cartographers? What do you like about it? Once again, this is a solo game I really enojoy playing.

This one seems pretty neat. I like the drawing aspect as well as the monsters.

It's cool because the scoring conditions make you plan ahead, but also monsters come and mess with that plan. It's a great combination.

Still haven't tried this yet, although I'm interested. Do you think this one has a special place among other roll/flip and writes? What's been the best game for you in this category?
1
[-]

I think it's a good one because of the player interaction when the monsters come out. A lot of flip/roll and write games don't have much of that. Still, it's not much here, but at least it's something. :) I've never played any of the Roll Player titles other than this one, but I could see it filling a niche for those gamers into the Roll Player universe.

I've always enjoyed playing Cartographers, so I'd say it's *a* favorite. My wife and I are also big fans of Twice as Clever (Doppelt So Clever). If I had to pick favorites, it would be Twice as Clever, followed by Cartographers. Again, I haven't dived toooooo deep into the roll-and-write rabbit hole, but those are my picks.

I have played it solo on Tabletopia and I did have quite a bit of fun. Of course there you aren't drawing the features but placing tiles down. I pretty sure that I would have just as much fun if I were to put pencil/pen to paper. There is a lot of thought that goes into future planning so that you can try to get the best score for each season. This is one game that I might bring the colored pencils or fine tip markers to though because I do really enjoy seeing the different colors on the board when I played on Tabletopia.

I considered busting out our colored pencils for that this time, but time wasn't my ally so I went the boring route haha I do want to next time though.

I haven't played it, but the picture reminds me of Saint Malo.

I am not familiar with that one.

Have not played it, do you like it better solo or multi player? How do the monsters work in solo mode?

Honestly I’ve only played it solo haha I’ve had opportunities to play with others, but those always fell through.

The monsters have special iconography that applies only to solo mode. You basically start at one corner of the map (indicates in the monstar card) and go around your map—starting at the edge and working in—until you find a space that it fits. It works well and is still annoying as ever since you don’t actually get to pick where it goes.

I definitely agree that it works well. It is always inconvenient and usually messes up one of my plans but I do love the additional challenge it brings.

It's hard to simulate some jerk friend messing with your map when it's just you, but yes, this way works well.