@docker37 and anyone else who is playing through this game right now, I thought I'd make a space for us to compare our experiences and also document our plays.

I combined these months because I already played them and don't remember them super well so don't have much to write about them, but thoughts on next time should I make a post just for March?  Or continue to do 2 months at a time?

No spoilers. Playing with 4 people.

Game is harder than Season 1 and 2 in my opinion, but very satisfying. Wondering what the choices we make will impact the game up ahead!

I feel like there's more to think about with the teams and everything than before.

I love the team aspects and the ability to move them around to take care of problem spots.  Getting a team set up isn't much different than finding a cure previously.  A lot of it depends on though on having the cards come out in an order that is useful.

Yeah the teams aspect is really cool.  Glad its slightly easier than finding a cure since the cards are divided in thirds instead of quarters.  But thematically I really like it that we can only take out one agent and then the team can take out all of them.

Making a team is top priority as you can get overwelmed with agents quickly. It's a new dinamic and I really enjoy it also.

It is really cool.  But it can be really frustrating when you can easily build an Allied team right away but all your agents are in neutral cities haha.

Prologue: Won on first try.  This is much better than S2 when we didn't win the prologue until our 3rd attempt.  Off to an amazing start.

Jan: Won - Adaquate.  Personnel Card: Same as @TK2187 photo.  Agree, Disagree, Agree.  We were able to complete the objective of finding Agent Sabik which prevented  us with an interesting dilemmia of whether or not to tell the agency that we found him and just how much information to share with them.  As a team we all agreed the less was more in this case.  We were close on the other objective but ran out of time for the month.

Spent our 4 points of Improvements on:

Feb: Won - Adaquate.  We almost screwed up big time.  Since this was the first game where we had more event cards than the number we could play with, I set them aside for the rest of the team to select which one's to play with.  We then forgot to shuffle in the Escalation cards.  Didn't realize our mistake until the 5th turn.  Ended up shuffling the rest of them into the remaining deck as we should have but it caused the escalations to come pretty quickly after that.  While its possible we normally would have gone 5 turns without an escalation, its unlikely.

Spent all game trying to get a Soviet team assembled to deal with a massive amount of agents in Asia but never had enough Soviet cards in play at the same time to get one created.  Did get an allied and nuetral team created which helped to block two of the 3 trials in Africa.  We had the Allied team pretty early and had an opportunity to resolve with only one, but was glad we waited for the 2nd.  Had the agent problem  not been so great in Asia causing a large number of incidents we had a plan to get the 2nd nuetral team created to resolve all 3 trials, but 2 was better than 3.  Our scientiest were hanging out in Havanna, naturally enough, and it came down to a 50/50 guess between Havanna and Mexico City for the locations.  We were going to go with Mexcio City but we drew an escalation which meant we had to draw 3 cards with 5 of the 7 resulting in Incidents.  Would have survived another round if only 2 Incidents were pulled but pulled all 3 to end the month.

So let me get this straight...you tell me I should play these games without spoilers, but then you go and make a whole spoiler post about it?! Don't worry I totally won't read any of this lol

Hahaha what's wrong with me posting a million things? I thought you guys liked me? I mean@Courageous Bob just told me I was a joy to have around. Is he lying to me? 😜

Nothing's wrong!  I'm just saying without you we have nothing to talk about lol

I think this time I have competition. Of course last time I thought that too and look what happened 🤷🏻‍♂️

Gives you more chances to win! No problems with that!

Right, if I do win at any time, you should definitely get the credit haha.

And the winnings? That's how that works, right?! 😜

I knew that I was setting myself up for that lol

Of course!! I guess I own half of your copy of#Inis? Lol

That reminds me of this thing the kids at my church do.  They earn Sunday School money for good behavior, answering questions, etc.  And we have a store that we set up for them that has toys and stuff in it.  Some of the kids pooled their money to buy this big thing and then had to set up a rotation for who's house it would be at week to week.  It was pretty funny.

See?! So it works. I'll just get like weekend visitation or something :P

Lol yeah that sounds about right.  I'll let you do a few zoom calls and then we can set up a joint custody agreement.

This is awesome.  I love this idea and will write up a more detailed recap when I have time (probably this weekend).  For both my Season 1 and Season 2 I wrote a "diary" entry after each play through I printed a copy and gave to each of the guys who played and put a copy in the box.  Its fun to look back and remember certain events from the games.  I haven't started doing that with Season 0 yet but this may be the motivation I need to do it.

Regarding your question about doing a post per month - I wonder if it might be easier if we and anyone else just documents each month in this post.  Do it as a reply to your previous month, this keeps  your entire narrative in a single post.  However, that does mean that their might be spoilers for people who haven't completed a particular month yet and since I'm probably not getting to play game month March until at least 2021 it might be better to do seperate posts.

I've talked myself into doing a different montlhy post.

Our game so far is being played with the same 4 people that played through Seasons 1 and 2.

Here is our first personnel card.  I think this was from Jan. 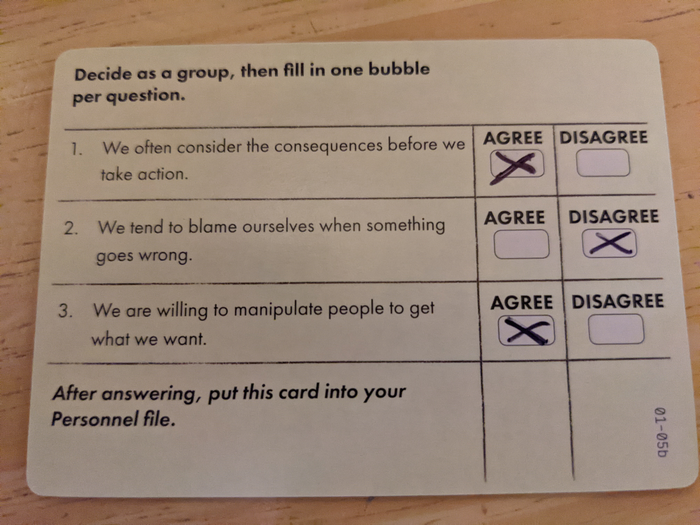 This is where it started to get exciting.  We were going about our business, just doing maintenance on the Russian agents, and attempting to create teams, when we realized that we had only 3 agents left in our stockpile and if we didn't clear 2 or more agents per turn we would lose.  At this point we had not yet completed any objectives.  For the secret cities objective in Africa, all 3 were in neutral cities and there was no way we were going to get enough cards to get out 3 neutral teams.  We had one.  Convinced that as soon as we got the next escalation card we were going to lose, we decided to just go for one of the cities to complete that objective so the game wouldn't be a total loss.  My husband was against this move, as he was convinced that it was going to be terrible if we didn't get 3/3 cities.  "When has this game ever been nice to us?" he asked.  So we just did one of the cities and turns out he was right.  So we have 2 diseased cities in Africa now.  Somehow we managed to stay just ahead of the escalation cards and managed to eek out a win.  Have several incidents though.

I think the most budget points you get is 5 per month.  Its only 1 point if you complete all objectives not 1 per completed objective.

Oooh you're right.  We've been doing it wrong.  Darn.