I was so close but I caved. 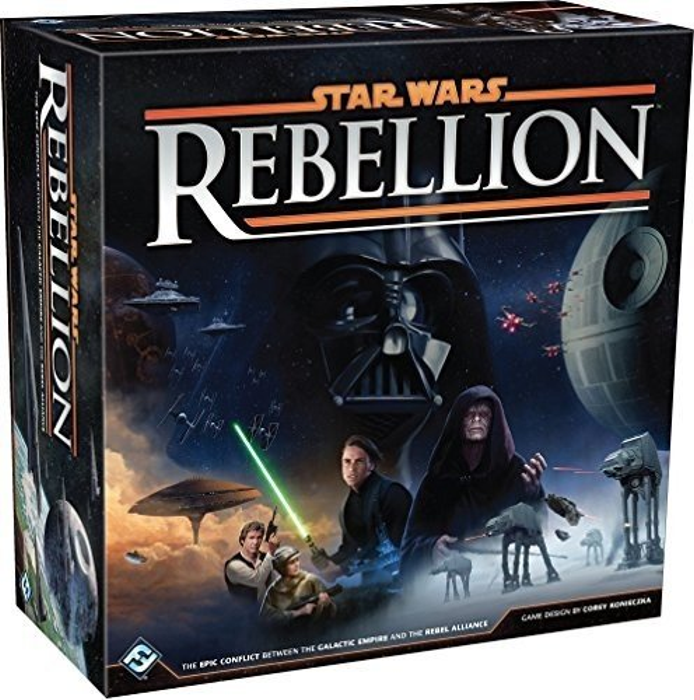 I was so close to sticking with my budget until the end of 2020. Alas, I've failed and acquired #Star Wars: Rebellion after my wife was down to give it a go in December. No idea if we'll manage to find the time, but she's willing to break it into two sessions if needed to finish. Here's hoping that our son will sleep peacefully in all of those nights and naps. And I might need more table space. Can't say that I feel sad at all about breaking my resolution though. I'm quite happy!

This actually works nicely because I've been planning to keep 2021 acquisitions either solo or "event game" focused. My wife is my primary gaming partner and we play 0-2 times a month these days so rather than getting another multiplayer game, I'd rather get more plays in on the games we have and enjoy. And every 4-6 months, it'd be nice to experience an epic game night together. I have a feeling she'll like it a lot but it'll be a matter of stamina. Our two year old is only becoming more of a handful and we're still wanting a second!

Now it's your turn. Is there a game acquisition (or future one) that came way out of left field recently?

I knew you would get excited.

Excited doesn't begin to describe the level of happiness.

You say that you caved..... But, it looks like you are counting it as a next years expense. If you are going to cave....Go all the way, LOL!!! Count it as this years expense. LOL

I'll mention two aquisitions that came out of left field for me.

#1862: Railway Mania in the Eastern Counties. This is an 18xx game, and I am a solo player. 18xx games are profoundly ugly. They have no theme. They are just not for me. Than, I started listening to some podcasts that talk a lot about 18xx, and I started seeingthe appeal of them. Then, I heard about this 18xx game which you can play solo. I looked it up on, and read a review or two.... And, then I got it. I was sorta worried about it, because I had had so little interest in the theme, or the gameplay, or the whole genre of 18xx. But, I love this. Quite frankly, it has been much better than I had even dared hope.

#High Frontier 4 All. I was strongly against the whole evolution of High Frontier, from #Rocket Flight on. I thought that they were complex for complexity's sake. I wasn't that interested in the harder parts of space exploration. But, then I did something that I should not have done. I watched the Heavy Cardboards playthrough with #High Frontier (Third Edition) components, and fourth edition rules. That put a hook into me. The #Pax Viking, Pax Renaissance & High Frontier 4 All: Module 3 was running at the time, I had already backed Pax Ren and Viking. But, after watching the teach and play, I went and added HF4 + all three current modules to my pledge. I haven't received it yet. Latest guess from Ion/Sierra Madre puts delivery in Feburary, but we will see.

I really want to give #Pax Renaissance a shot someday, but that day seems quite far away. I just bought #Pax Pamir (Second Edition) and I'm looking forward to giving it a shot!

Pamir is so so good.

Just got my first play in. Man, I loved it!

I'm glad you liked it.

All those Pax's! I wonder which one will come out on top. And no way...... have to maintain some level of discipline lol. Will see where it goes but I'm going to try my best to stick to the plan :)

I wonder as well.

I'm disappointed in you @philryuh. You were my inspiration for how not to cave to board game purchases haha. Guess this means I'll have to forge my own path.

I get pretty bad FOMO over games I know are good that end up as GameNerdz DOTD. To be honest, I haven't purchased anything totally random in awhile which I guess is good. Most of my recent acquisitions have been thanks to giveaways or my Santas. Maybe #Gloomhaven: Jaws of the Lion? It wasn't exactly on my radar until that Prime Day sale. But I'm glad I picked it up!

Hey, it's going to next year's budget! I promise! xD

After seeing #Nemo's War: Ultimate Edition Kickstarter and all of the holiday sales popping up, I'm beginning to realize/remember how tempting November and December are..

Yeah I think fortunately for me last year I wasn't as much on the in crowd as far as knowing what to look for and where to look. This year will be a different story..

#The Game: Quick & Easy and #Disney: The Haunted Mansion - Call of the Spirits Game were both spur of the moment purchases last month. They seemed like perfect games for Halloween, and ones I might get my 16 year-old son to play. D:THM-CSG might be the best game to get him to play in the future as he loves The Haunted Mansion.

#Azul: Summer Pavilion was a spur of the moment purchase last month for my wife's birthday.  She likes #Azul and I thought A:SP might be familiar enough and different enough that she'd like it.  We've played it once and I think she's ok with the differences (a bit more challenging and different point mechanics) that she'll like it long term.

#Paladins of the West Kingdom was another unexpected purchase.  I read and watched some reviews on it leading up to the Spiel de Jahres winner announcements that I put it on my wish list.  Then when I saw it on sale late this summer, I bought it for myself mainly for solo play and future game nights when we can hold those again in my area.

You have a board game buying plan?  I'm so impressed, I've never even considered that haha.  I don't know enough about what's upcoming to plan anyway, but my budget these days is "when in doubt don't buy it".  I do my very best to stick to that haha.

I was thinking the same thing. Wish I could stick to a budget hahaha. Unfortunately GameNerdz gets me almost every time. I'm getting a lot better though!

Watch out for those black friday sales!  They are wallet busters.  Or actually don't watch them.  I find that's the best strategy haha

I wish I had your willpower lol. I still look at GameNerdz DOTDs despite telling myself I don't want to buy anything until after my secret Santa exchanges have run their course. So I know I'll look....I can't not look..LOL

Haha I know I have no willpower not to buy anything if I see it on sale.  So its easier for me to nip it in the bud one step earlier

The good news is I don't think there's anything I particularly want so bad where even if I saw it on a great deal I'd be all that tempted. Of course I say this now.

Lol yeah let me know how you do once we get to Jan and we're past all the sales.

Haha! Right now I'm about to go look at some Kickstarters I heard about from a pod that sounded interesting...wish me luck!

Oooh living life on the edge.  I like it lol

As a real update though, I didn't back anything yet lol. I thought #Hibachi both looked and sounded cool. The fiancée said it sounded too much like #Flick Em Up! to her. Not that I agree with that sentiment, but after watching a few videos I could see where it would be kinda boring.

The other game that interested me was #Soldiers in Postmen's Uniforms. Just wanna watch and see how it plays cause it also looks like it might get same-y.

But overall a successful day of not backing things!

Someone tagged #Aqua Garden here a while ago and I keep the tab open to look at it every once in a while to see if I want to back it.  And every time I do I go "awww fish meeples <3" and then look away quick before I do anything rash.  I have 17 more days to decide lol

Yeah I have about 11 days now to decide on mine. I'm leaning towards caving after watching a video. It's not like anything I own so that's kind of a good justification? Maybe?