I have talked quite a bit about Brass Birmingham on this site. The theme of the industrial Revolution, the economic growth, hand management and excellent components (yes please poker chips), all have made this game one of my favorites. Heck it is a top 5 game on BGG all time at this point!

I often get the urge to play this game more often than I have the opportunity to play it, so I thought I would take some time to print the Mautoma Solo mode and give it a shot! This First Impression piece will be mostly on the functionality of the solo mode.

The first time I saw the cards for this, my brain started to turn to mush. The iconography on these are far from intuitive. As I was studying the rulebook, the actions and thought process was fairly clear, however the process is not very intuitive. As I jumped into the game, I had to reference the rules basically every turn (this was also my fault for not studying more). The more I played though, the more I was able to get into a rhythm.

As the human player, I will always have the first turn playing against Mautoma, which is fine, but it does take away some conflict in standard Brass as you jockey for player order positions. When it is the Mautoma’s turn, you flip a card and you essentially have to go through a decision tree until a card has an action that can be fulfilled, if that action does the required two actions (which oftentimes it does with a combination move) their turn is done. If they still have to do a second action, you reference the revealed back of the next card in the deck for what type of action you need to fulfill. Again, going through a decision tree and if no action can be taken, it passes and gains 5 points. I think with another play, I can become fairly adept at this.

I played on the easy difficulty this time around. From my experience with other games, automas can be fairly hard (I am looking at you Gaia Project) but the easy mode was definitely easy. The way the game scales is it takes different industry tiles off of the Mautoma’s board allowing it to put out higher levels sooner. I am not sure how this will scale, but I think it will make it more competitive, HOWEVER the nature of the cards that dictate the actions are not very competitive. There were multiple times where they wanted to take a sell action, and they had the resources needed, but they had no industry built to sell. At the end of the game they had an excess of beer on the board (this is needed to sell industries) that would have made it more competitive.

The biggest way that it got in my way was making my actions more expensive by consuming all the coal and iron like nobodies business, but that was something I could manage.

I had a good time with this to be honest. It is far from perfect, and the functionality is clunky, but I think it scratches the itch. This was the goal of checking this out! I will try and get another play with this in here in the coming weeks to see if playing a higher difficulty will change anything or to see if I missed any rules! In the end, I wasted no money on this, just time by cutting out the cards. I consider this a win.

PS. I had a lot of trouble posting photos, so I included them in the comments! 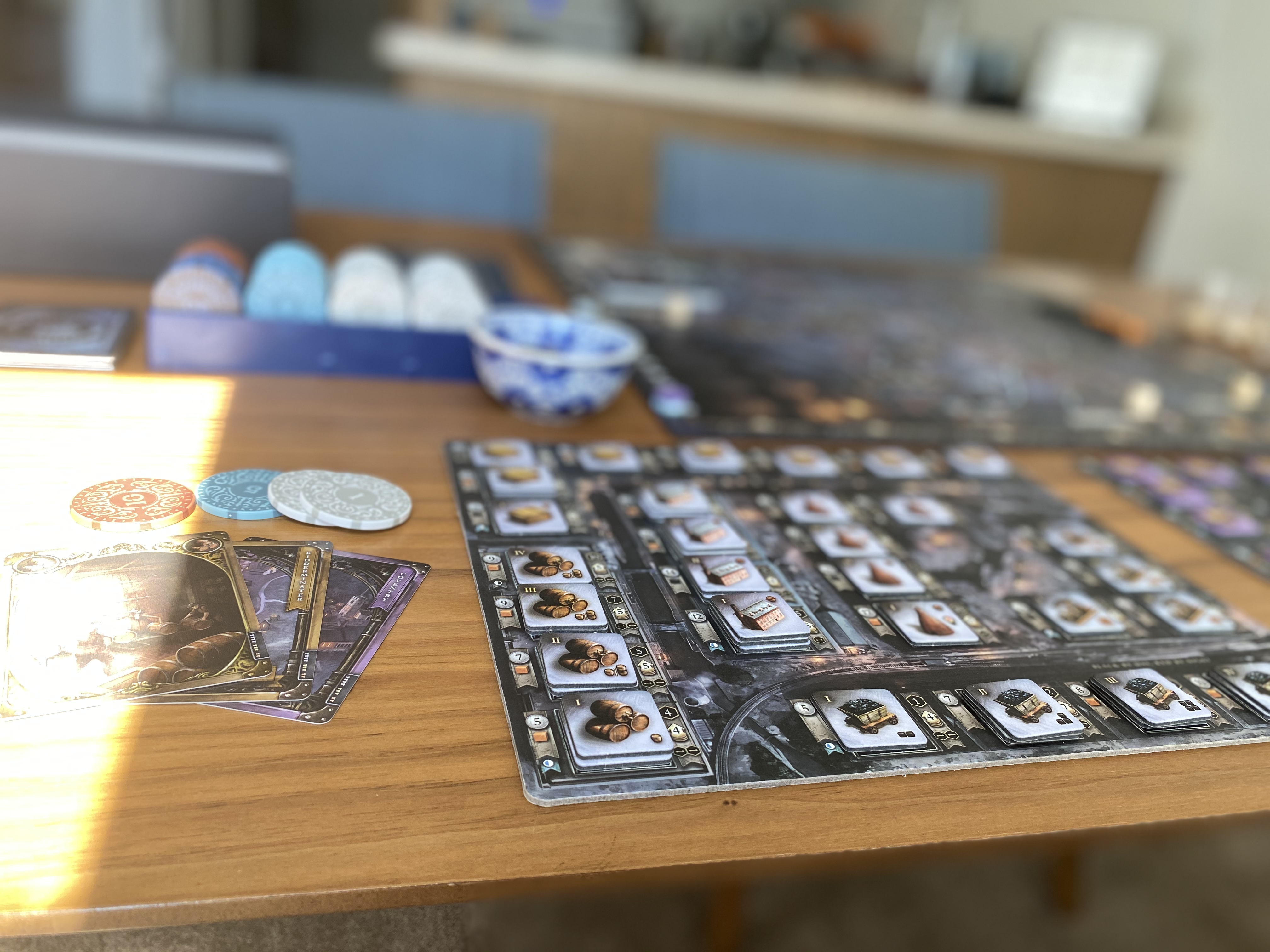 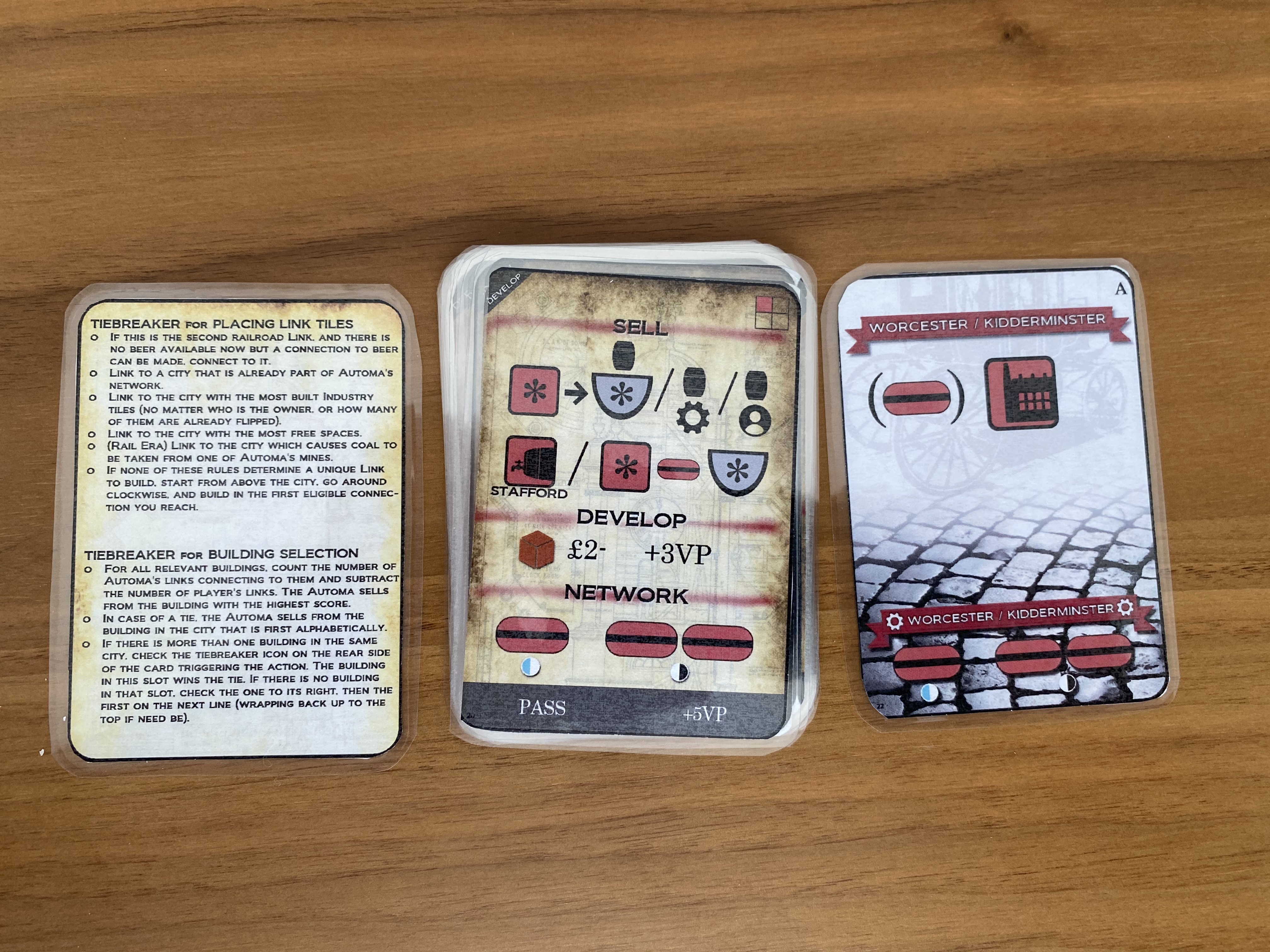 That is some pretty dense iconography!

Ya...and I honestly rarely reference it too. I just read the rules to clarify.

Makes sense, look forward to hearing an update when you've had chance to try it on harder difficulties.

I will hopefully get a play on standard difficulty soon, to see if it is more competitive and see if it sinks in the more you play!

Have you played #Brass: Lancashire?  If so did you like one more than the other?

I have not played Lancashire, I have watched a youtube playthrough when deciding which one I would want to buy and preferred Birmingham on the surface. I did not love the randomness of the foreign market in Lancashire and the ports functioned a little strangely, Birmingham seemed to be dependent on more player interaction and planning!

Interaction is a word that is music to my ears.  I've been looking at #Brass: Birmingham a bit, but I'm worried it's going to be a bit to heavy for most of my group.

It is not the most complex game in the world, but it does have some fairly abstract concepts that are core to the game. Namely your network and connection to the markets. It for sure takes a play or two to really come up with a viable strategy! What would you say are the heaviest games your group has played?

Based on BGG probably #Scythe and #Clans of Caledonia.  However, I feel like they are both weighted a bit high (but maybe not).

If they can play Clans, you probably could get them into Brass. I found some of Clans concepts to be odd, specifically with the settlements, so I could see Brass being a good next step if they want to go down that complexity bump route!

Cool.  Yeah the settlement scoring is the only aspect of the game I don't love.

It took me like three play throughs to really understand it! And even then I have to remind myself each play of how it functions!

I enjoy this mode quite a lot.

For those of you not wanting to take time to print and cut the cards: fullstackcardboard.com/cards/birmingham. Full disclosure, it's my site, but I don't run any ads or charge anything 🙂

That's very cool, thanks for putting it together, sadly I don't have any of the games, but if I ever do....

I remember you sending this out a little bit ago! Thanks for reminding us about this!

I keep on being tempted by this one. But, I have heard a lot o complaints about the Mautomata being a little bit TOO clunky to be satisfying.That sort of has me scared off for now.

Ok I'm kind of in the same boat Chris.

I will say it is not the ideal way to play the game. But it is also not unplayable! It scracthes the itch!

Ya, it for sure is not the most streamlined process. I felt like it was still satisfying in that I was able to build my industries and still have to worry about the Mautoma taking spaces or connections I had my eye on. It is definitely not the most inutitive though.

Gorgeous pictures right there, such a good looking game!!

Based on your descriptions, it sounds like the AI opponent (Wakhan) in #Pax Pamir (Second Edition) is quite a bit more flexible in comparison to the Mautoma (only mentioning this since you have that game coming your way.) Have you had a chance to look over the solo mode rules yet? Typically, Wakhan is either aggressively competitive in going after her objectives (when the board state is in her favor) or plays it smart and focuses on building her tableau when the timing isn't right.

By the way, how's player order position determined/competed for in standard #Brass: Birmingham? I've also wondered if it scales well for 2p but based on what I've read before, it sounds like it's still a great game at that player count.

I think Wakhan is better produced, the thought tree is much more obvious! I have watched a video of it but I am planning on watching another here soon to get pumped for October! I like that she morphs her strategy though, the Mautoma did not take advantage of enough scoring opportunities.

Player order is initially randomly determined, but each round, all of the money you spend that round gets placed on your player token and at the end of the round, you check who spent the least and they move to the top and so on. If you spend like 40 bucks in a round, you probably built some awesome stuff (or overpaid for Coal/iron) but you get kicked to the bottom of the the turn order, so you better be sure you do not have stuff you NEED to do the next turn.

I find that the game works really well at 2, you basically cut off access to portions of the map by removing cards from play. You can still build connections to them and build in the industries in the other cities with industry cards but they city cards are not in the game. It is not quite as tight of a game at 2, but still competitive.