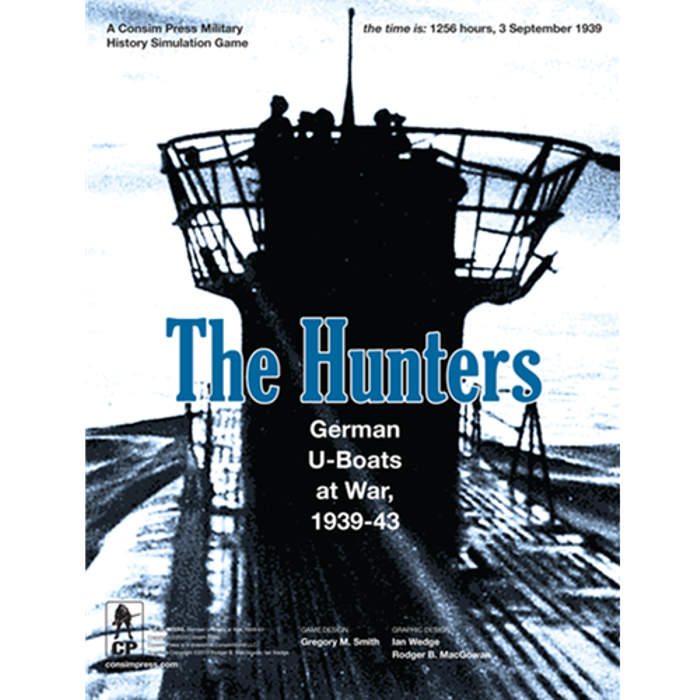 A while back I was having a conversation in a thread about historical games and several different games were brought up.  (I believe #Navajo Wars was one of them.)  This got my whistle whetted.

I started the hobby as a teenager playing war games  Games like #Rise and Decline of the Third Reich, #Axis & Allies, #shogun , and #Red Storm Rising.

However, these days I don't have the time, space, or desire to play a multi-day game that I have to keep setup and I don't really have anyone who would be interested in playing a game like that even if I was in to it.

But I do enjoy the old school games.  The ability to dive deep in to an area and really learn the history and choices needed for the time being examined is incredibly fun and rewarding.

The good news is that the grognard side of our hobby hasn't been sitting idly by during the board games rennaisance.

So after watching quite a few video and reading reviews I thought I would dive in to my first solitaire focused war game ever.   WW2 is an obvious starting point as I am very familiar with it and #The Hunters: German U-Boats at War, 1939-43 is highly recommended.  Let's see how it went!

The Hunters is in many ways a story telling game.  You start off as a lower ranked Kommandant but you can choose the date and model of submarine you start with. 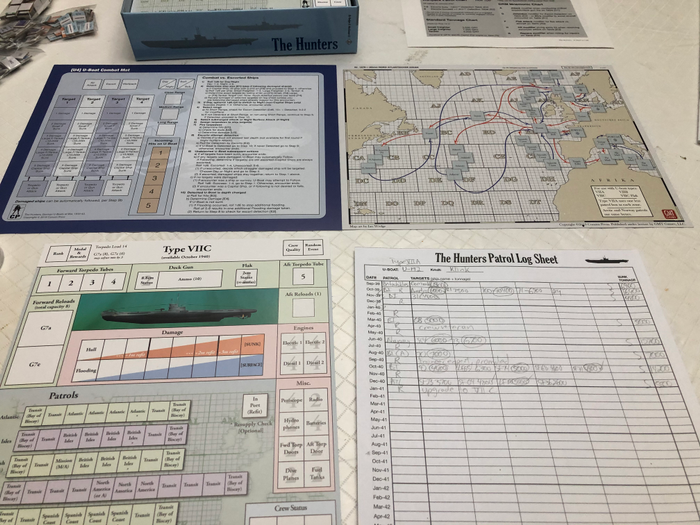 Generally speaking the player does not have a lot of control over what happens to them.  For the most part you are choosing options that will increase your chance to hit a target but decrease your chance of escaping unscathed or vice versa.  As you increase your rank you will get some options to choose where you patrol but that's it.

When it comes to gameplay I feel like the game is a bit light.  Enjoyment of this game will heavily rely on how much you are interested in this subject. 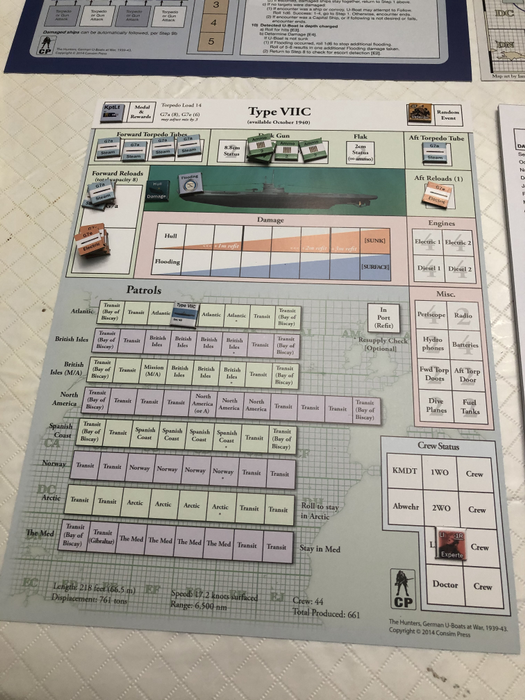 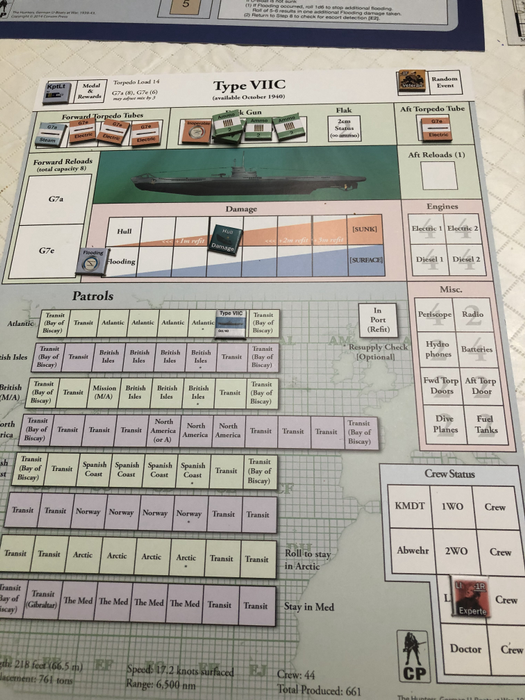 On the left you see a sub mid patrol.  It's full of torpedoes, has a veteran crew and a very experienced engineer.  On the right the sub has seen some action and been detected.  It's used most of the steam torpedoes (which are more reliable) and has taken some hull damage. 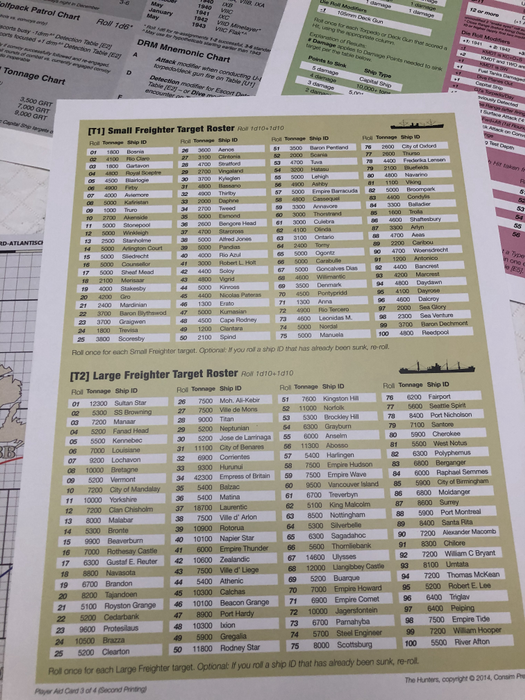 Lots and lots of charts. 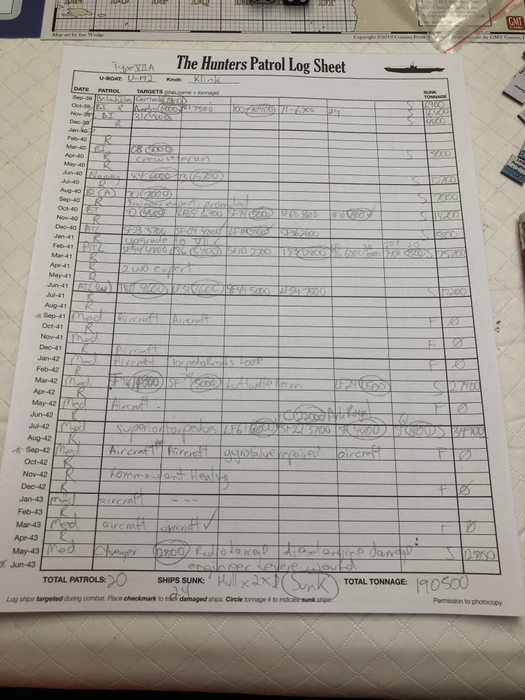 And a nice big pad of log books.  Don't worry, there are a ton of them and you can find copies online to print or excel sheets to use instead if you like.

My first run through was as Kommandant Klink who started in September 29 (right at the start) in the most basic type VII A submarine, U-192.  It has a low torpedo loadout and runs shorter patrols.

During 39 and 40 Klink and his crew ran mostly missions around the British Isles with one patrol around Norway and one in the Atlantic.  This included one special mission to drop off a german spy in Ireland which went off without a hitch. They managed to sink 12 ships of mostly smaller tonnage. The crew gelled in to a veteran outfit and the engineer came in to his own and was able to fix things that others would not be able to.  The pickings were good at this point and anti-submarine techniques and technology was pretty weak on the allies side.

In 1941 the crew was moved to the new type VII C submarine as the VII A's were determined to be outdated.  The type VII C had a longer range and a bigger torpedo loadout.  The submarine performed some atlantic convoys including one with a wolfpack before moving to the mediterranean where it would finish out the war.  Only 4 ships were sunk in the wider Atlantic and the submarine took some hits from aircraft.  The allies anti-sub warfare techniques advanced which made things a bit harder.

In 1942 the submarine ran many missions in the mediterranean with some great success including the sinking of the capital ship Ark Royal. On one particularly bad patrol the submarine came under attack from aircraft several times and was heavily damaged including a severe wound to the captain.  (If the captain is KIA or the submarine is sunk the game is over.)  This required several extra months of refit and healing before the submarine could patrol again. The second in command however got a great deal of experience during this time and became an expert. Allied techniques had improved yet again though.

In 1943 we start to see the hunters become the hunted.  Allied detection techniques have improved significantly.  On the third patrol of 43 (June 43 is the last month in the game so this was the last patrol) the submarine managed to sink another capital ship the Avenger.  However, the escorts detected them.  The periscope and deck guns were damaged the hull was damaged.  The radio went down and one of the diesel engines as well.  Crew was getting severely wounded including the expert engineer.  In a desperation move the Kommandant attempted a deeper dive than normal but the depth charges still found the submarine and it was sunk with all hands on board.

The Kommandant was posthumously awarded the Knights cross with oak leaves and was lauded as an excellent example of a kommandant who had served his country well with his career being a substantial victory. 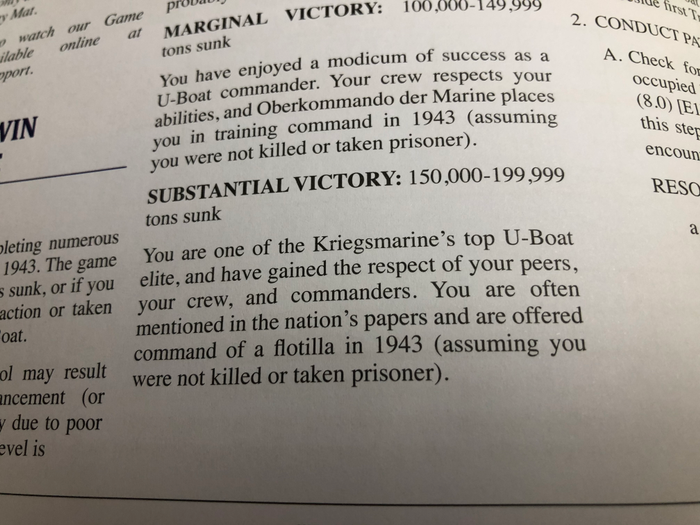 My first career run through took 3 sessions and approximately 5 hours of time.  A lot of that first session was learning and by the end I was whipping through patrols in no time.

However, I often found myself almost hoping I didn't hit a convoy because I was getting tired of the routine.  The game is very rote with very little variety once you get started.  For me personally it is missing a lot of flavour.  It needed something to go through as you patrolled.  Little anecdotes and some major story points would have kept things interesting.

Now obviously this is a well liked game by many and it's #5 on the solo list on BGG.  So I'm going to give it another chance because of that.  At this point though I don't think I can recommend this game unless you REALLY like this specific topic.  The game play itself is good but it feels like it's just bones without the flesh to go around it.

That said, I am still diving in to this genre of board games with #Cuba Libre being played with my group this weekend on TTS.  So expect more reviews to come in the future!

Kommandant Klink.....LOL Could you give him a monocle?

I was deciding between that and Schultz...

You know Hogan had a lot more fun in that particular war..... you might have had more fun as well if you would have named him Hogan......LOL

Hogan didn't ring German enough for me but my knowledge of German culture is minimal at best.  :)