Expedition to the shelf of shame: Lost Cities 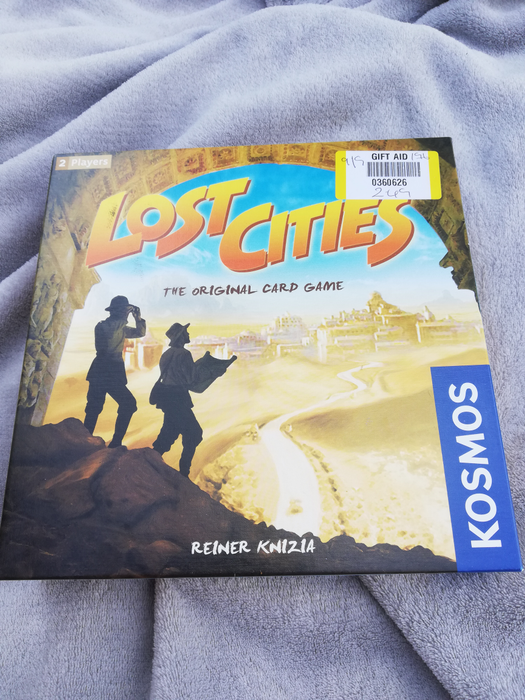 So my Partner and I are away this weekend on a little camping trip, so I thought it a good opportunity to grab some of the smaller games on my shelf of shame to have a go at.

Lost cities is a game I had often seen on lists of top 2P games. It had never grabbed me but when I found it for a couple of pounds in a charity shop (with sleeved cards no less) I figured it couldn't hurt to try. Like a lot of the small games I own, it has taken a while for it to see the light of day (thank you weekly challenge!)

Anyway, in Lost Cities, you are trying to create 'profitable' expeditions to various ancient sites. You do this by placing cards of matching colour (5 colours of card) in ascending order. Once you place the first card you are committed to that expedition, and it will cost you 20 of whatever currency you choose to name. In order to recoup those costs the sum of the cards you play must add up to at least 20, hopefully more.

On your turn you play a card (you start with 8) and then draw a card: the card you play is either to start/continue an expedition or you can play the a card to that colour's discard pile. Your can then either draw from the deck or take a card from the top of any discard pile (but so can your opponent). The discarding can be a great delaying tactic while you try to amass the right cards before embarking on an expedition but if you're not careful you'll run out of time to get them back or your opponent will grab them first (especially as often the cards you temporarily want to get rid of are the high value ones.

The cards are numbered 2-10 so it seems like it should be pretty easy. However, there are a few key limitations: first is your opponent will get half the cards throughout the game and there is only one of each card so you can never be sure if it is waiting for you in the deck or if they already have it/will draw it. Secondly, the game ends immediately whenever someone draws the last card, which can really sneak up on you.

Finally, before you place the first numbered card of an expedition you can play a 'wager card'. This will double you final net total of that expedition which can be positive or negative. This adds an extra wrinkle, as if you manage to get a bunch of cards of one colour it can be tempting to wait until you draw one or more wager cards in order to maximise your profit.

Thoughts on the game:

(+) Very straightforward ruleset, took all of 10 minutes to both read and explain the rules.

(+) Some really nice artwork on the cards

(+) Surprisingly interactive as you are keenly aware of what you opponent is doing/might want and it can be worth refusing to discard a card or grabbing something they discard for later just to block them.

(-) a fair amount of luck based on card draw, while gambling on what you might draw is part of the game. Your opponent will always have 8 cards in their hand and especially towards the end there's no reason for them to discard anything of use to you

(++) Lots of tension at the start as the game has a natural timer: you want to start getting cards down as quickly as possible but you also want to make sure you get wager cards and low cards in first/wait until you draw enough cards to guarantee a 'profitable' expedition.

(-) it takes up a lot of table space for a card game, and the box isn't small so not sure how often we will take it travelling.

(-) while there is interaction with the other player, we didn't find ourselves talking much about the game or anything else as we played, which we often do with other (even competitive) games we paly together

Overall we both really enjoyed the game, it is deeper than it first appears and I can imagine strategies emerging as you play more. However, I don't see it becoming a staple of our 2P collection or becoming a favourite travel game.

Yeah, I've seen it used in a few places and it seems like a good way to break things down. 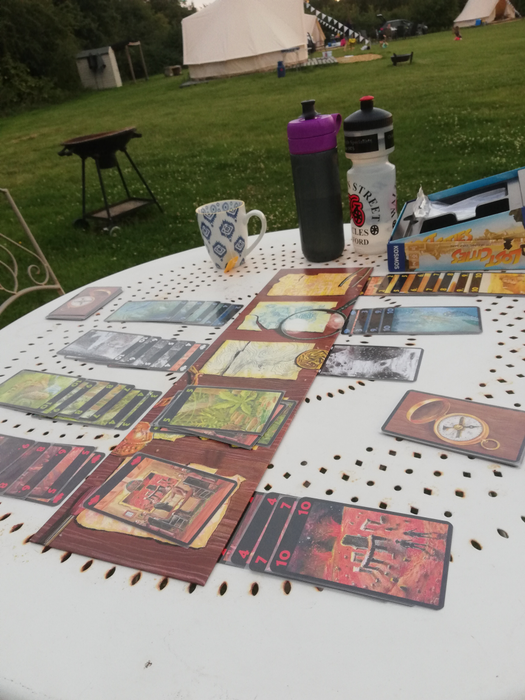 Wow, those tents in the background look super serious.

Haha, welcome to the UK, where you can never be sure of the rain even in the middle of summer: it's worth having a serious tent  😅

Looks like a nice setup for a game! I like this one. My wife isn't crazy about it... It feels too mathy to her.

Yeah, I was pleasantly surprised by it

I quite enjoy this one, but I think a big reason for that is because my wife loves it.

It is surprisingly tactical, as a lot of 2P games are, having played it a couple more times today, I think I would prefer a slightly reduced luck factor so one single game could feel more balanced as although it plays quickly, 3 games in a row might be a little much.

We usually play 3 games, and score cumulative points to determine a winner. It is quick enough, maybe 30-40 minutes. Of course, your milage may vary.