Everything Board Games Joint Statement 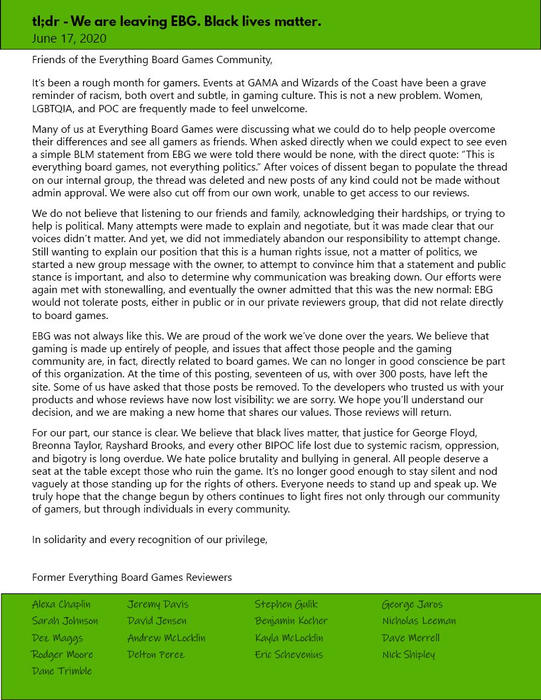 Welp, this has been coming for a little bit now, and it's finally official. I am no longer with Everything Board Games. Over a dozen of us left. It's a long story, but I'll let our joint statement do the talking.

Good statement. This stuff is important and isn’t just politics.

Admire you all for taking action as well as just voicing concerns! It's what all of us need to be doing.

It's fascinating to me how much resonance/need for action this movement has created: I don't know how long EBG has been running but presumably in it's history there have been dozens/hundreds of human's right's issues that have happened both in the USA (presumably where it is based) and across the globe: Hong Kong protests (twice), Huge incarceration/abuse of Uighurs in China, Disenfranchising/removal of citizenship rights of Muslim minority in India and Kashmir controversy, US (and my home of the UK) material support of Saudi Arabia's actions in Yemen, Israel-Palestine issues, attacks on LGBTQ+ rights in the US, Issues around incarceration of immigrants at the border, Sexism in work places and across society to name a fraction.

Again presumably (am happy to be corrected) EBG has never made statements or commented on any of these issues and has (presumably) faced limited backlash for remaining mute/neutral. Now, this is in no way a criticism of anyone for not acting when other things have happened more a wonderment and excitement that this movement seems to have had an impact in an area where such moral/human rights issues haven't touched before (namely EBG but other areas also) and that is just incredibly cool. I hope it will have long term ramifications for board gaming and wider society and not fizzle out but become the new norm that we think about this (and other issues) in all aspects of our lives.

It seems like the right decision and it's sad to hear about the stance of Everything Board Games. What's the new home that you mention in the post?

We are building a new website. We aren't sure if we'll all join the host of other sites that have offered to take us in, but we had already started making a new home for ourselves and our reviews. So we'll see. A lot is up in the air right now.

Board Game Halv Partner13 months ago

Good for you guys.

We at Board Game Halv stand with you guys. Let me know if there is anything we can do to help!

Thank you very much. I'll let you know. :) We appreciate all the support we've received from all over the industry.

It would certainly be welcome :)

I certainly wouldn't be opposed :)

You are doing the right thing, thank you for that. Can't believe the owner is making a stand on not taking a stand, I mean that statement he published...

Strange choice of hill to die on I agree, but I guess it must be important for him to go against pretty much his entire staff and seemingly not even be willing to engage with them about it or find some compromise. Sad times.
2
[-]

Always feel free to let us know if we could help in some way! It seemed like things were looking a little odd ever since the changes, and it's unfortunate it happened like this (though, to be honest, after seeing the owner's official statement in response, I feel like it's a good thing... reading through it made my jaw drop)
1
[-]

Wow, that's a tough situation. It's too bad the owner was too stubborn to acknowledge the gravity of the situation. I understand the perspective of not wanting to bring politics in, but this is an issue beyond politics, in my opinion, and it touches pretty much every industry.

We felt so too, especially since a number of those on the team have people of color in their family--spouse or kids (or both, obviously). And it is an issue in our industry and the overall community.

How many are left?

Wow, that is a pretty significant percentage leaving.