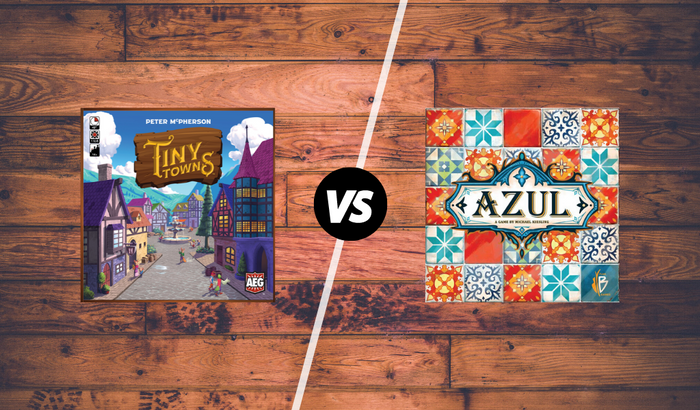 If you had a chance to play either #Tiny Towns or #Azul, which would you rather play and why? I thought it would be fun to pit two games against each other every week and see everyone's preferences.

For those who don't know much about either games, they're quite different:

#Tiny Towns is a 1-6 player game in which players simultaneously develop a unique town on a 4x4 grid. In each turn, a player will call out the color of a cube that all players must place on one of the available lots. By completing specific tetris-like shapes with the right color pattern, a player will be able to replace all of the associated cubes with the matching building type--which then frees up valuable real estate and the building will score you points at the end. Deceptively complex, this game will test your spatial awareness and either reward a zen-like gameplay or a cutthroat one depending on who you're playing with.

Speaking of cutthroat, ever heard of hate drafting? #Azul is a 2-4 player in which players are tile-laying artists who draft various colored tiles from a shared supply to decorate their walls. Grab as many tiles as possible to make the best patterns and combos, but take too much and you will pay a heavy price for any wasted tiles. Similar to Tiny Towns, Azul also invites potential for mean plays, but even more so. And the starburst-like tiles provide some of the best tactile experiences you'll find in board games.

My vote: #Tiny Towns. As a fan of Tetris, I was instantly amazed by what Tiny Towns managed to accomplish in its design. I wouldn't want to play this for multiple sessions on a single night though, because it would start to give me a headache :D

#Tiny Towns all the way. It’s more thinky, puzzly, and I love the theme way more.

I'm so burnt out on #Azul and I've shared this in a few videos but I really enjoy #Tiny Towns. It's also a big plus that you can play with more players and that there's no down time between turns ;)

I think I would go #Tiny Towns right now. I have played a lot of Azul and only one game of TT so I would want to expand my experience! So far I have preferred Azul's gameplay more but I can see the value in TT.

It's pretty close as I like them both, but I think it's Tiny Towns. It's close enough that tomorrow I might answer Azul, haha.

I think I would go with #Tiny Towns, though I haven't played it. I like #Azul, but it is just a bit simpler than I prefer.

Plus, I believe #Tiny Towns has a nice solo mode. @Skurvy5 tried it out before and I think he liked it!