Marvel Champions: The Card Game - Which character should I play as? 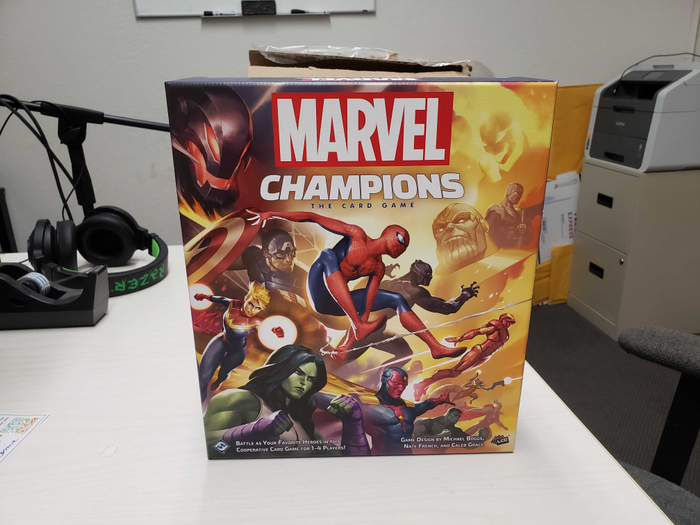 My copy of the game is finally here! I got it during Game Nerdz' big sale day. My original plan for 2021 was to wait until I have the budget for #Too Many Bones, but for lots of different reasons, that seemed unlikely. So I treated myself for a much more affordable game when it hit $25 (it's typically around $45-60). I'm a Marvel fan (fan of MCU mostly, while I was a big fan of DC cartoons) and I think I would enjoy this for both solo and co-op sessions with my wife.

I'll have to get this to the table real soon so that I can share all about it. So, which character should I play as and why? Have you thought about getting this game?

If you are playing it one handed solo then spiderman justice would be a good way to start.  But honestly you can win with any of them with different combinations of aspects.

The one thing to remember with solo is that it can be really swingy and since the margins are small it is possible to do everything right and still get trounced.  But if you can accept that you're in for a great time!  I love the playing a game, tweaking the deck, playing again loop.  Also, use the Marvel Champions Deckbuilder website for tracking and tweaking your decks.  It makes it a lot easier!

Thanks for the recommendation! Looks like a friendly website to use. By the way, what tends to be the swingy part of the experience? Is it drawing the right cards at the right time?

Reading the comments on this post is making me want to play real soon :D

I find the swingy part typically comes from the scheming.  Take Rhino for example, his main scheme succeeds if he gets 7 scheme tokens on it per player.  If he fulfills the scheme you lose.  The scheme starts with 1 scheme per player I think.

So on turn 1 perhaps you stay in your alter ego.  He puts 1 scheme on it per turn no matter what then he does his own scheme where he will add 1 - 4 more scheme on it.  So at that point you will have 3 - 6 scheme on it depending on your boost draw.

THEN you draw the encounter card and one of them says, "The villain schemes"... so it's quite possible that you just lost.

In multiplayer games those turns are bad but not game ending because his scheme will require 14, 21, or 28 tokens to fulfill so you can react to a bad turn.  In solo...you are out of luck.

Mind you, many of the villains require more than 1 scheme to be fulfilled to win.  Rhino being kind of the learner villain just has the one which is easier to teach but is hard to beat solo.

I started with Spiderman and followed the Getting Started guide. I think it is a nice warm up and getting familiar with some of the mechanics. My personal favorites though have been Black Panther and Iron Man. Super fun combos.

Nice, I saw the guide and was hoping it'll be a welcome change from my usual *read rulebook for 1-2 hours and play days later* kind of experience!

I was thinking about trying out Black Panther. Were any of the characters especially more complex to figure out? And I forget, did you end up getting any of the other packs? It's a dangerous trap I've fallen into lol

Mmmm I definitely made mistakes early on with Black Panther. I did not realize I could only use his upgrades when I play the Wakanda Forever card. I also did not realize I had to discard Captain Marvels Energy Channel after discarding the counters on the card. Definitely was overpowered until I realized my mistakes!

Having only played it once I liked Captain Marvel. I think one of the simpler characters, you slowly charge your abilities and then get to do massive damage in one go. This game didn't quite work for me after one play but I'd definitely sit down and give it another go. I imagine the deck creation aspect (we played with the pre-builds) could be fun once you got really into it.

That sounds fun, I like high risk offensive plays :)

What do you think didn't quite work out for you in your first play?

Hmm, from what I remember I felt that the challenge (villian and their scheme) felt a little too generic (do X damage before they put Y tokens down) which I understand to some extent and maybe later villians get a bit more out there. I didn't feel particularly attached to my character and their weren't many fun combos between the player characters. And finally it was a bit anti-climatic towards the end when we realised we could just win, we added up our combined max damage for that round, it was higher than the villians health so job done. Again, maybe in other games more complex manoeuvres are needed to beat the villian just before they defeat you, and so there is that tension but at least in that game I wasn't gripped.

There were plenty of positives: the personal villian/challenge for each hero, the thematic decks, solid artwork, flipping between hero and alter-ego, so like I said, am up for round two whenever I can next see the guy who owns it.

Behind the box is another box with two copies of #Red Rising from Stonemaier Games by the way. My hunch is that it won't be a type of game that my wife would especially love, so while I'll try out the game with Trent, I'll likely give the second copy away :)

Oh heck ya! I have had my eye on both of those character packs!

I have been pondering getting this game off the shelf to record several different combinations of characters.  I haven't played with She-Hulk yet but Black Panther was the most unique (I thought) of the above.