Who is a Board Game designer you really enjoy and why? 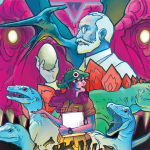 There are obvious names you hear all the time and some not so obvious but I am always interested to hear the reason why.

I am just going to say Klaus Tauber because he made something (#Catan) that changed my life and was also so against the norm at the time. I know... the Catan answer... but just to get that one out of the way.

I already anticipate (but not guaranteeing) that my one 2022 purchase will be to back Arcs.

One of my top priorities is a lot of meta game and direct player interaction and Wehrle games have always hit that for me.  Plus they always tell a great story.

You know, I haven't played more than one game from very many designers so I don't feel qualified to answer this question, but based on what I know from learning about his games, I'll say Reiner Knizia. He's a very popular designer, so that's probably not a surprising answer, but I admire the simplicity of his rulesets juxtaposed with the complex interactions between players that his games seem to have. I'd love to play more of his games, especially the meatier ones (I'm considering picking up #Babylonia at some point), but I've currently only played #Lost Cities and #Royal Visit, two great, quick card games.

Got to mention Shem Phillips. Whenever you can do two triologies where each game knocks it out of the park, while also being completely different, that is talent. I just started playing Viscounts and in awe that they have been able to done it again. I think only Pixar has this much year over year success -

Then there is all the great expansions and all his other great games...

I just played #Viscounts of the West Kingdom finally. I was initially shocked by all the praise it got thinking "how is this still able to be something new and exciting?" Well it absolutely was and I loved it. Good job to be able to keep putting out these things that are part of the same universe but feel completely different and offer their own things. It also doesn't hurt that all the art is done by THE MICO, one of the best illustrators in the board game game.

Having #The Gallerist and having played #On Mars I have to say I enjoy Vital Lacerda games.  I like the "executive actions" he uses in different games and way he interlocked mechanics and you have to pay attention to what's going on every turn to prepare for your own turn.  I've only watched playthroughs of #Lisboa , #Kanban EV , and #Vinhos Deluxe Edition but these are on my list of games I'm after to add to my collection.

Daniel Tascini is another designer whose game mechanics I enjoy. #Teotihuacan: City of Gods and #Trismegistus: The Ultimate Formula are the two games I own and I've played #Tzolk'in: The Mayan Calendar on BGA and all of them I find to be satisfying and challenging to play.

The one and only Vlaada Chvátil. He is the most versatile designer I know, able to craft wonderful deep games like #Through the Ages: A Story of Civilization or #Mage Knight, party games like #Pictomania and #Codenames, tense coop games like #Space Alert, indescribable games like #Galaxy Trucker and conventional strategy games like #Dungeon Lords and #Dungeon Petz, meanwhile being able to infuse all his games with a wonderful sense of humor that reaches even his rulebooks.

At the same time, he also publishes other designers' games through Czech Games Edition and he has an amazing eye to find gems like #Pulsar 2849,  #Alchemists,  #Tzolk'in: The Mayan Calendar or #Lost Ruins of Arnak.

Oh yea, easily one of the best and most versitile. Any designer would be lucky to have two of those in a career, but just hit after hit and always where you would least expect it. It is crazy to think that the same person that designed #Codenames designed #Mage Knight!

Peter C. Hayward of Jelly Bean Games for sure. Good variety of games, great design philosophy, and a nice guy!

Got to give it up to Richard Garfield. Anyone who can create an amazing TCG (Magic the gathering, first of its kind) and then jump over and do crazy board game stuff like #King of Tokyo, #Bunny Kingdom, upcoming #The Hunger which cool and just announced #Dungeons, Dice & Danger among all the other titles in his lineup deserves accolades for such versitility.