Escaping The Monster of Monster Highway 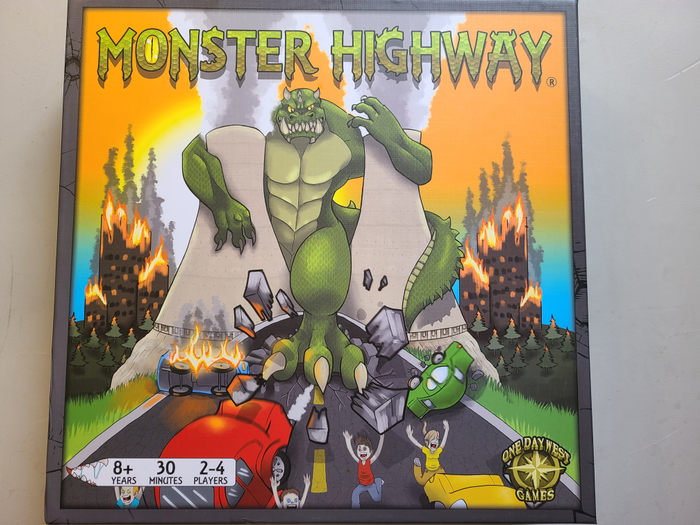 Are you a fan of monster movies? Do you love it when the evil corporation faces its comeuppance from a heavily mutated animal? Well then, we have a game for you! The King of... Oh, wait wrong game. Monster Highway while sharing a similar topic as other monster movie games is very unique and fun game in its own right. Instead of playing the hero trying to stop the monster or destroying cities as the monster, you are a bystander trying to escape the destruction and maybe stop your friends from escaping along the way.

Monster Highway is a game with a little bit of everything. The end goal is to get your car from the center of the board to your colored corner. This is accomplished by playing highway tiles, dodging the monster, and of course moving your car. The dice however are in control and determine what can be accomplished each turn. Will you escape successfully and be saved by the military or are you destined to become food for the beast? 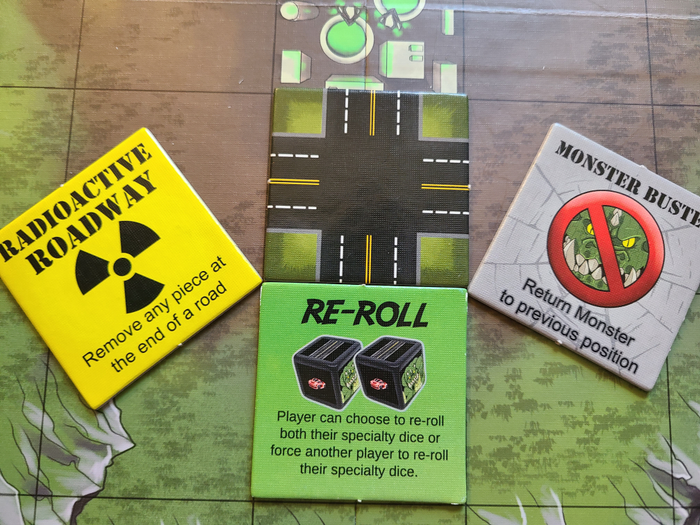 When we first opened the box, Andrew was so excited because there were so many pieces to push out. Everything seems pretty solid. The rulebook is pretty short and orderly. The first read-through didn't reveal anything, the game seems to be a solid pick up and play affair.

The first game went well. The most difficult part was finding a good way to shuffle all the tiles together. Otherwise, it was hands dealt and GAME START. 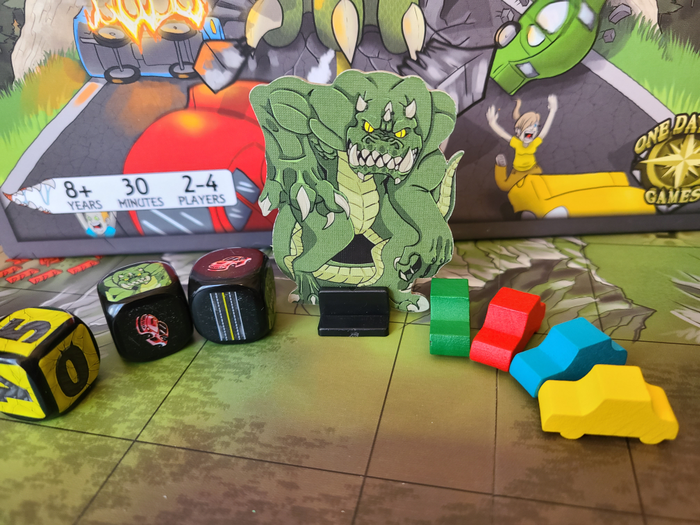 The game is played by a simple roll of the dice. Each turn a player must roll the pair of dice and the results determine what actions can be taken. Will the monster move and crush your opponents or will you get to further your own highway? It all depends on a dice roll. Each symbol on the dice represents a different aspect of the game. When the player rolls matching symbols, the effect is better than when rolling mismatched symbols (most of the time).

The monster is controlled by a deck of cards. Rolling the monster can be both detrimental or immensely helpful. Once the monster is rolled, a player draws a card that will have coordinates corresponding to the board. Rolling a double monster on the dice puts the monster in your control and you can choose which opponent to crush.

One of the dice actions allows the player to play a road tile. When these tiles are placed it allows players to advance to their ending locations. However, some tiles aren't just road tiles and instead have special abilities. Swapping road tiles, moving the monster, or rerolling the dice are some of the abilities you can draw. They help the game stay in motion and allow the lead to change frequently. Players can cause just as much destruction to their opponents without using the monster. 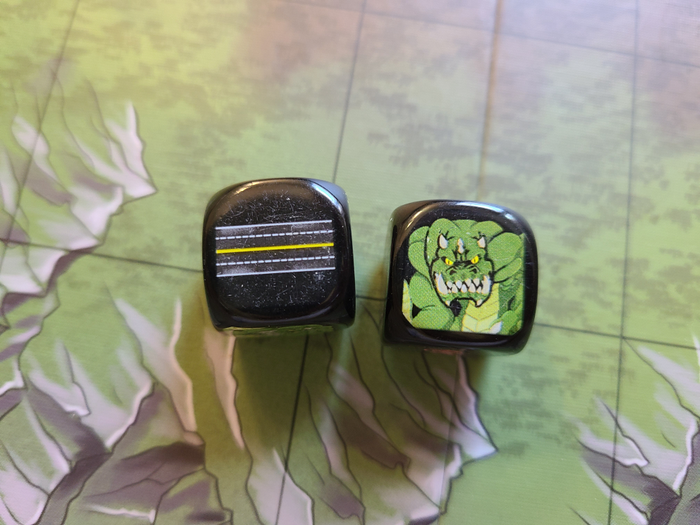 The first game went smoothly for us until we encountered a situation with swapping tiles. It left a player in an impossible to get out situation. This was quickly resolved with a look at the rules and we found out we were doing the swapping wrong (whoops). After correcting our mistake, we successfully played games with four-players and less. The gameplay doesn't seem to be affected much by the number of players. This is especially nice during quarantine as we cannot meet with our normal group and finding people to play is especially difficult. We found that the common strategy is to target the player farthest in the lead and that helped keep everyone engaged. Monster Highway was lighthearted and entertaining with friendly competition.

Andrew loves monster movies. Kayla does not. That didn't hinder our gameplay but it does matter in terms of interest. The game is very on the theme, so someone who does not like monster movies may not be as interested in this game. 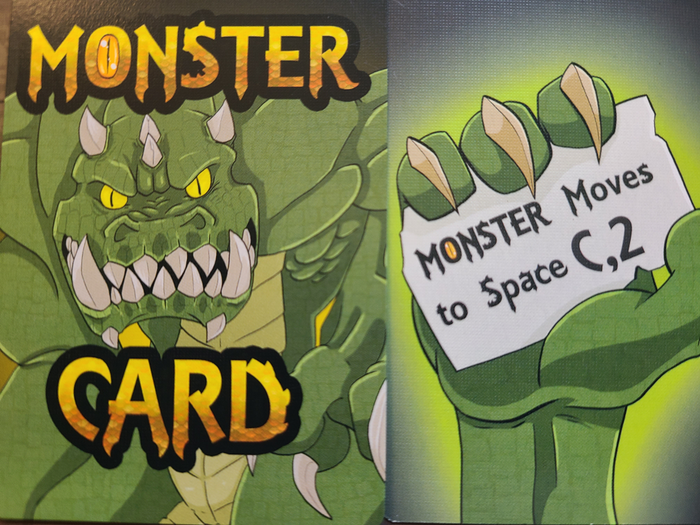 A nice cartoony style. We felt that the style does match the game and the age range it is going for.

What Stands Out To Us:

This game is great for a family with young board gamers. The gameplay is simple and easy to do but there are strategic elements in tile placement that engage the older audience. Monster Highway is simple but keeps you on edge every time you roll the dice, afraid of where the monster might move next.

Things We Think You Should Consider:

Randomness - Since the game is dice-based it doesn't matter how well you plan ahead, sometimes you just get stuck. Same with what tiles you draw.

Complexity - The game while simple on the surface has a few complex components. The roads, car, and monster have a separate list of rules that they have to follow. Same with the special tiles to be played (this is what got us confused at times).

A quick casual family game for fans of monsters, cars, and running away that engages all ages. 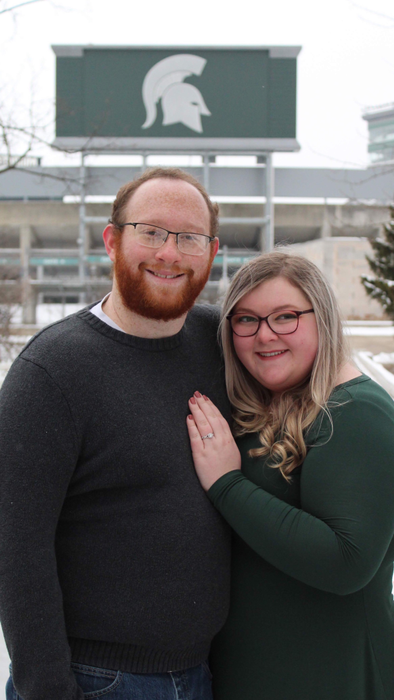 A young couple that are full-time nerds located in the state of Michigan, Andrew and Kayla, caught the board gaming bug in college and haven't looked back! They spend most of their days cooking meals, binging The Office, and playing games of all kinds. This duo will never stop sharing their love of board games with anyone who will listen (and some who won't). Andrew and Kayla have their own blog found at https://twospartanstoo.com where they review board games and post delicious recipes. You can check out their socials @TwoSpartans for Twitter, Facebook, and Instagram.