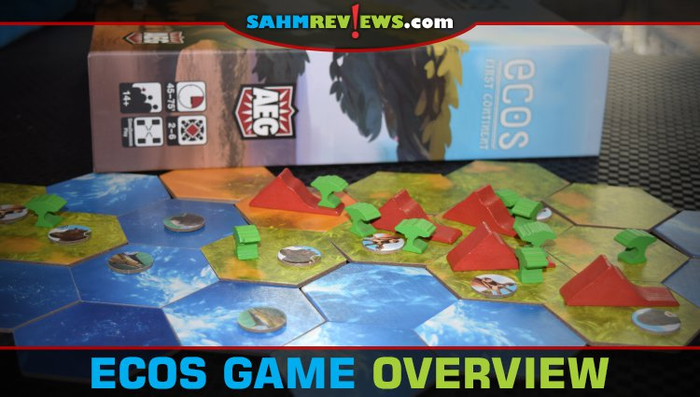 http://www.sahmreviews.com/2020/09/alderac-entertainment-group-ecos-first-continent.html
Get your engine running to efficiently develop the land and move animals around in Ecos: First Continent from Alderac Entertainment Group....

We haven't played #Ecos: First Continent for several months. It's one of those games we have to be in the mood for, partly because there can be analysis paralysis in this game with all the decisions one can possibly make.  It's a little like #Wingspan in that you can have games where nothing seems to work in your favor and your points eek along.  The difference is that Wingspan has a set number of rounds and ECOS goes until someone reaches a preselected point total.  I also think in Wingspan the luck factor tends to affect all players more equally whereas in ECOS there can be more of a dissonance with the way the tiles are drawn.

I haven't played Ecos a ton but we did play fairly recently.  My mind is sort of drawn to two ways of thinking about it.

First of all, I enjoy the game.  I have fun with it win or lose.  Mostly because I love building maps and putting the mountains, trees, and animals on it is the (almost literally) icing on the cake.

Second of all, I recognize that it definitely has some luck factor to it.

However, I also think that the luck isn't as bad as I initially thought for a few of reasons:

2) How and when you decide to activate the cards you have are also super important.

3) You MUST pay attention to other players in the game to mitigate what they are doing.

For point 1, you obviously want to draft cards that work together but you can't always get that.  So you also have to consider drafting cards that have a wide variety of types that can be covered so you don't get stuck waiting for someone to pull a rock from the bag when 6 suns come up in a row.  (Yes, I am still bitter.)  You need some cards that can be covered quickly and some that have some real power to them.  And you probably want some that allow you to impact the board state so you can mess with, and profiit from, other peoples work.  Maybe you don't get the best synergies in your cards but you can still do very well without it.

For point 2, make sure you play cards so you have a variety of resource types available to be covered, also make sure you have some simple ones that won't take a lot of cubes so you don't run out waiting to cover a couple of big moves.  Most importantly, be willing to score a good amount of points rather than working too hard to score ALL the points.

I am guilty of this one in the last game.  I was trying so hard to get a massive payday with my one use orca card.  But other players kept messing things up, often quite accidentally, and I kept going to more and more lengths to make that big payday happen.  If I had just taken a smaller payday I could have moved on to a different card iinstead and done much better.

For point 3, you have to watch out for other peoples big pay offs and mess with them a bit.  Because as you indicated, if someone gets the right cards in the right situation it's game over if no one messes them up.  So did you draft a card that allows you to eat animals even though you have no other aniimal cards?  Great!  The other players big antelope score becomes your big score.  Someone trying to get the largest chain of mountains possible?  It would be a shame of that part of the mountain range turned in to a lake wouldn't it?

Anyway, the more I've played it the more I see that luck is definitely a factor but if everyone is playing tactically and strategically it's not as bad as it initally appears.

I agree and appreciate all points noted.  Here is the run for me...

When I picked up ECOS I was thinking it would be like Wingspan in that you could just enjoy the management of one's own santuary and even if you don;t win, it was still a satisfying experience.

I feel like ECOS wants to be that kind of game but the game itself forces players to be more cut throat if the game is to be competative.  In Wingspan I feel like two players can play very differently and still the game will be close and both can have fun.  With ECOS, I feel I have to put on my strategy hat and play that way because going into it lighthearted leaves me feeling frustrated.  It feels either/or to me in a way I wish it wasn't.  I still like it, don;t get me wrong.  I just have to be in the right mood with the right group (which is harder to do and means it doesn't hit the table as much).

I'd agree with you.  I mean, you CAN play it as an easy breezy game but you are not likely to win.  For me and my group that's great.  We have a lot of euros already.  This is a bit of a different thing so it works really well for us as a change.

Yeah, I feel like it hits a sort of "in-between" place that we sometimes want and will pull out ECOS when we get into that "in-between" mood.

As a fan of engine builders and knowing my fiance enjoys bingo-like games, I would give this a try.