updated 36 hours ago | posted 9 days ago

(7/19/2021) This is an automated weekly post to talk about the games you played last week.

#Axis & Allies Anniversary Edition with my 11yo son Phil.

It took us several sessions spread over several days :D

He was Allies, I was Axis. He lost but he learned a lot while playing, making it harder on me as the game progressed.
He kept on playing, showing great character; I'm poud! :D 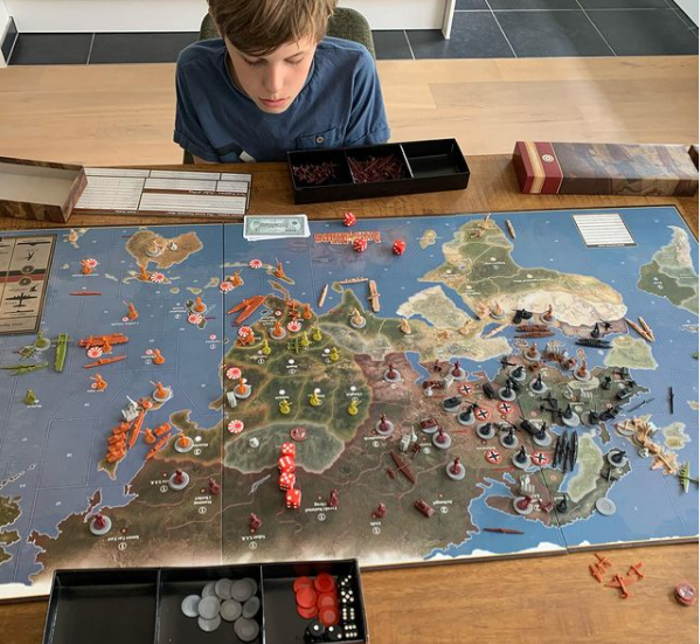 Nice!  Always fun to play with the kids no matter what the game.

While I was gone, I think I might have completely missed your first impressions of Aquatica! I remember you mentioning about buying it for a while. Your shelf must look even more beautiful these days 😆

How's the game? And I'm curious, how did your wife feel about it? (better than Concordia?)

Unfortunately I didn't do a post of any kind...I gotta start doing that again. Going back to the holiday season at the end of last year I've gotten a bunch of new games and haven't done first impressions posts for any of them :(

So far we like it! We only have 2 plays so far, though. As for the #Concordia comparisons, I can see where they come from, because the hand mechanism is exactly the same, and the decisions of when to play which cards can be key. That's as far as the comparison goes, though, I think. This game is more about setting up and executing combos and big turns, where Concordia is about resource management and expansion across a map.

I'm not sure whether or not she likes it better than Concordia. Aquatica is definitely easier to get played, because it's a much quicker game, and Concordia sometimes is more brain-burny than she's wanting.

Ooh, nice.  i love Scythe at high player counts. When we played with 7 I found it played really smooth using the "move to the next player once you select the top action" suggestion.  (We had all played at least once before.)  How did you find it worked for you?

Yeah we were able to keep a pretty good pace, often making use of that flow. For a 6 player game, we probably took about 2.5, which I was pretty happy with, especially considering we had a first time player and a 2nd time player, and the rest of us were rusty.

2.5 hours is really good!  I think we were closer to 4 but we have two really AP prone players.

Yeah! It could have pushed up closer to 3 hours, I wasn't really watching. But I was happy with our pace, regardless of the overall length.

Got to play the new #Aquatica: Cold Waters expansion at four players. Two of us loved the new mechanics, two of us said "meh." I'm in the love camp, because I genuinely enjoyed the brain burn of deciding when to turn in points for engine building or the hope of more points. Such a cool system. But admittedly, it is not a necessary expansion in my opinion unless you want to play at five players.

Oh nice! I have the expansion as well, so I'm sure I'll try it out shortly (parents got me the base + expansion for my birthday). We still haven't even tried out the Kings module for the base game yet lol

Ha!  Yeah, we generally play with the Kings as we like that quick draft at the start of the game. It really doesn't make it any more complicated to do so, so give it a whirl and let us know what you think

Sounds great! I'll definitely have to use them next time.

Not much this past week for me.

#Quantum - Played this with the meetup group last Monday. Definitely too mean for me to want to ever own it myself, but I'd give it another shot. I feel like it's really the type of game where you have to constantly attack the leader, but risk allowing someone else to sneak in and steal the win.

#Calico - Brought this to the meetup and it continues to be a hit. It falls in a weird space in terms of the weight spectrum. Really easy rules when broken down into "play a tile, draw a tile," but gets heavier when trying to wrap your head around the scoring tiles. Really enjoying playing this.

#Lost Ruins of Arnak - Gave this another shot solo, this time upping the difficulty with the AI from 0 to 2. I ended up losing, but I think it was due in large part to lackluster options available in the card rows. Definitely have to give this another go.

I'm still waiting to get Lost Ruins of Arnak to the table...

Is that because you don't want to tell your wife you bought it? LOL

That and too many options on semi- monthly game night and not enough time to play everything.

I probably just need to solo it real soon.

Yes you do haha. It plays pretty well solo in my opinion.

Just played it last night solo as two players! Made some mistakes of course, but had a great time. Looking forward to more!

Very nice! If you ever want to play it on BGA let me know and we can play!

Calico looks great in terms of being easy to teach but having difficult decisions. Is that an accurate assessment?

Absolutely. Everyone always comes away with it with the same feeling.

Awesome. I'm awaiting my delivery of #Cascadia from the same publisher, and I'm hoping for a similar thing.

A friend of mine mentioned having backed Cascadia too and I had no idea they had the same publisher lol. Totally didn't understand the reference until now so thanks for that