Hello all! I'm back after a lengthy hiatus with another of my Brian's Battery reviews, this time for my most recent Giveaway Win -#The City of Kings.

CoK is a huge Kickstarter game that I snagged on Amazon after a difficult selection process that had me picking between many different great games. Am I happy with what I picked? Let's find out! 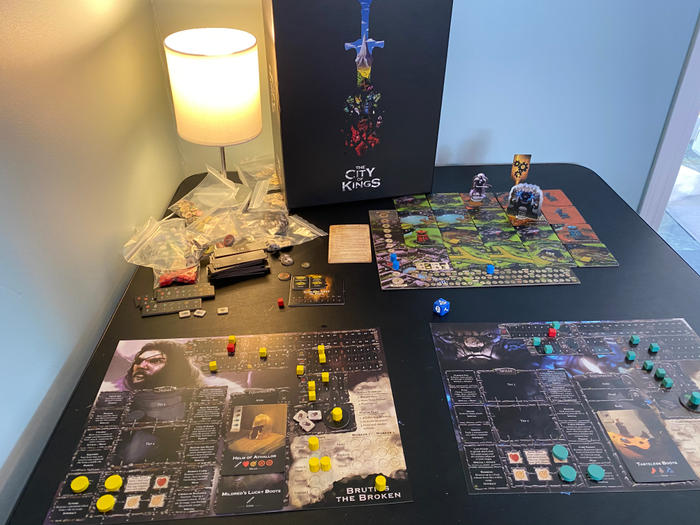 I'll start by describing how#The City of Kings plays before delving into the actual review.

CoK is a tile based adventure game where 1-4 players control heroes and workers in order to battle enemy groups, collect resources, purchase new equipment, build and upgrade structures, and accomplish the goals of the scenario. Along the way players will level up their heroes, unlocking new abilities and making their stats stronger. CoK can be played as one of 12 standalone scenarios or as part of a story campaign.

The rules of the scenario or story govern the world setup. Each setup card tells which map tiles will be needed which are then shuffled and arranged in a pattern shown on the setup card. The setup card also instructs what level the heroes start at, as well as the morale of the heroes and the hope of the City. 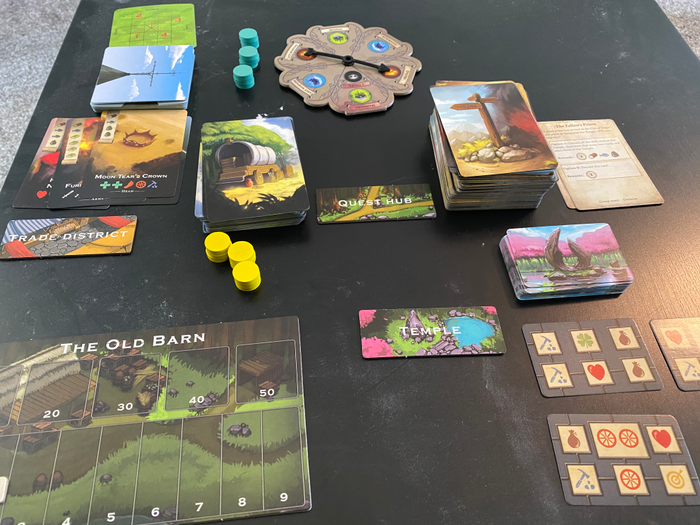 Gameplay predominantly involves an action selection mechanic. Each turn a player uses 4-5 actions to move, explore, attack, or interact  with the game world. Actions can also be used for your workers instead of your heroes.

When exploring tiles containing enemy creature groups can be revealed. Creature generation is one of the most unique aspects of CoK. Creatures in this game have random abilities and stats. 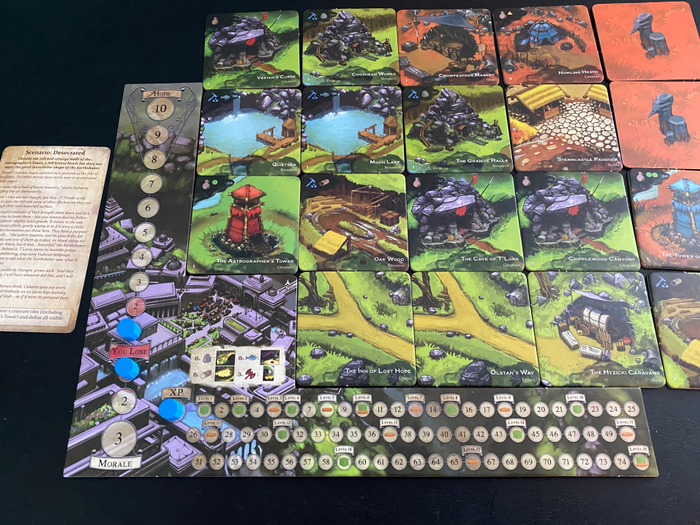 Their stats are determined by using tiles that are paired with each revealed creature. These tiles are numbered from 1-30 and increase in difficulty as the numbers increase. The scenario setup will tell you which creature tile to start with at the beginning of the scenario.

Abilities, on the other hand, are randomly drawn for each creature from 3 different groups - Easy, Medium, and Hard. The number and types of abilities drawn are determined by scenario or quest rules, the stat tile, and the newly revealed creature tile. For example, creature stat tile one shows 1 easy ability and the revealed creature tile shows no additional abilities so this creature will be created with one easy ability. Stronger creatures can have any number of hard, medium, and easy abilities.

Play for the game proceeds in rounds. Each player activates in turn order. If a player has revealed a creature that is "their" creature and it will activate before their own actions can be taken. After all players (and any creatures) have taken their turn, time advances and the next round begins. If time advances to midnight without the players completing the scenario goals, the City loses hope. If the City ever runs out of hope the players lose the game.

Players also lose the game if the heroes morale runs out.

Players win if they complete the story or scenario goals.

So that's a little bit about how the game works. Let's get into the review portion:

(+) Rulebooks in this game are solid. This game  uses the increasing popular two rule book system where one book is the "Learn to Play" book and the second is the reference rule book that is used during gameplay if needed. The books are well-written and have good examples. Not the absolute best I've ever seen but very useful and solidly produced.

(++) Component quality in this game is fantastic. It's a Kickstarter game and you can tell. The tiles, cards, and bits are fantastic quality. The included drawstring bags for the Easy, Medium, and Hard ability tokens are wonderful. I especially enjoy shaking the bags to mix the tokens before drawing out the different abilities.

And check out these ginormous character sheets: 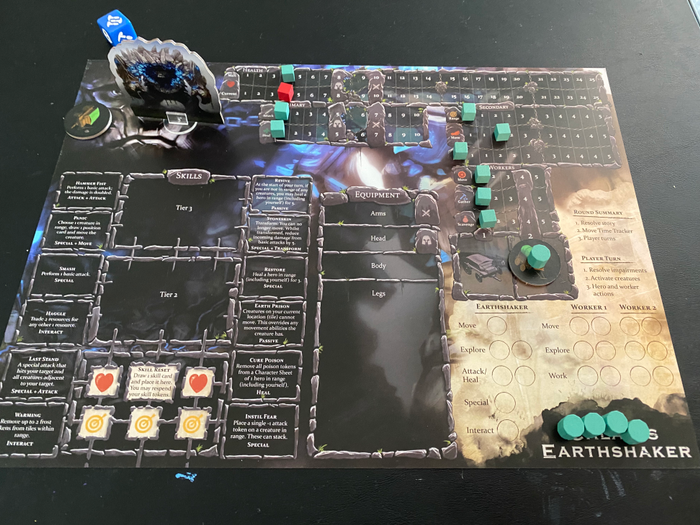 (+) The art in this game is evocative and well done. I think there is a nice use of color throughout and it mostly avoids the "generic fantasy" tropes common to games in this genre. The graphic design of the cards and the character sheets is well thought out.

(++) Gameplay is really really tight. Almost puzzle like at times. The decisions you have to make with your limited actions are agonizing. Maximizing each and every turn is critical. Each decision about what stats to increase when you level up and what skills to go for is also wonderfully tough.

(+) The lack of dice for combat is refreshing. (Although if you still want dice combat you can increase your luck skill).

(-) The use of dice for the "gather" skill is frustrating and probably my least favorite part of the game. It feels really really bad to use one of your precious actions and get nothing but a "notice" token added to the board. Of course it feels great when your single worker pulls 3 resources out of the hat too. But... yeah. Not my favorite part.

(++) There is a LOT of variety in this game. The monster ability mix and max is really cool. It's always creating new challenges for you to face. The randomized board layout is awesome. I've barely scratched the surface of this game and I can't wait to dig further in.

(++) I love the character development in this game. You have so many choices and possibilities and options. Add to that the equipment and skill cards you add. You'll never have the same character twice. So cool.

(+) I quite like that this game has standees instead of miniatures. The standees look really nice and I imagine helped to keep costs reasonable during the campaign. I am aware that you can purchase an upgrade pack with the minis and I think this a great way to give people an option if they want to spend more money.

Overall I really enjoy this game and I am very happy to have it in my collection. After I pulled the trigger I was concerned that it would occupy a space too similar to Mage Knight. Fortunately I can confirm that this is not the case. The two games might seem similar on the surface but they play radically different and scratch totally different itches. CoK definitely has a puzzle-type aspect to it as you sit and plan each turn and try to accomplish everything every turn.

I know some reviewers have offered criticism about the randomly generated enemies and how they don't really add any theme to the game. I think on one hand that's an accurate criticism - it's very thematic to fight skeletons or orcs or whatnot - but on the other the random aspect is interesting and allows you to build and expand your own stories each game.

I didn't actually comment too much on how this game feels as a solo game. I definitely think you get the full experience with this one as a solo player. The main game is cooperative so all you are missing by playing solo is other people getting in your way and slowing down your experience.  All joking aside, it's definitely a great solo game.

I am very happy I picked this game and am looking forward to many more enjoyable play sessions with this one. Thanks for reading!

Thanks, great review, good mix of objective and subjective.

I could sense the feeling and mechnics the creators want to bundle, just by reading this review; that's excellent writing.

It checks a lot of boxes of a game I'm designing/pondering on...
Fascinating to learn how they tackled some aspects so it went to the wishlist :)

Pretty awesome to learn that you are designing your own game. I hope the creative juices keep flowing for you!

Interesting game. Its one that I'd really like to try it first

The character development is really deep and interesting. I lost to the final boss in Story 1 this afternoon. It was a fun experience! Plays a lot faster than Gloomhaven.

That is a nice plus for it. Also seems easier to set up

Thanks for the detailed review! Seems like an interesting game that gives me Gloomhaven vibes only because that's probably the closest game I've played to this type. I think the character development aspect is the most appealing for me. Plus the fact it looks like it would be a whole lot more accessible to pull out and play vs a game like Gloomhaven. Glad you got to play and congrats on the win!

It's quite a bit different than Gloomhaven. I love me some Gloomhaven but this one has a totally different feel. I think overall it's still closest to Mage Knight.

Awesome! I'm glad you're digging it! It's always stressful to pick a winning game. :) After reading this, I really want to play it haha And I had never heard of this until you mentioned it! It really does look great.

Hey man, I'm so happy it worked out for you, and you finally got to get it played.

Feels good to be playing board games again!