Creating this post so that others can eventually also post their play throughs in here.  Will write about mine below.

Played May tonight and it was pretty epic!  I think we're going to remember this one for a while.

We're not 100% sure that Coop is actual dead or if he's going to turn out to be a turncoat later in the year.  This game series has made us paranoid.  We picked 5/5, 2/5, 5/5 for the questions.  Can't wait to see what sort of terrible that leads to in the future.

As far as the game play goes, we also wanted to limit the potential chase from Johnasburg so we sent the Clinic Planner to close off 1 of the two paths (and similar to @TK2187 we closed off the one closest to Cairo).  Our hospital Admin didn't start with any cards but did have 2 event cards so that was less than ideal.  We did draw the card that allowed us to remove a city from the threat discard pile so we removed 1 of the 2 disease locations that we have.  By the 2nd time around we had managed to limit the pursuit to just 2 cities and was able to form a netrual team.  However, this was at the cost of lots of agents on the board.  We ended up with 6 incidents spread across the board.  We completed the pursuit objective fairly early and then sent both teams off to do more productive things, like removing agents.  The Medical Conference Coordinator was able to create a soviet team, get it to Peking and get the Allied team to Instanbul as well as move the next player to NY since we need to be in DC in order to do the Acquire Target action.  Thus on what turned out to be my turn I was able to complete the objective to acquire targets for objective 2 and then on a 50/50 shot was able to acquire the control center in South America as well to give us the Succeeding Win for May.

We thought we were toast when the 6th incident came out on the board and we had 6 locations that had 3 agents each.  However, on the 2nd to last turn we drew the One quiet night card and that gave us the win.

We never drew a disease cube the entire game as the only disesed city got shuffled to the bottom of the deck on the first escalation and we never got back to it the rest of the game.  It was the top card on the One Quiet Night.  Our strategy of removing the disease locations ASAP is paying off.

For Bonuses we had 5 points and spent on 3 visa's and the Gumbrella.

Oh and I've made 3D printed disease cubes as shown below.  Can't wait to see them on the board. 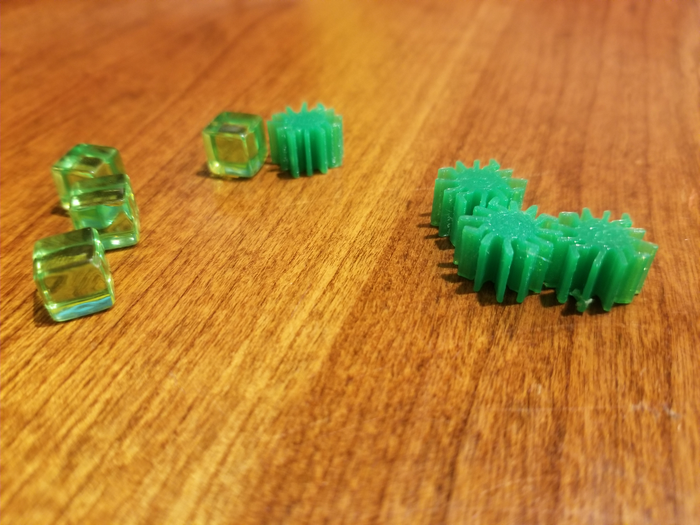 Those are super neat!  Love them.

We are also loving our Gunbrella haha

So some notes about the setup for our game:

After that, we spent 15-20 minutes discussing who should go first haha.  Our objective was to try to block off the pursuit as quickly as possible so we didn't have to chase those tokens all over the map.  So we wanted to block off Johannesburg quickly in case we got an escalation but we were also worried about the cities with 3 agents.  In the end we compromised on first blocking off the route going straight to Cairo (the nearest Soviet city) and then blocking of the other route a few turns later.  We were actually pretty lucky in this game though because we got 5 full turns in before drawing an Escalation card.  Of course that means we had some back to back ones later in the game, but the long break in the beginning let us block off Johannesburg and also get well on our way to getting a couple of teams formed.

We actually were pretty lucky this whole game. We had only 3 incidents, though one of those caused 3 of our members to lose a cover, and we managed to finish the game after only 3 Escalation cards had been drawn (though the next card in the deck was another one, we checked when we were finished).  There was one point were it was looking super bad in terms of agents on the board, but our MCC's (aka dispatcher) other alias is the one that lets you take an action token when you start your turn in a safe house so he had 4 tokens saved up and managed to do one uber turn to clear off most of the dangerous cities and move the teams to where they needed to complete the Sabik objective.  Oh speaking of that one, we chose to only file the abbreviated version of the report with the CIA, we did not tell them about Sabik's suspisions about Coop.

Forgot to take a photo of the board this time =(