Too Many Bones - First Solo Impressions 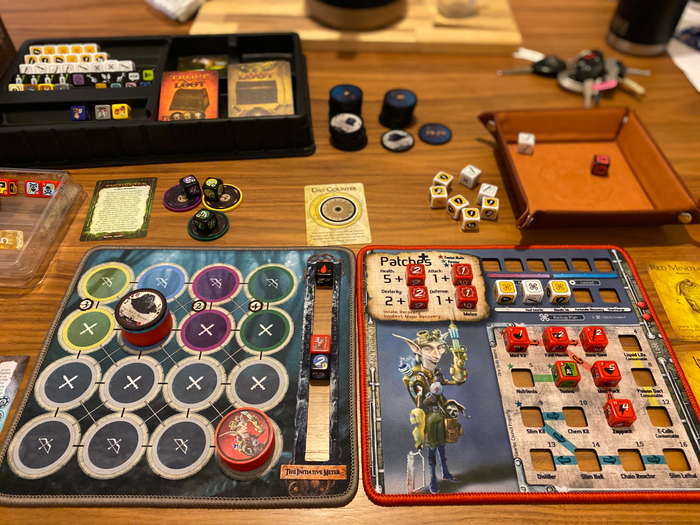 Over the last week, my wife and I moved into a new house, life has been stressful with unpacking, settling in, working still and just making sure everything is in order. Last night, after spraying the perimeter to repel all of the black widows from assassinating us, I was able to sit down and finally play a solo campaign of Too Many Bones. Let me tell you…my mind was racing after I finished.

After asking you all which Gearloc to go with there was a tie between Patches and Boomer, I decided to go with the more approachable option with Patches (healing is always helpful). I also decided to go with the shortest Tyrant campaign in Nom, a brutish Ogre like boss. The set up for this took a little longer than expected to be honest. To be fair, I still had to learn how to set up the encounter deck, but having to find the Baddie types for this specific encounter was a little tedious. Took about a minute, but nothing crazy. Everything else had a tray or easy to access space in the box and onto the table.

Once everything was set up and ready to go, your boy was ready to go. There are three different difficulty levels and I went with the middle option, starting with an additional health bump and an additional training point to get you started. I went through the first three special encounter days and set myself up with some healing dice and the Toxins die so I could poison some tougher baddies down the line, and additional dexterity to roll some more dice. Boy, I wish I had more Dex early on…

I rolled into the standard encounters (pun intended) and worked through them fairly well, not without my struggles with the scenarios and the rules, but I ended up making it to the Tyrant encounter on time! Let me tell you, this encounter is kind of hilarious. So each tyrant typically has a special die that functions totally differently than the standard ATK and DEF dice. Nom’s die has two sides, one that removes all of your defense dice in your active slots THEN the ATK damage is applied. The other side is a giant club that launches you to the farthest position possible on the board from Nom then you receive one True Damage (ignores any defense dice or other effects). I spent the first five rounds just getting punted to the corner and running up really close to him, trying to hit him, then getting launched again. It was so funny! We ended up getting to fatigue rounds where we both take a true damage at the start of the round and I was able to get some good hits in on him and take him down.

As I was tearing down the scenario, I was reading through Patches player aid and realized I totally played a specific dice COMPLETELY wrong and it has helped me out a lot when it should not have. Basically there is a die called Zappack that can either zap an enemy for 3 or 4 damage OR it can revive a party member. I did not read the fine print on this though, in order to use this I needed to get another die called E-Cells, that functions like a consumable battery for Zappack. I used this at least 2-3 times in the campaign without even having the E-Cells die! I went to sleep dreaming of what the scenario had been if I had played this correctly…

Ok, getting out of the weeds here, what are my thoughts on the game after a single solo playthrough? I love the game man. I thought I knew I would, but having played the game and been able to explore the different paths with just one Gearloc and one of the 7 or 8 tyrants really showed me how deep the game is and how it rewards multiple plays. I can tell you right now I will never make that same E-Cells mistakes again, but I want to go back as soon as possible to play that same encounter again with Patches and see if I could still do it playing it correctly! On top of that, there are another 3 Gearlocs to play and learn about! I see this game sticking around for a while with me even if I only ever play it solo. I found it very satisfying in a tactile sense (excellent components), tactical sense (really fun battles and puzzles), and fun moments (getting flung across the battle mat constantly).

I know this game will not be for everyone, a good amount of rolling dice, some finnicky rules, and a high entry point in terms of price, but if you have any interest at all in the game, look into it more. Learn about the depth of the game and try and determine if it is a fit, because if it is I can see this game being a staple in a lot of gamers collections…and this is after just one play through lol.

YEAHHH! I read the whole thing with a smile on my face lol. Mostly because I'm really glad it went well for you, especially considering the stress you've been going through. Sounds like the boss battles are just as brutal as I had heard too. Your take was going to be a big factor in whether I'm 100% about a future purchase or if it'll be more like 80% so... looks like this will be one of my few purchases next year :)

Has your wife commented on the massive box? I'd definitely need to expand my storage for this haha

That is what I like to hear! I definitely recommend doing a lot of homework before hand on the general rules so that you can focus on your the paths you can explore with the Gearlocs! The boss battle definitely made me realize I had underutilized my training points lolol. On top of the extra die Nom gets, he also has two abilities, one is called thick skin 3, where he ignores the first three damage dealt so you basically have to do a minimum of 4 damage to take away any health...then he has Recover 1 and he regains a health at the beginning of his turn...pretty brutal!

She said something once, but noting that was like "get that thing outta here" lol. It is a very large box but we are planning on upgrading my game storage here soon with the new place so she is hoping to hide all the games lol.

I'm so glad that you are loving it so far.

So am I lol, I had built it up a lot in my head and I am glad it has lived up to that so far!

So fun when it works out that way.

definitely, now just gotta wait for Pax Pamir to get here so I can hopefully have that live up to my expectations!

Ah dude this is awesome! Man those components look sick, too

Ya man, you pay a pretty penny for the sick components, but they are really really well done. I was admiring them every moment I could lol.