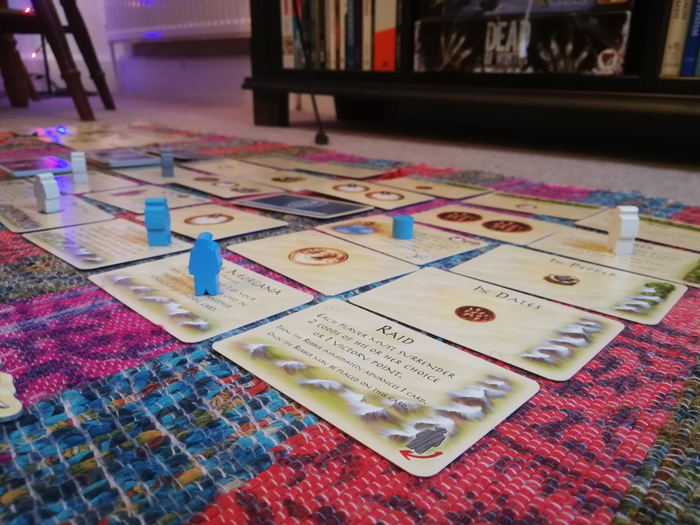 We played this afternoon and had a really enjoyable time, it ended in a bit of a runaway win at the end but most of the way through it felt like anyone's game. Here are my initial thoughts:

Learning and teaching: both very quick, I read the rules in around 10 minutes and they didn't need a second read (there are a couple of fiddly bits but the rules book is good at highlighting them and elaborating). Teaching was equally painless, the 'display' where you build this tableaux of tribe cards was probably the most difficult to explain, especially as at the start of the game there is just an empty space in front of you, no grid or anything. However, it was about 10 minutes to explain and less than 5 to set up. 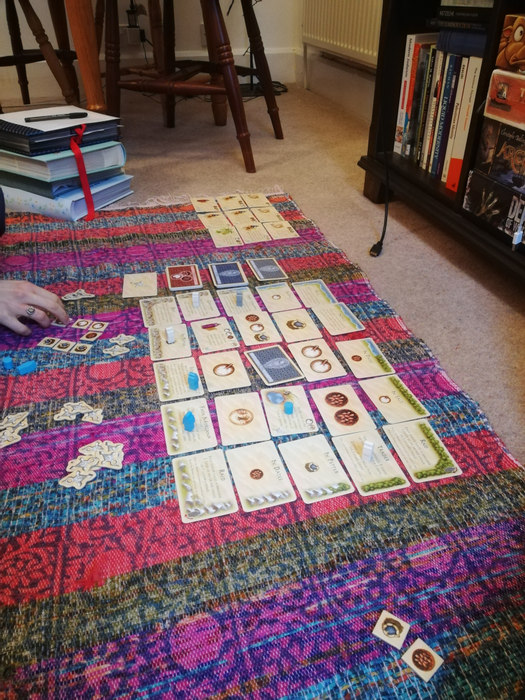 The art work and components: very solid, nothing mind-blowing by very on theme. It would have been nice if the outer ring of cards (which are permanent) could have been cardboard to differentiate them a little (the inner cards constantly change) but that is presumably keeping the cost down and it doesn't harm the game really.

Mechanics: mostly very simple and intuitive, the base mechanics are easy to understand and the tribe cards which are rules break in my and numerous enough that you only need to worry about the ones already on the board (there are enough that learning them would be mostly pointless). The way you select your actions in the middle: the cards at the intersections of the meeples you place around the edge, is clever and efficient. I've not come across something like that in a game before and it means you can rarely get everything you want and so each action, while generally quite rapid feels like a compromise.

Gameplay: So good, a lot heftier (if not heavier) than I thought it might be. This very much is a tactical game, if not much of a strategic game. We realised early on that the way you place your meeples is as much about what it will get as what you will deny your opponent, and you are rarely going to get everything (or even anything that you wanted at the start of the round. However, we almost never ended a round with one of us feeling like we had not gotten something useful, the game is very much in getting small margins over your opponent. The powers granted by the tribes cards are useful but by no means superpowerful so again it is getting a couple extra points of resources that swings the balance/game.

This is in someway my only complaint about what I think is a wonderful game: there isn't a huge feeling of progress, you aren't building an engine with the tableaux and each round is a new but familiar puzzle to solve. 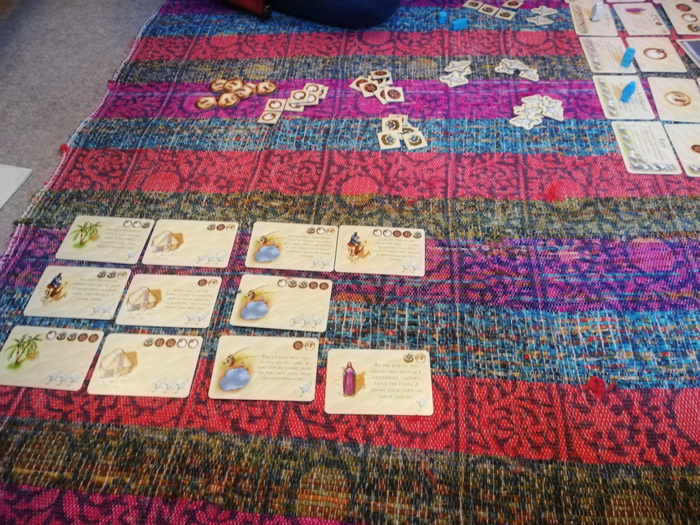 Overall however I would absolutely recommend this game, it has plenty of meat to it and it makes you think and be engaged every step of the way through. It plays quite speedily (and I am sure on repay plays will be quicker still) and remains engaging throughout.

We found this game supremely overrated, like 7 wonders duel. As for two player games that blow targi out of the water, play watergate, or Babylonia. My wife couldn't care less about the Nixon era but loves the game.

We also got #Watergate for Christmas and really enjoyed it!

In which areas do you feel #Targi failed to live up to expectations for you?

Nice review! I like this game, I've played online a few times. I just know that my wife wouldn't like it, otherwise I'd probably have bought it by now, considering its acclaim and its price. It looks good on your colorful rug! Somehow that just works, haha

Haha, indeed, it is such a good little game, very few rules but plenty of depth and choices to be made. I can totally see it not being for everyone though, it's constantly tense and your never quite sure any of your plans will work out as so much of your turn is in your opponents hands. Kind of reminds me of #Jixia Academy in that way although they are quite different games

Yep, and my wife HATED #Jixia Academy, haha. It's the strongest negative reaction I've gotten from her for a game.

This is an interesting looking game. I don't think that the designer has designed any other games, I wonder what other ideas he has in his head.

Huh, that's interesting, I know there is an expansion so the game can't have done so badly that he left the industry. So yeah would be interesting to know if he has tried to get other games published but couldn't or if he just made the one game and then moved on to different projects.

Nice post@Courageous Bob! I heard about this game on Board Game Barrage's podcast and played once on BGA with@theDL. Instantly wanted to buy the game myself.

I'm just not convinced my fiancée would like it. Generally speaking she doesn't like "mean" games and I think the blocking could be perceived as such particularly when you're trying to prevent your opponent from getting something you think they want. Sounds like you didn't find it that way so that gives me hope!

Thanks, yeah, my partner is surprisingly good at 'mean' games, we get quite brutal in #Azul sometimes 😄 I think you definitely could play it just focusing on getting what was best for you but I feel like a lot of the grit is in making that decision to limit yourself to limit your opponent even more.

Yeah we got rid of Azul here lol. Not for the meanness though shockingly. We didn't find it to me THAT mean. But I agree based only on my one play of Targi that I think you have to limit your opponent more...

It could be a good one for a lunchtime play if you had someone at work who enjoyed games?

What was it that tipped Azul off the shelf for you?

Hahaha if I had anytime at work sure. Or a lunch break...lol

We just didn't break it out enough anymore. The need for shelf space kind of took over and I've been trying to purge games we don't play as much or at all.

Already hunting for the #Targi: The Expansion

It's a great middle tier game in my opinion. Beginners quickly see the depth but can have fun. Also very hard to be a run away game, unless someone is not really paying attention to the basics.

Yeah, the depth took us by surprise, there is a lot to consider when placing your meeples, however, because there are only so many options it still moves along quickly as you can't make a huge plan.

Yeah, the scores were quite different at the end but I think that was mostly because someone finished their display before the other quite managed to get all the rows done so got a big score boost. Most of the way through it was really close

Ha, yes, we also had Tuareg music playing in the background for extra ambiance 😀 although the main reason we played on the rug is that our table is currently full of a jigsaw puzzle that is taking us a while to finish 😅

Lol well it looked good in the pictures, whatever the reason.