This morning I woke up early, so, I decided to play #Root. I played a solo game using the better bot project. This was my first ever game of Root, and I have some thoughts about it. Again, I want to stress that these are very much some of my first impressions. They are very subject to change. I will start with "Brian's battery" "review" and then share some of my general thoughts after that.

I will not really go much into gameplay specifics, or even to specific about the game itself. This is one of the most popular game on this forum, and while I am happy to try  and answer any questions you might have in regards to gameplay, I feel like many of you have a general idea of what Root is. But, for those who don't even have a general idea: Root is a highly asymetric wargame for one to four players designed by Cole Wehrle. However, the factions in this wargame are anthromorphic animals, lovingly illustrated by Kyle Ferrin.

Overall I am very pleased with the quality of the components. The physical quality of the physical components was pleasingly adequate. The cardboard is thick, without being too thick.The cards are of good quality. The wood pieces are nice and chunky. Just in terms of the physical quality, it is really solid, without blowing me away. Where this game really shines, however, is the art. The art and the graphic design on this game is superlative. The art is hugely evocative, and each card paints it's own little story. The graphic design is super clear and readable without obtruding on the game, and that is hard to do. So, top marks with for the components.

Overall I am happy with the rulebooks. They are fairly well written with a number of examples. I found it easy to look stuff up when I needed to. But, make no mistake, this seemed like one of the heavier games that I have played. Every faction has it's own rules, almost it's own game, and playing solo I had to sort know about the three factions that were in play. I can see that this thing would be an absolute nightmare to teach, and it was an amazingly hard game for me to learn.

Once again, I played using the Better Bot project that I pnp'd. I played as the Eyrie, agains the Mechanical Marquis and the Woodland Alliance. I got handily stomped, and had a good time getting my drubbing. There is a bot for each faction available. And, the bots, while lacking some of the subtlety of a human player, seem competitive, and are fairly easy to run. However, I think that Root will be a game that plays best with 3 or 4 players, so you will probably be running 2 or 3 bots if you are playing solo. There is no question in my mind that the bots are amazingly easy to run. But, that is still a lot of mental overhead, especially while running the game. Furthermore, it is a lot of time playing "someone elses" turn. This will rub some people the wrong way, it didn't bother me too much.

I like the box size and shape. I am so done with the TTR sized box for games that don't need it. The storage inside is adequate for the base game, but you wont get anything else into it. But, one thing that I have decided to start complaining about was present here. Namely the player boards and one of the rulebooks are the same size as the box. This makes them way harder than necessary to get out. I used to accept this as a means of holding components in place. I have since decided that it is the product of lazy box design. There are a lot of games that illustrate that you can store your components in such a way that it doesn't depend on the board, or the player boards, or the rulebooks, to hold the components in place in the box. Publishers, get on this, when you make your boards etc. take up all of the interior footprint of the box you make it way harder than necessary to get out.

I feel slightly confused, but generally very positive, about this game. And, am looking forward to more plays to see how it solidifies for me and to see how the different factions feel. I do think it is a tremendously rewarding mental excersise, and one that is very enjoyable. But, I also wonder if it will end up being "the tremendously rewarding mental excersise" I end up reaching for. I know this game is very different from #Spirit Island but they do feel like the operate in a similar mental area for me. And, I admit, I wonder if this might not replace Spirit Island with more plays. I did give this game 5 stars. I really think that it deserves 5 stars. I think I will really love it, but I admit that the first play was more of a promise of good things to come rather than being stellar out of the gate.

Thanks for the review @Marshwiggle92! Hope it gets even better for you the more you play

Yup, the insert sure could have used a tweak. The well for the card could have been deeper too so that the cards don't move around. I haven't tried playing against two bots yet. I still had plenty of fun going up against the Marquise since it's so aggressive in putting out so many warriors onto the board. Since I like minimal AI management, I'll probably keep to 1 AI but adjusting the difficulty/adding extra attributes as I improve. I'll eventually have to try out two AI's so that I can attempt different faction combinations

I too thought the well for the cards was too shallow.

Thanks for this insightful review!

I didn't know it was insightful, I am still trying to figure everything out about it, but, thanks.

I also value subjective reviews and your impressions add to my "aggregation". :)

How many did you play with? I played against two bots, and in retrospect, I wonder if I shouldn't have started with one.

@Marshwiggle92  truth be told I have never run them.  My buddy usually does it...I just have never grasped what the heck is going on. But he seems to have it down.  I have only played against a single bot though.

I think running 2 is easy once you are used to it.  I think I'd even feel comfortable running three now.

Nice, glad you enjoyed it.  It's definitely a fun game to play solo.  It's a different game solo than multiplayer.  I may try to bust it out solo this weekend, although I am lucky enough to have gotten a couple of multiplayer plays in recently.

I really do want to try this in person sometime.

The meta game for Root is so good.  I hope you do get to try it out sometime.  It's alright on Tabletop Simulator if you have that.  Better than never playing in person anyway...

For the month I didn't do gaming groups I played a few times on TTS and it was enjoyable.

I have so far steered clear of TTS. Maybe I do need to get it sometime.

Finca, Bus, all sorts of good things. Not to mention some KS put games on TTS to try out.

It was good for when I wasn't able to get together with people.  I don't really use it much right now but it was worth it when I was in a solo only gaming time.

Nice short review. I appreciate Root because you have a surprisingly solid solo experience and an absolutely phenomenal multiplayer experience. Truly a great one to add to a collection because it can fill multiple roles.

I do really think that it could be a good chameleon game.

Have you tried to teach this to others? I sorta dread it.

I've found the teach quite easy now that I know the game well.  Yeah, it's a bit more than some other games, but for me the best strategy is to walk through a turn or two with them after all the rules are explained, that seems to help everyone understand what others are doing for the most part.

The thing that is so clutch is the rules and turns laid out on the player boards.

Yes. I taught it to my game group last month. Wasn't nearly as bad as I was expecting. I also had them do homework and watch videos beforehand.

You mean that you, one of the solo stalwarts, got to play multiplayer???? In person???? That is great. Did the group like it? 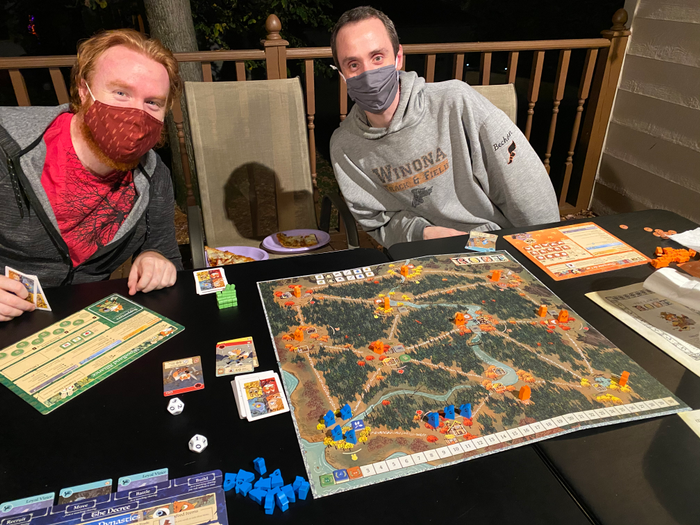