I recently picked up a copy of Flamme rouge from my FLGS when they opened in a bid to be supportive. I'm not sure I ever would have bought it otherwise, but I am now incredibly happy I did.

In Flamme rouge you take control of a pair of cyclists that you race round a track, to win Flamme Rouge you need only get one of them across the line first.

Overall it is a wonderfully simple yet surprisingly tactical racing game. it plays in 20 minutes but you can link mulitple games together in a 'tour' by only removing half of your exhaustion cards which would allow for a greater strategy (I imagine)

(I took no pictures of us playing but it is also a very pretty game and the theming is on point!)

Here's an image of the game that @Gekey uploaded at some point on the game page (okay, that does look really fun): 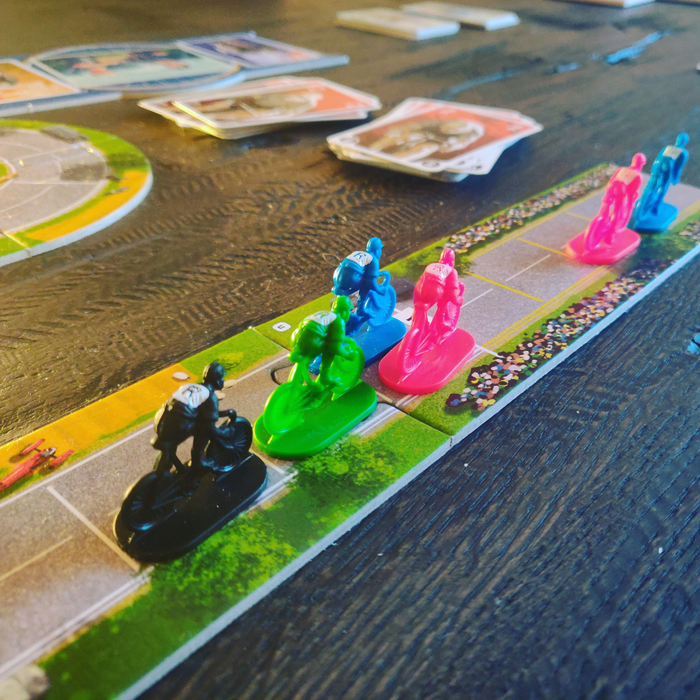 Thanks, I forgot I could jsut grab one off the internet :D

I always wanted to check out this game since it seemed well loved. Reading your description made me wonder if that's how typical cyclists feel when they're racing. Sure seems like the game did a great job catching onto that tension in the air. Thanks for the write up!

I know that slipstreaming and cycling in packs is a huge part of the racing/touring competitions. In say the tour de France, you willl have a team of cyclists with one or two who are actually trying to win. The rest of the team is there to keep them as fresh as possible by taking the brunt of the 'work' of being at the fornt of the pack so that later in the race they can break free of the pack and get a good time.

Wow this sounds super fun! I love the idea of trying not to be the leader for most of the time - it sounds like it makes for interesting tactics.

Yes, the ideal place is just behind the leader, but that is risky as you can accidently end up in front if they play a lower card than expected. If you are further back you risk either being left behind, which will mean you also get exhaustion.

Similarly if you misjudge it and end up trying to move onto a space already filled you lose ground as you have to wait behind them so you can end up using your cards really inefficiently.