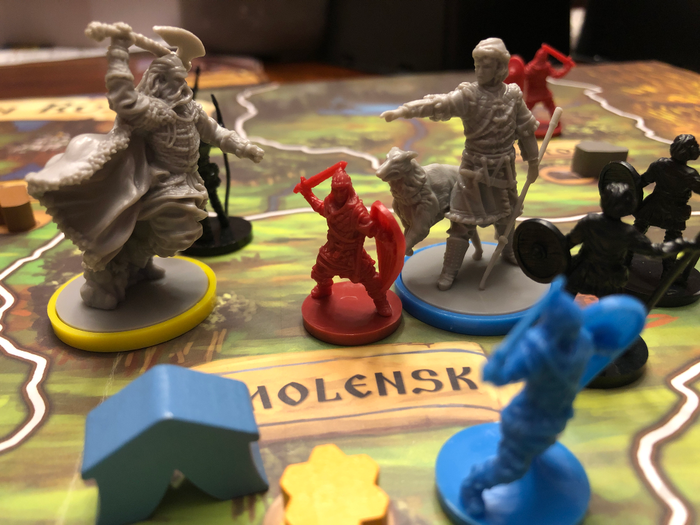 Alright, who's had a chance to play Rurik: Dawn of Kiev?

I reviewed it before its launch on Kickstarter and really loved it, and I'm pretty sure my review showed that. Then I was nervous that not everyone else would like it as I did! But, since its fulfillment to backers, it has stood the tests of scrutinous  gamers everywhere.

One of the reasons I like it so much is because of the Auction Programming mechanic, in which you place a numbered worker on an action space, and everyone takes turns doing so, round and around until all their workers are placed. The workers with the lower numbers activate before the higher numbers, but the higher numbered workers push the lower numbered workers down the action track, thus giving them less ideal actions of the type they wanted. You can even drop a coin to increase your worker's number by one per coin (technically, you could drop 100 coins, but that's a bit overkill if you ask me). It's an interesting game of bluff and hope and strategy.

And then there's the actual gameplay which is marvelous. So! What are your thoughts on Rurik if you've played it?

I love the historical theme. That seems really cool. This is the first I’ve heard of the game. Do you have a link to your review?

Here you go, I stalked Ben's twitter: http://www.everythingboardgames.com/2018/07/rurik-dawn-of-kiev-kickstarter-preview.html (I googled)

I thought I felt a stalking presence... haha Looking back at that review, I will say the components have improved. And the honey is no longer a yellow blob of a square. And yes, the review still holds up :)

Thanks Phil! I guess I could’ve done the same... But you saved me the trouble!

When I first heard of this game I had no interest in it. But everybody talks so highly of it, wouldn't be surprised if I would pick it up someday.

I’m not sure I Would have been interested either. It’s not my typical type of game, but it really does feel so good to play.

You know how it feels solo?

Solo is pretty great. That's actually what I played the other night. There was a lot of flipping back and forth in the rule book to make sure I was doing the AI actions correctly and in order. I just need to make a cheat sheet and that will solve that problem. The rebellion/solo cards make it very interesting and unpredictable--kind of like how it would be playing with another player. The solo mechanics are simple enough; it's the order of things (if this, then do this; otherwise, if this then do this; otherwise, if this do this; etc.) that can get tricky. Again, a small cheat card will solve the problem, and I bet someone has already made some (I should really check on that...).

So it is a decent AI as opposed to simply a "beat your own score" variant. That's nice.

Yup. And thee AI changes tactics depending on where you are on the progress board, how many lands you control, or how many goods you have on your boat. It's a nice touch, rather than just doing the same string of actions over and over again.

That does sound nice.