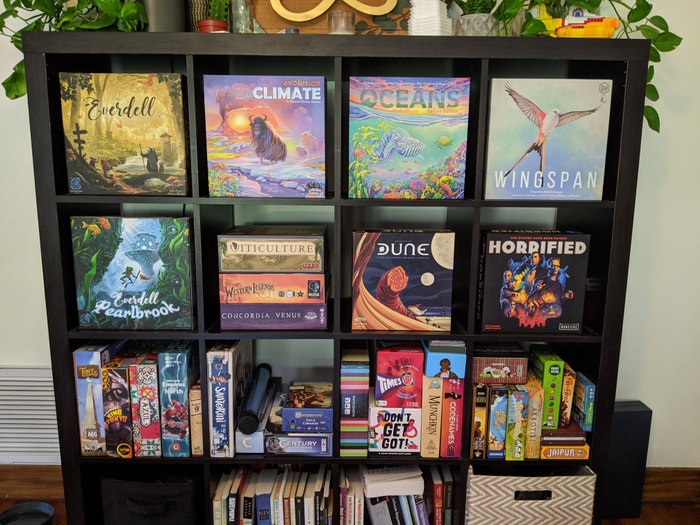 I never really thought I would be a collector of anything. When I was a kid, I collected enamel pins on our family vacations. That lasted a handful of years until I realized that enamel pins are boring. Today, I casually collect cool editions of the book Dune by Frank Herbert, or rather, I like to think I do. I have one cool copy and one plain copy, but I have my eye on a couple of other editions I'd like to pick up.
I guess I collect games now? It definitely didn't happen on purpose, and I still don't think of myself as a collector - I just like games and want to play cool ones. Apparently if you have a few games on your shelf that most people have never heard of, you're a "collector" and you "have a problem". I'm kidding, of course. The only people who give me a hard time about buying games are the same ones who will happily play them with me.
Anyway, I've been "collecting" for a couple of years now. My gateway/foundation game was #7 Wonders. I still really enjoy that game, but don't get it played too often outside of the occasional lunch hour at work. My first "cool board game" purchase was #Evolution: Climate - and that was when I realized...oh I guess I'm into board games now.
I guess now I'll answer the rest of the prompts as Phil arranged them in the Challenge post.

Wavelength is a bunch of fun, hope you get to try it out soon, we found it was best when no one was too focused on scoring or competitiveness and was just an exercise in exploring how we each thought.

I so want to play Dune, someone in my club has it so cannot wait until we can start meeting again.

Thanks! Yeah we hope to get an opportunity in a month or so.

And Dune is a really cool game. You have to be okay with a little bit of rules ambiguity, but if you can get past that, and if everyone is invested, it's awesome. It's especially awesome if you like the source material.

I read the books as a teenager, have been meaning to re-read them some time

I just finished book 5 recently. One more to go in the original series! I wish he'd been able to finish off the series before he passed.

My gosh, every time. Your shelf looks so cool. Also, I know that your wife is in an artistic field, but do you have some ties there too? At least, I feel like you do when I see even how you organize the text in your forum posts hahaha

Where did you end up placing #Concordia? It's such an awkward size. And I'm glad it's the newer edition--the old edition with that scary lady would throw off the entire look :)

Haha, thanks! I do not have notable artistic skills, I just like nicely formatted text, lol. I like to make things easily readable and skimmable. A fairly big part of my job is data visualization so...maybe that has something to do with it. Make sure the important things are easy to see.

And #Concordia Venus (Standalone) is in there! Just to the left of #Dune, below #Viticulture: Essential Edition and #Western Legends. I do actually like the sides of the Concordia box. The purple makes for a nice contrast. And fortunately (or unfortunately, depending on your perspective), the cubes aren't large enough to display the cover of Concordia anyway, haha.

Ah, now I see. And by the creepy lady, I meant her in the first edition of the original Concordia haha. I like the purple of that Venus box.

Edit: I'm still curious how that game will go for you and your wife :) (unless.... am I forgetting that you already played with her?)

Oh I know. The Venus cover is not exactly great, but it's miles better than the creepy lady staring into the "camera" lol

Also, is there anything hiding behind the upright games?

Nice, I understand why you have them upright those, the box art on some of them is absolutely gorgeous! I am especially taken with Evolution: climate

Man I absolutely LOVE that box cover. The art in that one (and its sequel Oceans) is so great.