Viscounts of the West Kingdom

I will get this one. When it comes to retail.

1. When I first watched Meeple University's rules video I moved this game quickly to my "I don't think this would ever be part of my collection.  The main reason was that there were a lot of rules so it would be a tough teach.  I could see it taking 2 games to get all the rules correct.  On top of that, after getting the rules right I was anticipating at least 2 - 3 games to get a good strategy figured out.  That automatically put it out of the running for me.  It takes a while to get 5 games in general in, let alone 5 of the same game.  Plus you'd need the same group.  I can see this game being very unfriendly to new players, especially if the other players have a lot of experience.

2. However, when I watched the play through it seemed much more straight forward than I originally thought.  I think most of the rules could be ironed out during game one, and strategy could have depth halfway through game one.  It is definitely one my future wishlist at this point.

It feels like the West Kingdom series is better overall and has more options for different gamers to get into the series, even if it's only with one of the three games.

Although now I've been looking at the other North Sea games and Explorers looks like it could be something I'd enjoy.

Ok so I likely won't back, but having read through the rulebook for #Architects of the West Kingdom and getting really excited to play it soon, it raised my interest level in #Viscounts of the West Kingdom by several notches. Also love the simplicity of their campaign (with very reasonable price points too) and it sure is telling of their direction toward going away from KS for future games.

Yeah, I won't either.  But after all the research on this Trilogy I rank my interest in the following order

1. Architects (very likely I will pick this up at some point)

2. Viscounts (it may be picked up someday down the line, especially if I find others interested)

3. Paladins (likely to not be purchased, I would however try it if someone else brought it to table)

I was going to mention that while reading through the rulebook and watching the runthrough for Architects, I thought the game would suit your tastes. They sure did a fantastic job with the iconography too! Very intuitive. But I just really like the use of virtue in the game.

Also, it is very high on my list of games I'd pick if I win the giveaway.  Once I am ready to purchase a new game (which I'm hoping again to hold off until 2021), it'll be at the top of my new purchase list.

It's too bad unlike Raiders that it doesn't automatically come with the metal coins.  It's so nice when playing Raiders to feel the metal coins when you are moving them around.

Raiders comes with metal coins?? I did not realize that. I wonder how long it'll take me to get those haha. I've been liking the idea of keeping a lean collection with upgrades more and more. I'll probably end up eyeing on a neoprene mat for Architects too (not sure if they've come out with it but I know they have one for Raiders)

Totally.  I am enticed by upgraded components especially with a lean collection.  We'll see.  I really really need to play my current collection more and gauge where I'm at at the end of the year.  But I do think I'd like to move to playing what I love and have and blinging it out.

When I was seriously considering Architects the one thing that kept creeping into the back of my mind was "I have only played Raiders once, slow down."

The only thing that is a bummer about Metal Coins in Raiders is it really makes me want them for other games, especially Viticulture and Scythe.

Yeah, there is obviously the possibility of player interaction with the arrest mechanism.  I'm also obsessed with the Virtue track.  It feels like dropping virtue could be helpful and quick to get resources but harmful in the end.  I would be tempted though to take that track.  But the Catholic Historian in my would really want to make sure I could be part of the construction of the Cathedral.

Wild, I did not expect this to be a KS

Haven't all their games been on KS?

Previously yes, but some companies (Stonemaier Games for instance) move away form a KS model as they have more capital to create games outside of KS.

This is the last one on Kickstarter. They have been thinking of moving off the platform for a while, but thought they would finish off this trilogy there first.

They’ve developed enough cachet for themselves now that I’m glad to hear they’ve grown beyond KS.

They have, but Garphill is still a very small operation at its heart, as far as i'm aware, they have 3-4 staff Shem, brother Sam, designer Sam and possibly Shem's wife Stephanie.

But, I think others are leaning on it more and more.

Oh I definitely think there are some publishers that need to move away from using KS exclusively.

I am looking at you CMON...

THEY KNOW WHAT THEY HAVE DONE

I am hoping that they move away from KS for their next Trilogy (I'm assuming they are planning on doing another one).  I do like that they are in a position to just have the game and not have backers hanging out to see the next stretch goals.  No stretch goals is really awesome.  They also built shipping in which is pretty nice.  $52 is hight for me without any KS bonuses (free metal coins).  Especially because once it hits retail you tend to see these games in the $32 - 35 range.  So no reason to spend an extra $17 now to not really get any extra game.

A clue on their next trilogy? (haven't confirmed if the "ninja" comment is true haha) 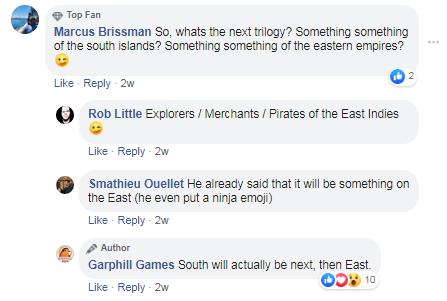 It'll be fun to see what they come up with.

There is already art for South and East. They appeared in Paladins of the West Kingdom in the "outsiders" deck

Yes!  I'm excited there will be a bit of tie in.  Very cool.

I did think that $51 was a little high. I hadn't noticed that it had shipping built in. I think with that it is very reasonable.