In many games out there, there's that one card that you hate or dread seeing because of its devastating effects. It could be a card played by an opponent, a card that comes into your own hand that leaves you with very little choices, or it could be the game itself presenting a brutal outcome (e.g. Pandemic-esque games).

What is that one card and why does it make you groan or fearful after seeing it come up? Pictures for bonus points and please explain in context!

The vampires in Set a Watch. Once they show up they steal some of your dice and you have less actions in a game where actions were already pretty tight.

Did you end up backing the most recent Kickstarter for Set A Watch? I think it was #Set a Watch: Swords of the Coin

I sure did : ) I actually had a chance to play a game of it during AwSHUX with Mike from Rock Manor Games, really excited for the game after that. Initially I was just hoping for more card variety but the merchant adds a nice layer to the game, letting you essentially modify the abilities of your adventurers further!

For me it's the dreaded Ambush in #Root especially when I don't have an Ambush of my own.  I've noticed they don't get used as frequently as one would think in our plays, but when they do it messes with your plan so much... especially if the battle was going to be close to begin with. 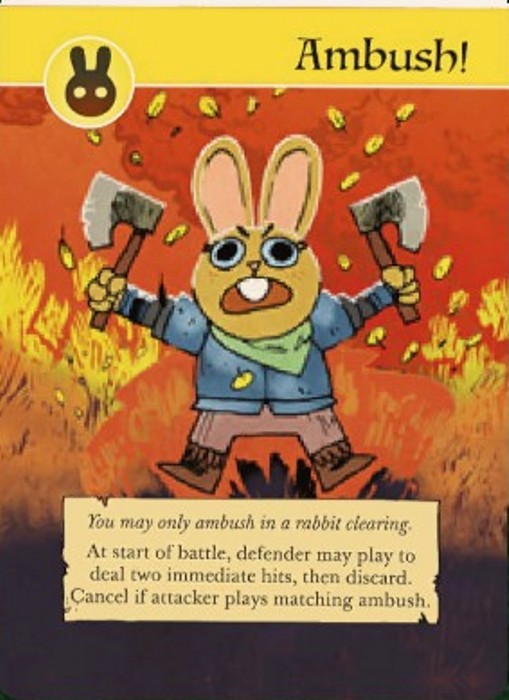 I've only seen an Ambush used a couple of times. I feel like you kinda need to plan your battles around Ambush cards if you have them, which maybe we haven't played enough times to have the experience to do that.

I think I usually see about one played a game.  The problem with waiting to be able to mitigate them is that then the warrior numbers for everyone are usually higher and can turn things into a cold war... which in my opinion makes it very hard for the meta game of trying to get others together for brief periods of time to attack someone.  This happened once when we were playing on TTS once with the mountain map.

Haha, yeah I could see that happening. I guess I'm more thinking about being proactive about picking fights in clearings that match your ambush card, not necessarily waiting for someone to attack you. You can take the higher roll, and then defend against their ambush if they play one.

It can be devastating haha. It was one of those instances when I foolishly thought I should go easier on my wife since it's her first time, and she played two in a row. I just looked at her like o_o

I'm never prepared with an Ambush of my own :(

OMG YES. #Guillotine "Callous Guards" card. It's terrible and stops the whole flow of the game. It really should be taken out. Even the designer agrees LOL 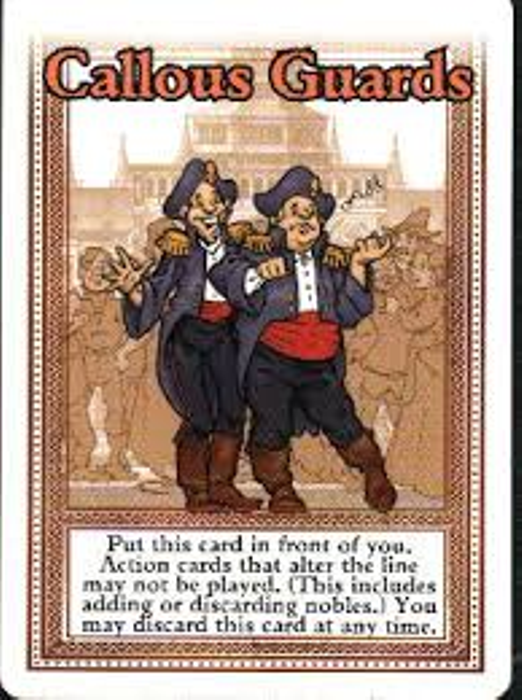 Whoops forgot to include the picture. Basically it prevents anyone from altering the line which is kind of the whole game.

I liked the short read, thanks! Interesting to hear parallels from Magic and other games, and especially about skipping players' turns..

I've yet to play #Guillotine but the quick explanation in that blog post was enough to give me the impression of a simple and fun game!

You're welcome! It was actually one of the first couple games I picked up when I came into the hobby. It's real simple and a whole lot of fun!

This is a slightly odd reference, but the first thing that comes up is the Queen of spades whenever I am playing the card game "Hearts". This is a trick taking game where you want a low score, if you get a heart that is 1 point, but the Queen of Spades is worth 13 points! It is hard to have in your hand because you need to figure out when to play it, and it also sucks to get when winning a trick because duh...

It is a very simple trick taking game. If you win tricks that have hearts in them you score a point per heart, but the Queen is worth 13 and you win with the least amount of points! There are some other smaller rules along with that but thats the general idea!

Hmm. Maybe it's just me but I always see the Queen as an opportunity to give points to another player. Of course it doesn't always work out but it is fun to try.

I do like having it so I can control when it is played but you can get back into a corner if you are not careful!

Oh, I also know of a card in #Aeon's End: War Eternal called Monster of Omens or something like that. He only has 5 health, but all damage dealt to him is reduced to 1. It's annoying because he's a lategame level 3 monster, so I keep on having to waste my high-damage spells to get him out of the way. He can be devestating during the game if you're in a rush to kill the nemesis and you're a tickle away from death

#Magic: The Gathering . I'm new to it, what's the name of the good-guy human deck again? Light deck or something? Anyways, I hate that pacifist card. There seems to be so many in the beginners deck. When place on a fighter, that fighter can't block, attack, or tap. And you can almost never get rid of card. I hate it.

I'm up for a challenge, and I get that co-op games have to be difficult, but when either of these cards come out in Sentinels of the Multiverse ,it's just depressing.

Well I can't get my own pic of the card right now, but there's a Deep card in #Oceans called "Migratory Exodus" that is the trolliest card in the game. It is hilarious for the person playing it, and can be absolutely devastating to the target. Some context on why this card is such a big deal. Say you've spent the entire game cultivating a fish-eating and scoring engine. Say you have a giant filter feeder that can store a ton of extra fish on it's species board, scores 5 fish a turn, and triggers gains (eating) on 2 other of your species, which are also able to score 4 each turn. You've got a great engine going that gets 13 points into your bag every turn in the late game. Here comes an opponent, playing Migratory Exodus. The text on this card reads: "Pay the cost into another player's score pile and take one of their species, with population."

So this card, while expensive to play (10pts), and is the only one that requires you to give points to your target, straight up lets you steal someone's species.

Here's a pic from the North Star website (the card is on the bottom left):

Ooof. That one card alone is making me not believe you that the game is nicer than #Evolution. LOL

Haha, that one card can be mean. But overall it's definitely less harsh than Evolution because you can't directly kill another person's species. Well, a couple of Deep traits might allow you to, but the vast majority of those do not. On top of that, because the Deep traits are unique, you can just remove ones you don't want to play with. The rulebook encourages you to do so, in fact. Don't want a mean game? Take out all of the extra mean Deep cards.

I was thinking it should be easy enough to just remove them! Good to know that's the case. It's still firmly on my wishlist don't worry haha

How often does that come out?? Any counters for that?

Not often. There are like unique 100 Deep cards in the deck, so odds are against you that it will even get drawn, and then the person playing it needs to make sure it pays off for them, since it costs quite a bit to play. Or you can be like my friend the first time we played, and laugh hysterically when you draw it and then play it just because it's such a fun card, regardless of whether or not it's a good idea strategically, lol.

And no, there are no counters for it. The fact that it costs 10 to play (note the costs of all the other cards in the picture) means that it's not a sure thing to be played, even if it's drawn, and the fact that you have to give those 10 to your target rather than the ocean doubles that hesitation. But if someone decides to play it, you just have to deal with it, haha.

I have learned to dread the first Dominance Check card in #Pax Pamir (Second Edition) when I am playing solo. Maybe I will get better at it.... But so far, it seems like the Wakhan takes off fast, and if I can hang in long enough, I can catch up. But, that first Dominance check, I feel like I will always be far behind.