updated 34 days ago | posted 6 months ago

With more and more people recently receiving the vaccine, perhaps the end of this nightmare is on the horizon. With that hopeful thought in mind - let's make a dream game night that you absolutely can't wait to get done. Talk about which games you'll play, who you will invite, and anything else that will figure into your dream game night!

This post was inspired by the recent SU&SD podcast. It was a fun podcast to listen to and it will be fun to see what you all want to do!

One of my biggest hopes post covid is to find 3 other people to run through the #Scythe: The Rise of Fenris campaign.

I still haven't had a chance to get to this either.  Hope you can get to it soon.

I realized last spring that my local group was likely to be on FtF hiatus for some time and that World Boardgaming Championships wasn't going to happen. So I got together with some friends and rented out an airBnB for a weekend to hold our own "CoronaCon"! 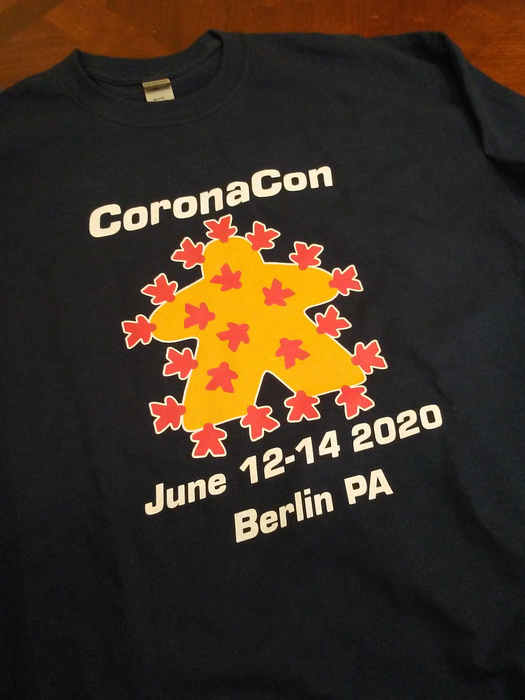 We're doing it again this year, over Memorial Day weekend (CoronaCon: The Second Wave). I'm hoping to get in some #Struggle of Empires, #Time of Crisis: The Roman Empire in Turmoil, 235-284 AD, #Pax Pamir (Second Edition), and probably some #Oceans. That and drink plenty of brown liquor. :)

Other than our RPG groups meeting in person again, I want to introduce some of my board game groups together and play a large game of #Sidereal Confluence

I think I would love that game but have literally 0 chance of ever playing it. Just not enough board gaming friends.

I also enjoyed that podcast episode a lot!

I have such a list of games that I want to get to the table with 4+ people, as have been solely two-player for a year at this point. But if I had to choose I think the following would be my first game night post-covid:

We'd start with a quick game of #Flamme Rouge, it's great at two but there would be so many more hilarious interactions at four, plus it can play in twenty minutes so is a nice straightforward intro game to get everyone's brain working.

Ideally, then another friend would turn up late so I could follow that up with game of #No Honor Among Thieves at 5 players. It's a superb game of negotiation and betrayal to really shatter the friendships with people I haven't seen for months. In actuality the betrayals don't feel bad as they are mechanically baked into the game and happen enough that it doesn't feel as much of a gut punch as some games.

Finally, I'd get everyone to be friends again I'd get them all playing a game of #Catacombs (Third Edition), an excellently thematic dexterity dungeon crawler. Doesn't take too much thought so a good one to end on.

I also am desperate to organise a day/weekend of #Twilight Imperium: Fourth Edition for a group of my uni friends, so there's that.

Do you have the expansion for TI4?

I don't, I got the base game during lockdown when I got a couple of giveaways back-to-back. I have been being very careful because of work so wasn't going to drag 5 friends into my home for the whole day.

Have you tried it?

Thankfully I've already been in a position of having "post Covid" games nights for quite some time... but I'll play in the sense that they heavily featured#Root and a new gaming group that is really meshing well with similar expectations for how a game is played.

Yeah, it's been great.  I still will get together with my old group again a bit (and maybe mix them, although that makes it a big group).  But the new guys are kind of a natural progression.  We are in the same stage of life, etc.  Plus one of the guys is a much bigger geek on Board Games the way I am so it's really great.

Also, they love #Root and loved #Pax Pamir (Second Edition) the times we've played it.  Feels like it's going to be a heavier leaning meatier crunchier gaming group.

Also, our wives are all friends and we often hang out with our whole families together.

This is a fun question.

Last summer, I posted a query on the Nextdoor app asking if anyone in my small rural community (we're 20 miles outside Portland, OR metro area) was interested in having a game night together.  A handful of people replied, but due to the increasing covid numbers in our county shortly after my post, we've not been able to get together and I've never met them.  Since then, two of my neighbors have been joining me twice a month for a game night.

I would invite all of those who responded to my initial post to a game night group.  (And @cbrady748 and Sarah if they happened to be here.) I would want to play any of the following games: #Wingspan, #Cartographers: A Roll Player Tale, #Scythe (still unopened in the closet), #The Quacks of Quedlinburg, #Terraforming Mars, #Alhambra: Big Box and #Clank! In! Space!.

We'd pull out our Italian Soda bar, have a cheese board with other snack foods, and play some nice international music on Pandora (or ask my teenage son to pick a mix from his Amazon Music account).

My only question for you would be...why are you are limiting this to a 4 hour event?!?! :P Even @WadeB1977 is making our upcoming game night a full day affair!

I'd play all night if I could!

This sounds incredible. Wish some of you folks lived close by me - would be amazing to game with you all.

BGA Con is much needed!

I agree. It would be amazing.

@cbrady748 is traveling across the country an evening of revelry and a day of board gaming. I think distance might be relative 😉

"How far would you travel for board games?" should totally be a forum topic lol

I totally would have but yesterday I got an error message for posting too much on the forum. Pretty sure @philryuh was trying to sabotage me from winning the giveaway lol. :P

@trentellingsen fixed the "glitch" for me but it's still sus. LOL

Where do you live?

I've been there are few times for business in years past.  Always enjoyed my visits.