I got to play more Ultimate Fighters: Creatures of Titan this week. It's the game I designed and that @philryuh did some of the art for! 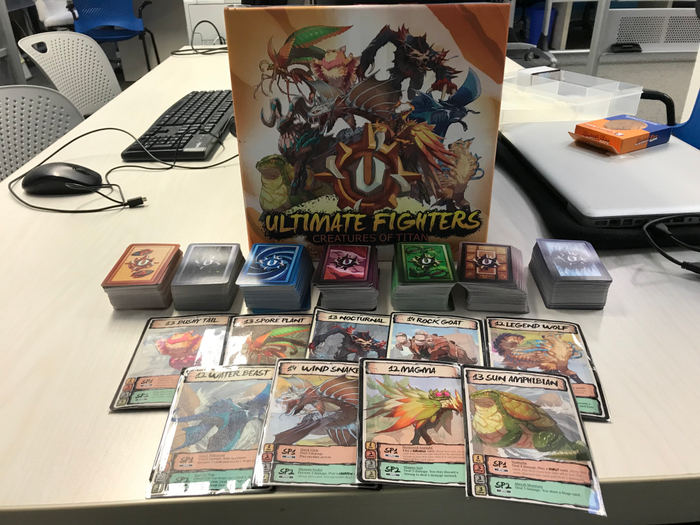 Wow you guys did a great job! I don’t know much about the game but I’m for sure going to check it out!

Wait can we add photos on comments now!  Sweet.

We would have played more but our oldest who was visiting has major AP so it almost doubled the length of every game.

How do you like Reavers? I've been able to play it once so far, and I really like the worker placement aspect of it. Different, but I thought it worked really well.

I really like it. I have the KS version so it has all the nice bits.

I have played it three times now, and I am still exploring different strategies utilizing different combinations of locations. I haven't explored a full sea battle strategy yet, so would like to try that. Diversity, with a focus on keeps or lands seems to be the strongest so far. One thing I am finding is that after about round 3, no one chooses the Reavers action anymore. That location may be too in balance for it to be worth a first player choice in mid to late game.

Overall though, I enjoy it as much and perhaps more than champions.

Nice. Yeah, I have the KS version as well. Really need to play it more. So far I still like CoM better, but I really do love Reavers as well. Of the 4 of us who played, three of us were neck and neck at the end, and we all focused on different things. It felt pretty well balanced. But yeah I agree with the first player action; it doesn't get used much late-game.

I got to play a ton of different games this week!

ive been eyeing keyforge for a bit because of the price point. Is it worth putting in the queue of games to buy?

So I've never played any dueling games before this (Magic, Yu-Gi-Oh, etc), but I find the game very fun. I think it does some things that are unique, such as only being able to use cards from one "house" per turn, and of course the unique deck aspect of it is really cool.

I was attracted to it because of the unique decks, as I have no interest in building decks or paying lots of money for powerful cards. I love the fact that you just buy a deck for a few bucks and you're set. You do need at least one starter pack between the two of you, though, as that has all the tokens and whatnot, not to mention the rules. It does come with two decks, however, so it's completely playable by itself.

The only downside is that, because the decks are all unique and randomly generated, they're not all equal. This isn't that big of an issue, but it does mean that you'll probably but at least a handful of decks, instead of just one, which I'm sure is what they want you to do.

I don't know about replayability, as I've only played twice so far. I could see matches between the same decks becoming stale after a few times, but it's only a few dollars for a new deck, so that's not a huge deal to me.

Sorry if that was more words than you expected lol

Haha no that’s great! It’s been on my radar, plus it gets pretty cheap sometimes. And yeah the unique decks are super cool. I think that’s what made me the most interested!

Yeah it's a really cool idea, and implemented pretty well, as far as I can tell. They also keep adding and removing houses with newer sets to keep it fresh, which is fun. So I personally have 4 decks - 3 from "Call of the Archons", the first set, and 1 from "Age of Ascension", the second set. I don't have any from the newest set, but it doesn't really matter. All decks are playable with all other decks. I think they introduce a new mechanism or two in each set, but you can play against a newer deck with an older deck just fine. Your deck just won't use that newer mechanism, and the other deck might.

lol if you have someone to play with, I'd say go for it. 3 friends and myself went in on a box of 12 decks on Amazon for like $36, and then we drafted the decks. So we each ended up with 3 new decks for $9 each. They're from the first set, which is why it's so cheap, but it doesn't really matter unless you're playing competitively, which we don't.

That’s a great idea, thank you!

Who did you play as in Dune?

Bene Gesserit. Unfortunately we were not able to finish the game, but it was a lot of fun!

I don’t know anything about the game, but based on the book I think I’d really enjoy playing as Bene Gesserit.

They're probably the trickiest faction to play as, but definitely fun.

I do like tricky factions so that might be right up my alley (if I ever get a chance to play it).  I've heard it really shines with a lot of player.  How many did you play with?

6 players. So far we've only played at 6 (2 times). I really don't see anything less than 5 working well, and less than 4 seems terrible. 6 does seem optimal, because you have the option to have 3 separate alliances, and there's an even number. At 5, if people ally up, someone will be left out, and at 4, if people ally, there's just 2 sides instead of 3, which seems less fun.

If you play at lower player counts, the first faction the rulebook suggests you leave out is actually the Bene Gesserit, and the next is the Spacing Guild.

Thanks for the insight!  I usually am able to get 4 - 6 people.  Of course I don't know anyone with Dune currently so at this point it's moot.  But maybe some day.

If your group is a fan of the books and enjoys heavier/longer games, I'd say it's a must-play. If there aren't any fans of the books, or maybe you're the only one, it's a tougher sell.

Player count makes it a game I will probably never play. But it looks so awesome.

Were these with family or with a group?

Some were at work, some were with family/friends over the New Year festivities, and Lords of Waterdeep was just on Saturday with my brother in law and his cousins.