After a light week the previous week, got a ton of gaming in this time around.

You had a pretty solid week of games!

Yeah it was great!

What faction did you play as in Dune?

Atreides. So far my favorite has been Fremen, I think, but I've only played 3, and only once each, haha.

I remember having this conversation before, I have heard from other news sources that Fremen are the least powerful but I know you like them! Who did you form an aliance with?

This game I was allied with the Emperor for the majority, and broke it off to ally with Bene Gesserit in the final turn. The Spacing Guild (with Harkonnen) ended up winning with the Spacing Guild's default victory condition.

Did you come close to winning with that betrayal of the Emporer??

Eh, we had 3 battles to fight and lost all 3, lol. Although this morning I realized that I technically should have won mine, but it wouldn't have made a difference in the outcome of the game.

Tough break, the combat in #Dune is pretty brutal for everyone involved

Great mix, I am very jealous.

Oh, great list!  Just played Oh My Goods! on the weekend as well.  Fun game!  All the rest are great although I have only heard good stuff about Dune as I haven't had a chance to play it yet.

Dune is pretty great. The annoying thing is that the rulebook misses quite a lot of common situations that can arise, but the BGG forums are pretty active in answering questions about it.

That's good.  Those type of games always have a lot of edge cases I tend to find.

Yeah for Dune I would say don't even begin to play it without printing up at least the official FAQ, and probably a fanmade one as well, haha

We are in the process of moving so we really did not get much in aside from Chapter 4 of #Aeon's End: Legacy!

We got out first Crokinlole board in this week and are having a blast with it.  Highly reccomend this to anyone with the space and money (although "only" 100 bucks through Mayday Games.)

We also played #Twin It! the BGG version with the art from board games.  This is a quick and fun dexterity game where you need to match like pairs by getting your 2 fingers on them before your opponents.  We also loved trying to guess what all the games are on the cards.  Here is a link to it in the BGG store: https://boardgamegeekstore.com/products/twin-it-board-games-edition-english?_pos=1&_sid=1e8f6ceb8&_ss=r

Lastly we played #Winner Winner Chicken Dinner  A family friendly dice chucker with a ton of luck and some fun cards that can make you have a cluck off (who bet sound slike a chicken) or a dance competition to see who best does the chicken dance...plus the game comes with a rubber chicken squeek toy that serves no purpose other than to be used in the game with your imagination.  I really like that.  It's very light weight and kids friendly but also fun.

Crokinole is a blast. Glad to hear you are enjoying it.

This week my wife and I have played 2 games of #Flamme Rouge, 1 game of #PARKS, and a couple tabletopia sessions as we learn new games.  We played 1 online game of #The Gallerist and 1 online game of #Petrichor to see if we'd be interested in the current kickstarter to get a complete version of it.

I usually naturally fall into the role of the rulebook-reader as we learn new games, but we've been sharing that role more often lately.  She dove headfirst into learning The Gallerist and Lisboa, and we agreed that each Lacerda game one of us learns is worth at least 3 other games the other has to learn and teach.  Lisboa might be 4 games-worth even.  Petrichor was my first at equaling out the score, so we'll see if I get out of my games-learning hole before the end of August.  I might give On Mars a go just to try to realistically even that out before this month ends.

The weekly gaming goals list still has #Anachrony, #Comanauts game 3, and #Gloomhaven: Jaws of the Lion scenario 4 on it, so it's been a fortunately busy gaming week for us.

What was the verdict on #Petrichor? And that's awesome that the two of you are able to share the rulebook burden. I do it all myself and while I have no problems with it, diving into ones for heavy games can be overwhelming xD (I'd dare not touch #On Mars..)

Oh and I've heard that #Gloomhaven: Jaws of the Lion's difficulty jumps up when you get into scenario 4. I've yet to get into the 2nd scenario myself but want to when time permits..

We definitely had fun with Petrichor.  The tiles they suggest you use for the first game are pretty simplistic, so the fact that we had fun with the most basic and shortest version of the game is a good sign.  It's a competitive game, no doubt, and there were some cool thematic moments we enjoyed and were cooled out by.  We both miss the tactile part of gaming playing a digital version of it, so we'd only like the physical game more.

Yea, I've heard the same about scenario 4 of Jaws.  I was surprised at how quick the first 3 scenarios felt, but it's a good ease into the game.  We don't have any dungeon crawlers, so it's a new kind of game for us.  I'm enjoying playing through what feels like a good step forward in board games in terms of the game teaching you as you play.

I think I remember seeing that Petrichor has (raindrop?) components simliar to the mystic energy in #Atlantis Rising (second edition). So I imagine playing with the physical game will be a nice tactile experience. 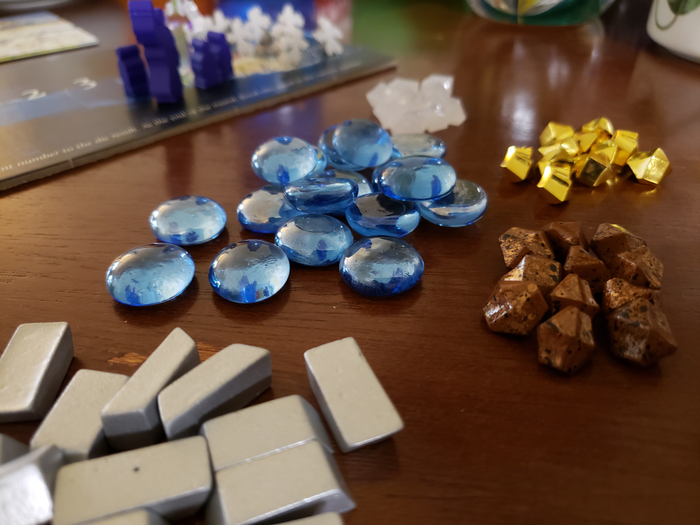 And nice! Jaws of the Lion is my first in that genre too and I could immediately see why there are so many fans.

Don't think I've managed anything this week so far, but hopefully tomorrow!

My son and I played the first five sessions of #Gloomhaven: Jaws of the Lion. It is designed pretty well to play into Gloomhaven by teaching you the full ruleset over 5 sessions. It is a great entry into the system, and for the price of the game, there appears to be a great amount of play.

I just want to give a shout out to #Egizia: Shifting Sands. I have been playing many worker placement games that all blur together but the Nile river mechanic limiting your choices in Egizia freshened things up.

#The Crew: The Quest for Planet Nine

#City of the Big Shoulders

My game group met online yesterday but we are in the middle of a heat wave (and we don't have air conditioning in the UK) that we just played #Codenames because our brains were too fried to do anything else.

What online method does your group use to play Codenames? They have their new digital site but it is only the original and it is limiting so some people still play with physical copies over zoom/facetime/hangouts. Always curious to hear preferences.

We tried out the digital site, it actually worked pretty well. I haven't tried zoom codenames so can't compare but I would recommend it as an alternative