Obsidia: Build Your Empire and Rule the Realm

The daylight stopped coming, and land has become scarce.

Obsidia is an ancient banishment realm where the four largest colonies desire control. They must expand into the unaffiliated towns in order to recruit new members, with the goal of having the most towns under their power.

You can get a copy of Obsidia with all unlocked stretch goals, high quality digital images of the amazing art, and and your name in the rulebook for $40. Check out the campaign before it ends on Thursday, May 21, 2020.

Obsidia is a dark fantasy board game with tile placement and area control. It is for 1 to 4 players and takes about 90 minutes.

The four colonies send travelers to explore the treacherous landscape. Tiles are added to the board layout by the players to create a different challenge for each game.

There are different terrain types, each with their own effects on the game. If you encounter an ice field, you'll slide through to the other side. You'll gain extra ground, but can't change direction. Mystical Portals allow you to travel to another portal. A Boneyard is where you can make armor and weapons from the bones.

Each colony practices a unique style of ancient magic. Spells are used to influence others, improve weapons, alter traveling speeds, and call upon deadly beasts.

The colonies each have their own unique spell deck. No spell card is repeated, not even within its own deck. A card drafting variant allows the players to customize their deck with cards from different colonies.

There are five phases in each turn:

I. Adding a new tile

Spells may be cast throughout your turn, by you and other players. For example, Tile Phase spells may be played in the Tile Phase (I). The cards have a number on them to show their corresponding phase.

After all terrain tiles have been placed, the winner is the player who occupies the most towns.

If you have Table Top Simulator on Steam, you can try Obsidia for free.

You can find a link to the current rulebook, discounts for ordering multiple copies of the game, and information about a new solo mode that doesn't require any changes to the base game, plus great videos and more, so be sure to check out the campaign before it ends on Thursday, May 21, 2020.

Wow. crazy cool art on this one.

Agreed, love the art. They have a pledge level for the digital art, which I think is neat. 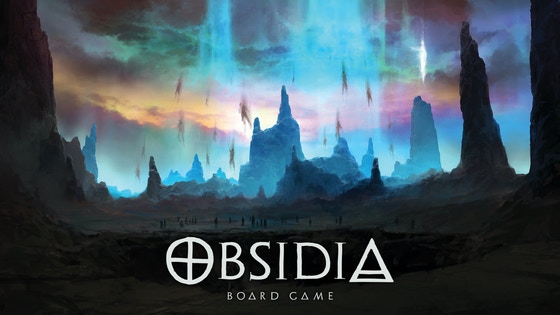