Here we will take a look at the 10 top pirate board games based on popularity. This is a series to take a look at a specific board game mechanic or category and out of every game ever released in the space, what are the most popular as of right now, the middle of 2021. We will give some information on each title, as well as, some insight into why it might have landed at its particular spot on the list.

Pirate is a category so it is the backdrop and hopefully seeps into the game in meaningful ways that will build on the experience. Out of all the themes out there, it is certainly one of the most vibrant, iconic, colorful and adventurous. And even with that being true, there are not that many of them. Luckily for you, there are, however, some really good ones. Take to the seas and go on a search for buried treasure. The theme can be applied to many different archetypes so you are going to see everything on this list from heavy strategy games to light party ones. 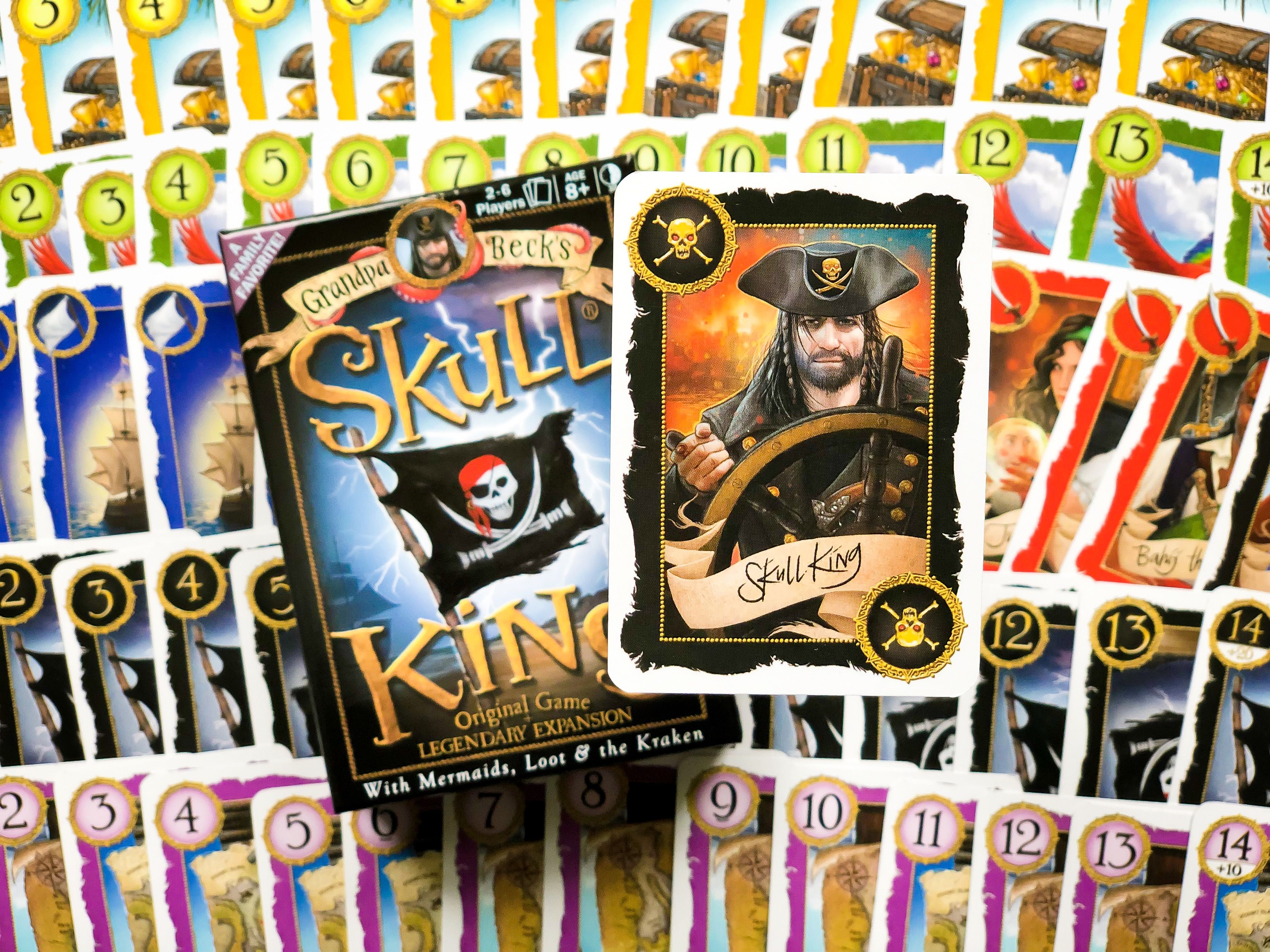 This is a very light and breezy trick taking game. It never quite topped any lists but it held on and was able to set itself apart, probably because of it's vibrant pirate theme. Originally coming out in 2013, this title has always been in the top 1000 out there and a consistent pleaser. Now that the trick taking world has been taken by storm with #The Crew: The Quest for Planet Nine we will see if this one holds on to its market share.

Players need to state how many tricks they think they'll win each round. A unique element of this game is that bidding takes place simultaneously, leading to rounds that are sometimes over, or under-bid. As players must win the exact number of tricks that they bid to earn points, winning too many tricks is just as bad as winning too few and this leads to intense competition where losing a trick can be as exciting as winning one. 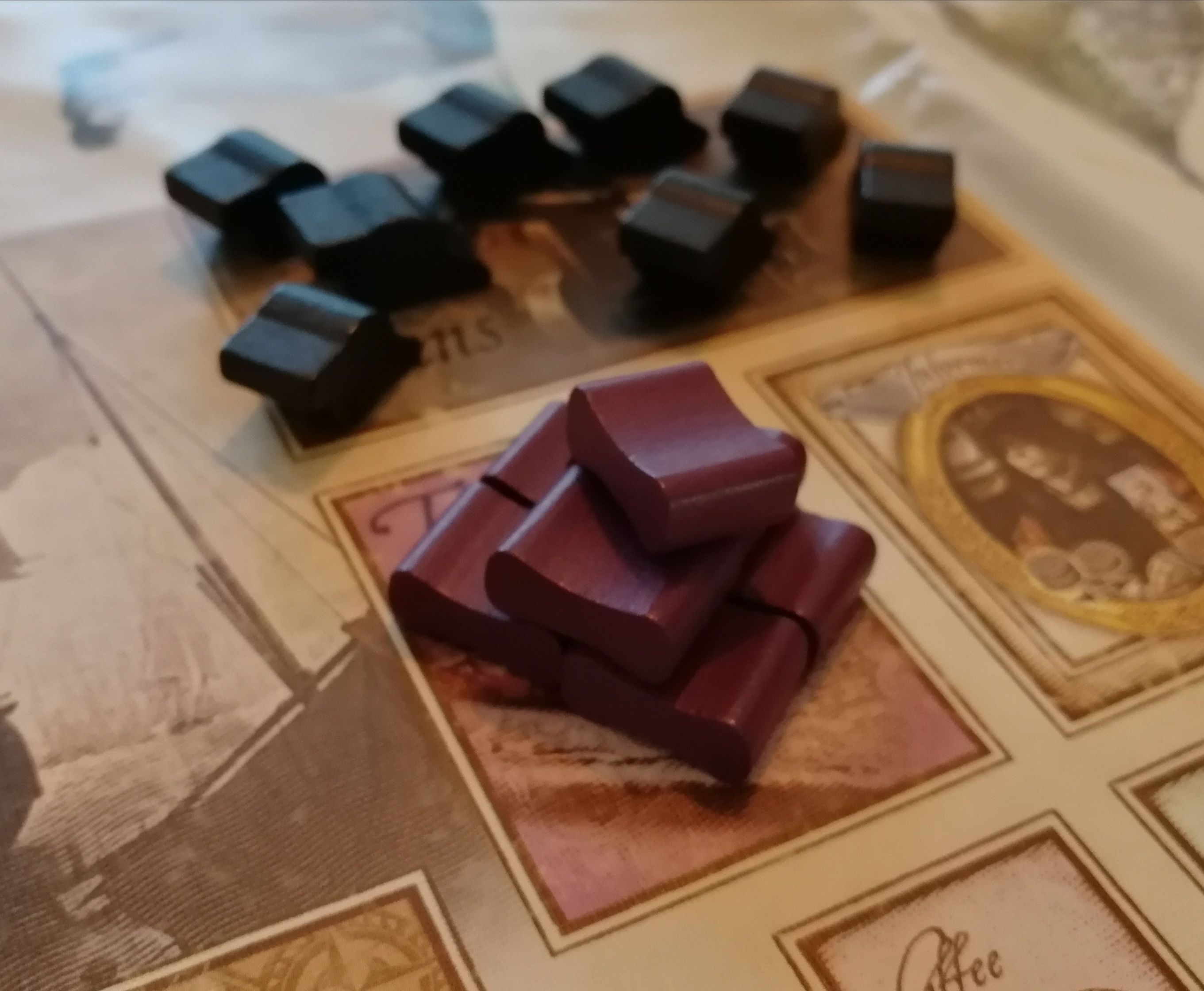 This one is not easily obtained, coming out in 2013, but it still holds on to its popularity which says a lot. The game just does a fantastic job of mixing together many different strategic mechanics like secret unit deployment, worker placement and push your luck. This game is more renasance than pirate but it has enough elements to make it into the category.

Return to a bustling Plymouth Harbor in 1572 as an aspiring Elizabethan captain making preparations for three exciting voyages in search of fame and fortune! As captains, players will have to plan their missions and provision their ships accordingly to be the first to set sail and reach the Spanish Main. Make decisions about how you will stock your ship, what your crew looks like and what information can you get and use. 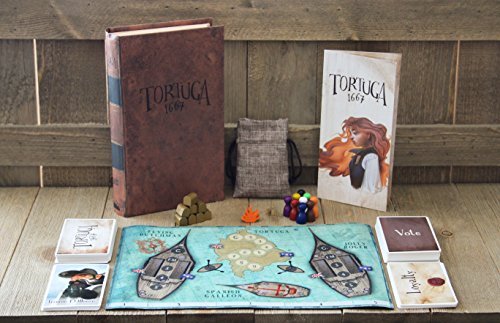 The pirate theme has not really made it too far into the party genre but this is a great example of how it could. The theme mixed with the communication and deduction is almost at the same level of #Secret Hitler, but of coarse not close because that game is amazing. Coming out into 2017, the title is still a bit new. Its uniqueness and general satisfaction level could keep people coming around.

You are a pirate sailing the waters of the Caribbean in 1667. A big score of Spanish treasure brews internal conflict and not everyone is going to make it out alive. Tortuga is all about the communication and interactions from working with your shipmates to attack the Spanish Galleonto the very next turn having your shipmates stab you in the back. Turn actions are dictated by a team-based voting system that uses communal event cards. 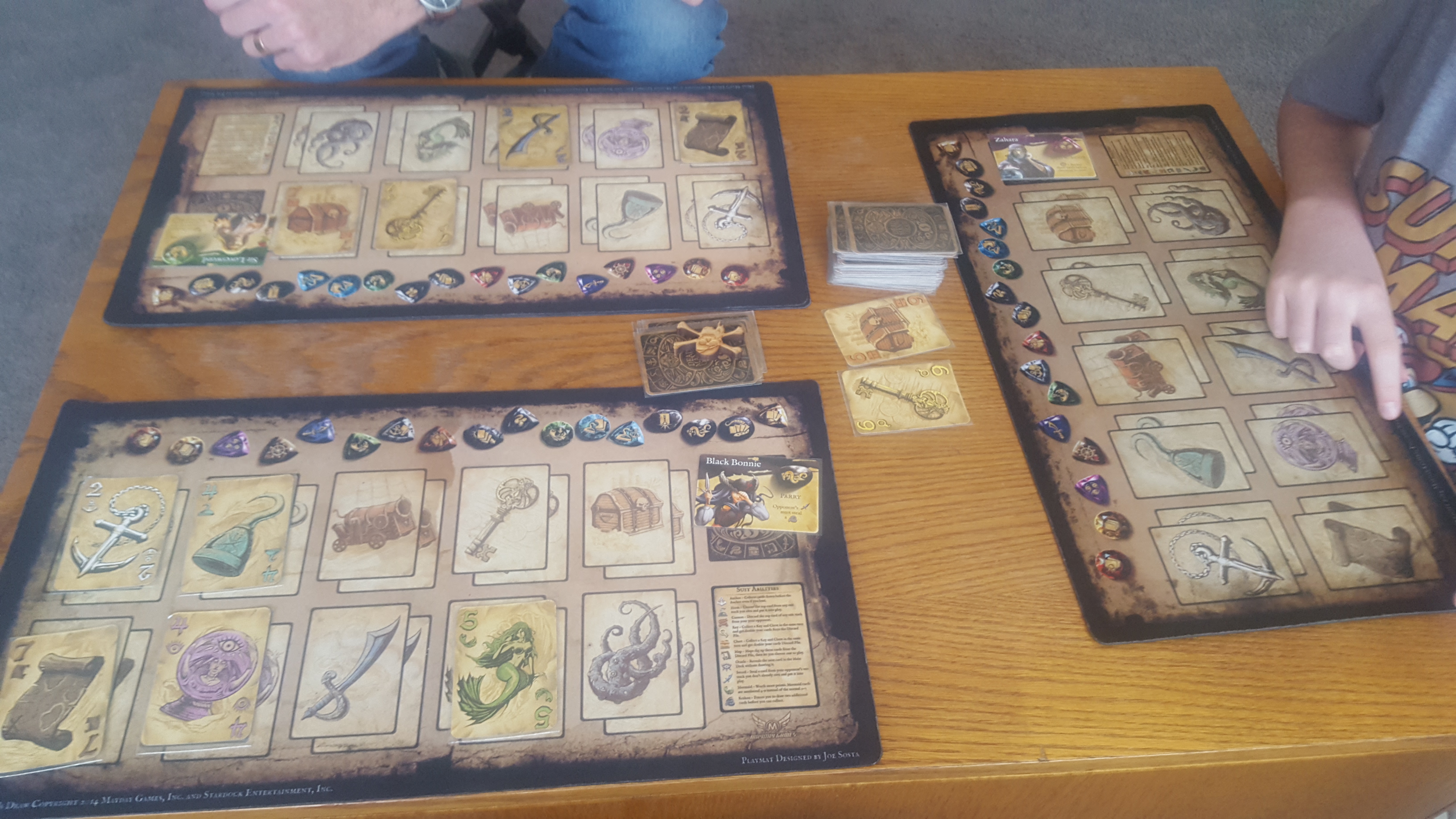 This one is pure excitement. It is nothing new, it is that brand of push your luck + take that bringing the stakes higher and higher until a thrilling conclusion. This card game does that with the pirate theme and it does it well. This game appeals to a wide audience so it makes sense that after coming out in 2015 it is still trucking along.

Players take turns drawing cards and combining their special abilities to plunder the most loot without busting their entire hands. The core of your turn in Dead Man’s Draw is all in the flip: pulling the top card off the deck and using its special ability. Your turn isn’t over until you say it is, though. You can keep pulling cards as long as you like – until you play a card of a suit already seen, at which point you lose everything. 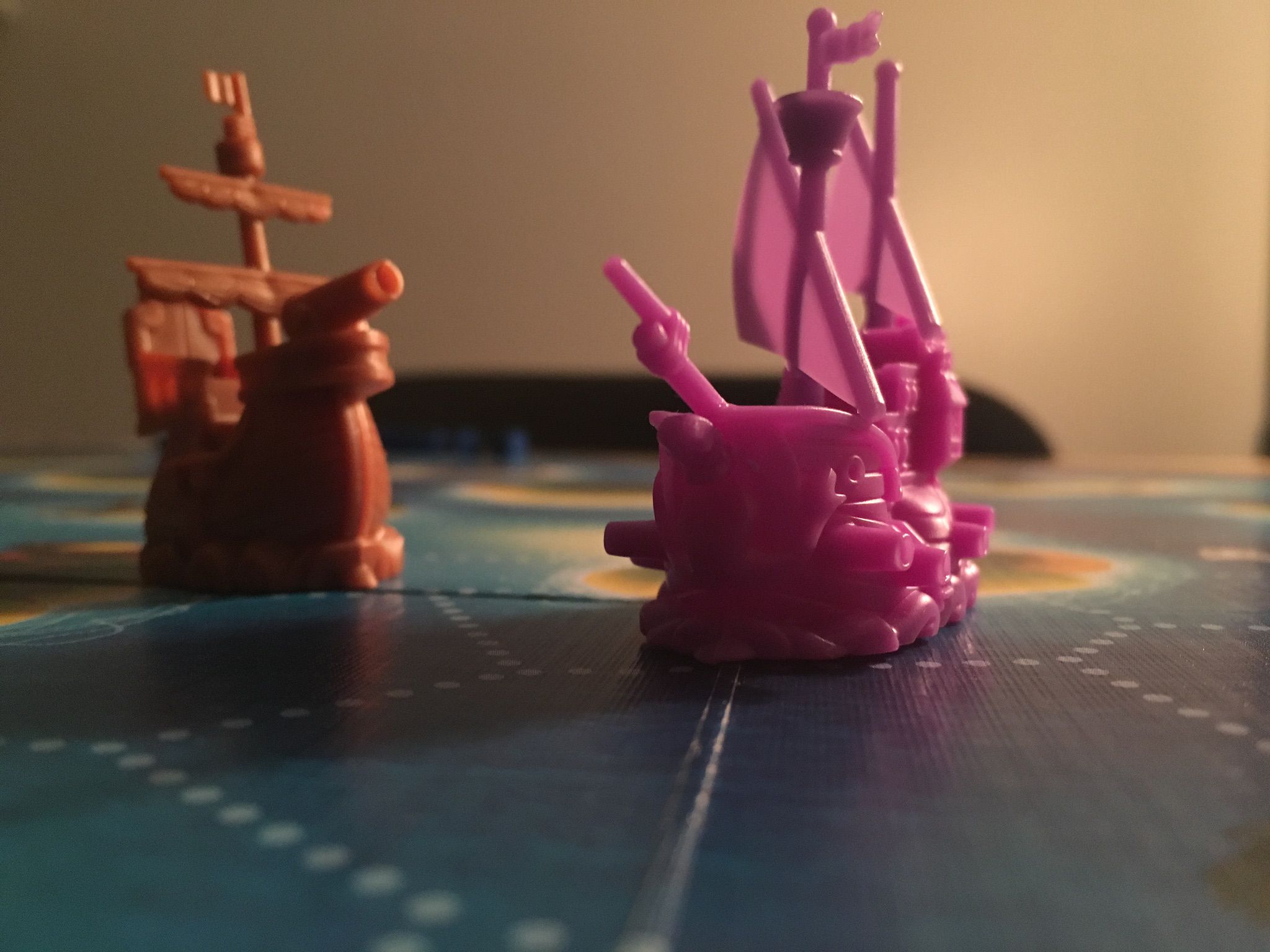 The name alone just screams exciting pirate adventure and the game delivers. Coming out in 2014, this is another one that has managing to stay relevant over time. It uses in the theme well but much of its popularity derives from just how good of a pick up and deliver game this is. Sure you could strip the theme out and it would still be good, but it adds so much.

This is a tactical card-driven board game where you're in command of three different types of ships: your merchant ship earns you doubloons by conveying goods from one port to another, your pirate ship by attacking and stealing goods from merchants and burying them on islands, and the Navy ships by sinking your opponents' pirate ships. With your money, you'll improve your ships by buying advancement cards, giving you powerful additional abilities. 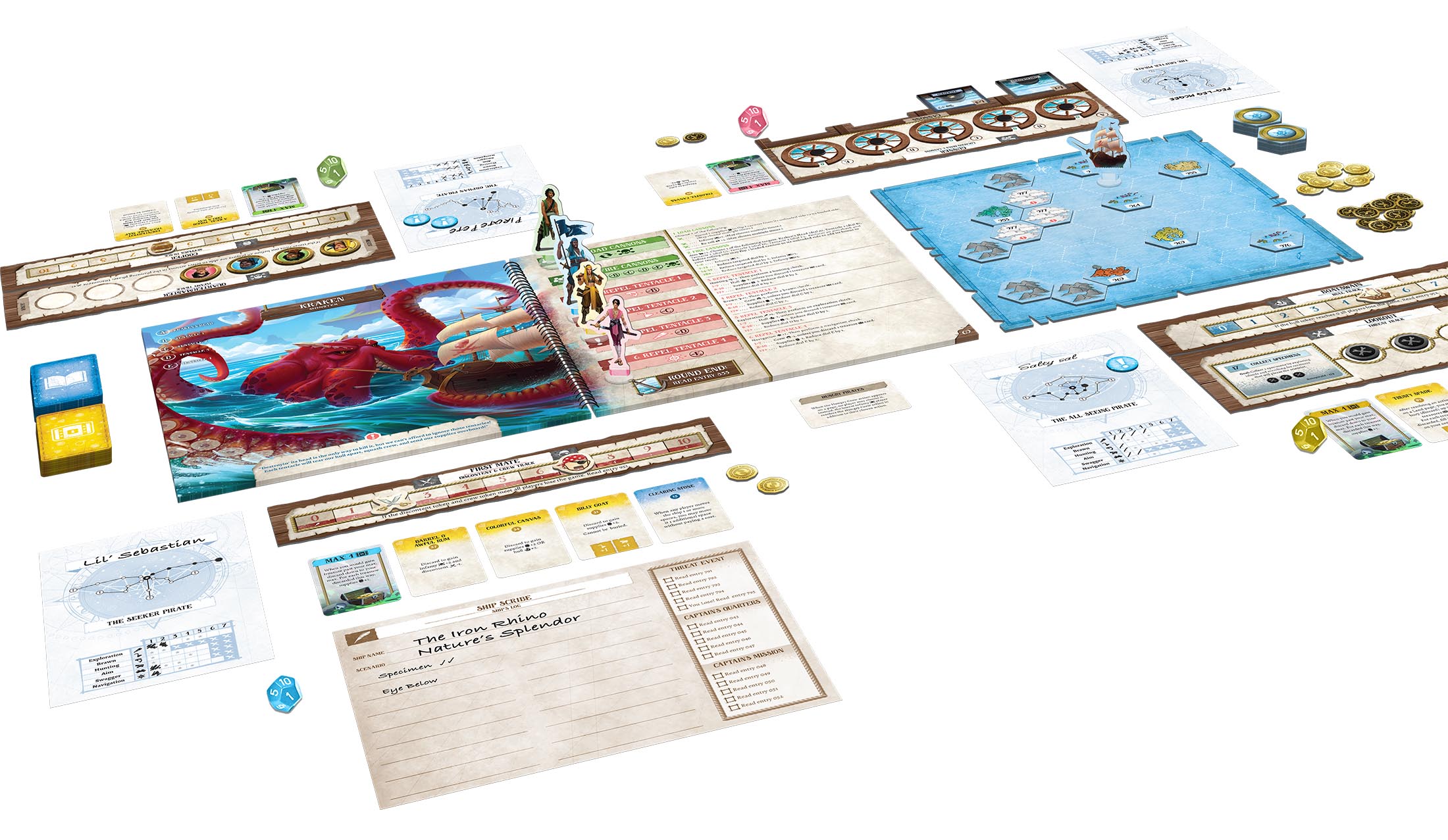 This is a title on the list that came out not too long ago and is benefiting from it. The game is very cool so it makes sense to see that buzz translate into a burst of popularity. Publisher Plaid Hat Games always does a good job and they put a lot behind this one. It is an interesting dice rolling campaign game that is not quite like anything else out there so its ranking on the top pirate board games is certainly justified.

This is a "crossroads" game, just like the popular #Dead of Winter: A Crossroads Game, which basically means semi-coop. Players take on the role of pirates sailing together on a ship, attempting to further their own personal stories as well as a common goal. The world is silly and magical, with stories designed to encourage players to explore and laugh in delight as they interact with the world around them. It's a game in which every choice can leave a lasting impact on the story, and players will want turn over every rock just to see what they find. 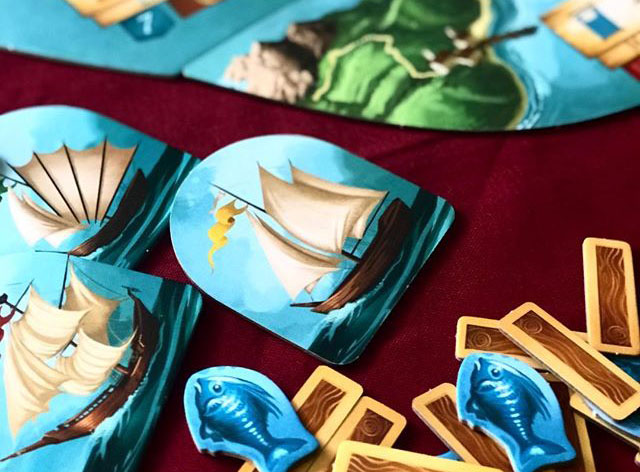 This one is brand new and hot off the presses such much of its popularity is hype driven, but it is well deserved. Islebound is a good one and puts the pirate world to good use. This is a medium weight drafting and area control game that has you doing things like collect treasure, hire crew, and conquer or befriend the archipelago's island towns. This one will fade a bit, but it is a good game so it should stand the test of time.

Players take command of a ship and crew. You sail to island towns, collecting resources, hiring crew, and commissioning buildings for your capital city. Each building has a unique ability, and your combination of buildings can greatly enhance your strength as a trader, builder, or invader. You also recruit pirates and sea monsters to conquer towns, which, once conquered, allow you to complete the town action for free, and charge a fee to opponents if they want to use it. 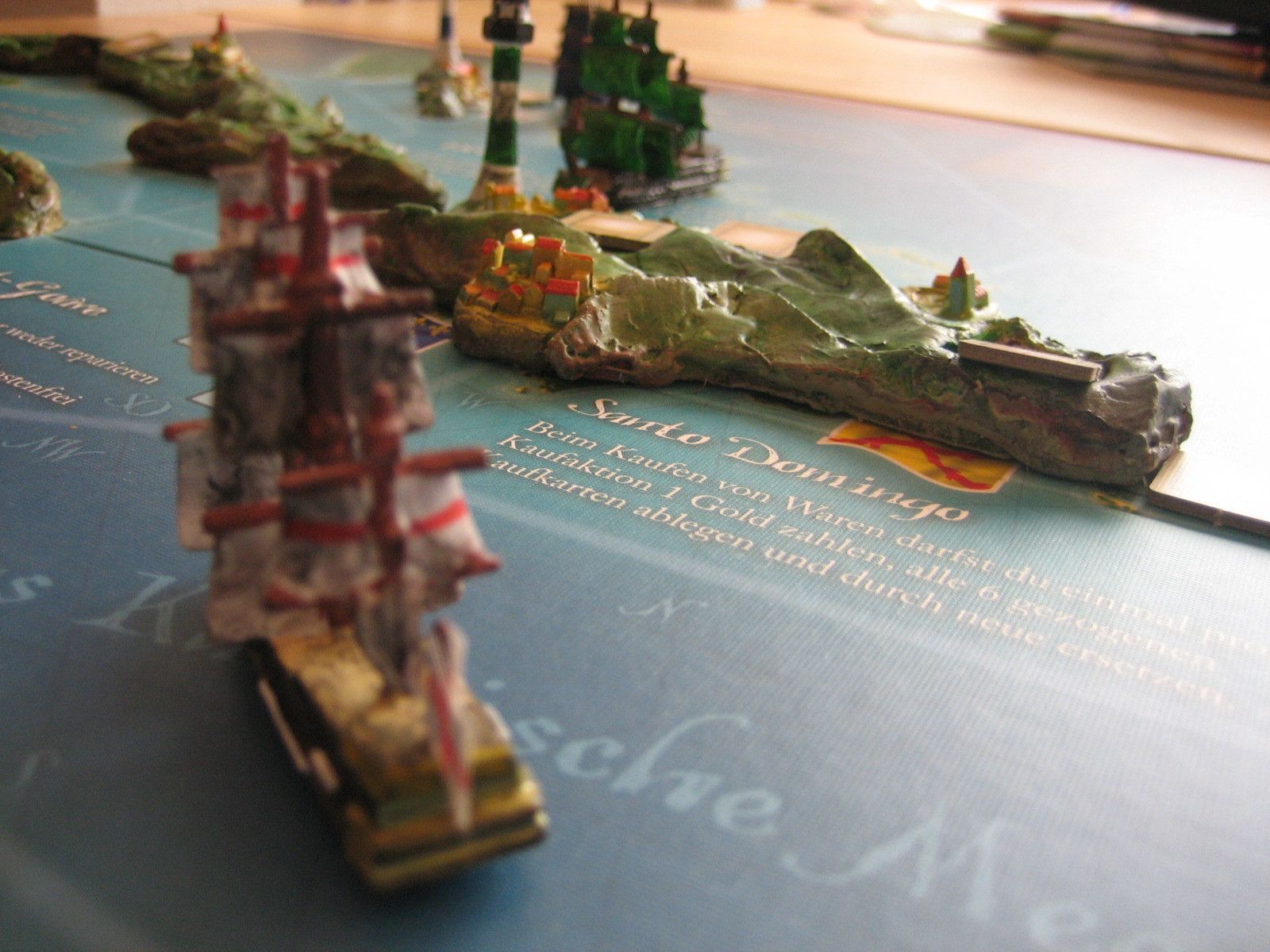 This is about as rich and exciting of a pirate experience as you are going to get on this list. You have all these great things to do. This is a heavy do what you want with your available action points type of game with options that range from hunting to missions to plundering. This is one that has held on strong over the years, coming out in 2010, for good reason.

The game lets you live the life of an influential merchant or a dreaded pirate in the Caribbean during the Golden Age of Piracy. Seek your fortune through trade, rumor hunting, missions, and of course, plundering. Modify your ship, buy impressive vessels, load deadly special ammunition, and hire specialist crew members. You are the captain of a small vessel in the Caribbean trying to reach 10 glory first. 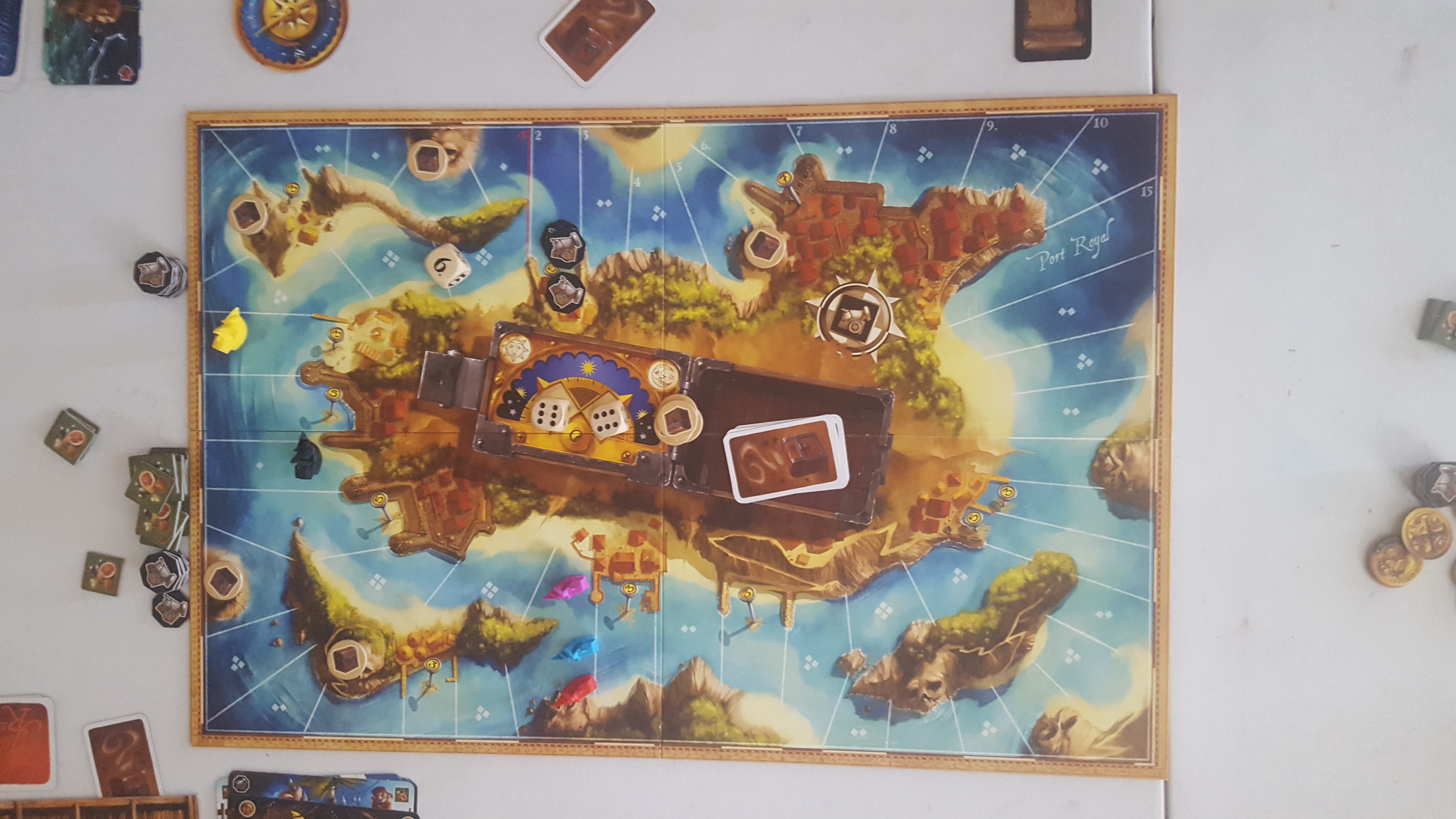 Who doesn't love a race. You do not see much movement around a track stuff these days but it is still going pretty hard in this genre. The pirate setting is a rich part of it, sailing around the namesake island you are not just trying to be the fastest but you are doing pirate things, like picking up treasure, the whole way. This is a popular one and surprisingly unique so the popularity makes sense.

This is a pirate-themed tactical race game with player interaction and side goals (e.g. detouring for treasure). The winner is the player who best balances their position in the race with their success at the side goals. The game ends on the turn when at least one player's ship reaches the finish line, completing one circuit around the island of Jamaica. 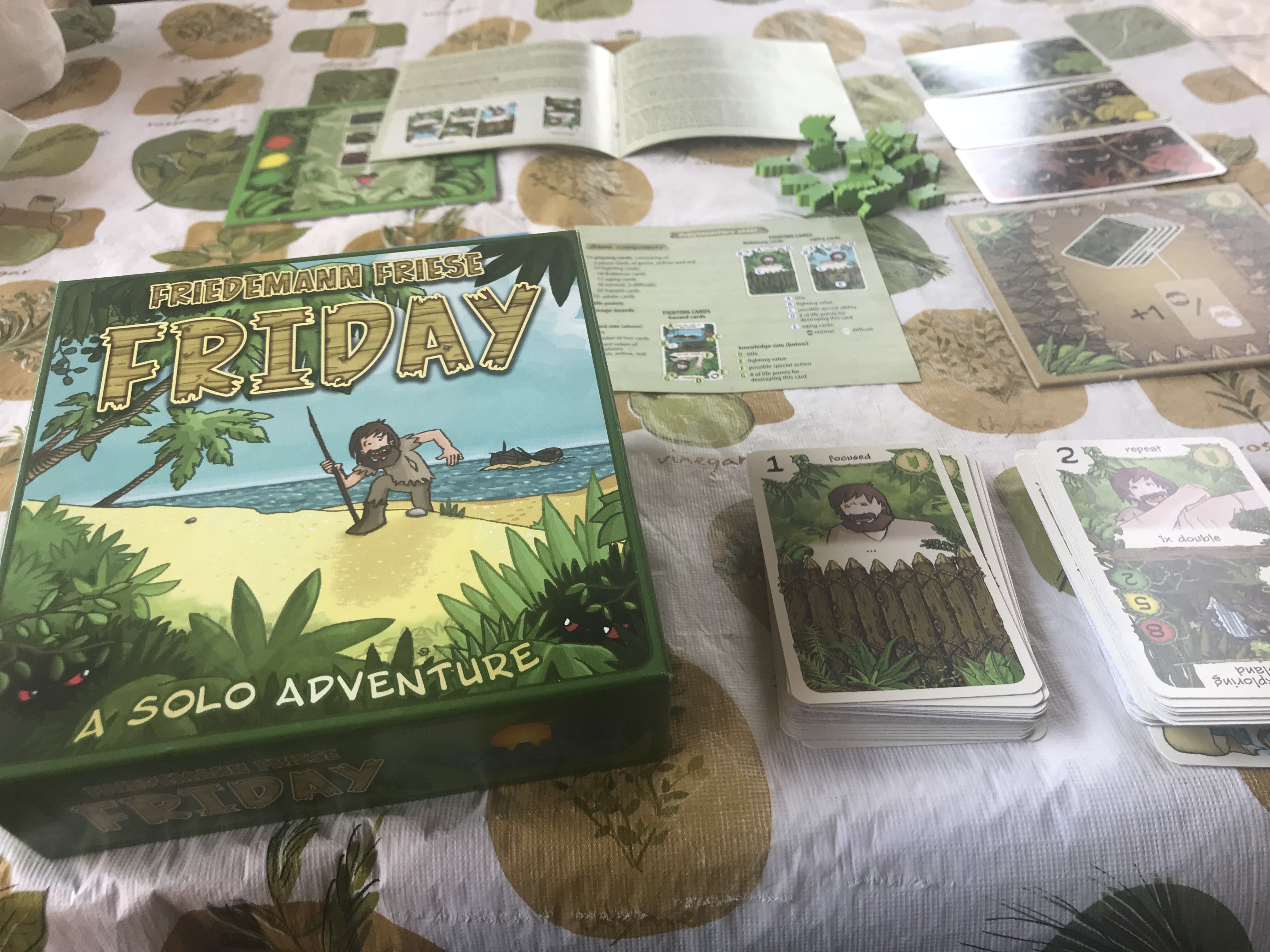 Ok, for the game at the highest spot on the list of the top pirate board games, it is kind of sad to see that it is not too pirate like but it is fantastic. You are surviving on an island and pirates do come into play, but not very much. Yes it is only for 1 player, but to be fair that is always an option. Overall this is just a super high end card game that doesn't just make this top list but easily makes the top list of one player games. Not too many people know about this one, but the people who do love it. The high ranking is justified.

If you don't you lose life and the conflict gets added to your deck, making things difficult for you. The end showdown will have you facing off two pirate ships in order to gain vicotry. This is a great 1 player game because it is fun and there is nothing else like it. Whenever you have a game that is built specifically for 1 player, you know the mechanics are going to lend themselves to a fun experience.

What do you think are the best pirate board games?

I am shocked and a little offended to not see Libertalia on this list.

Agreed. Also #Port Royal. Whould this list also include space pirates or is that a different list :P ?

yeah, ya could have easily left of Friday. It is good, but not very piratey. May as well put Villainous on the list. Oh well, maybe if the roumored reprint happens, Libertalia will get the love it deserves.

#Dead Reckoning was the one pirate game that I was interested in buying. The idea of sleeving your pirate crew cards to upgrade their stats was very intriguing. I've played Friday several dozens of times on my phone. I sometimes love frustratingly difficult games so I had a lot of fun figuring out how to die less frequently :D

Dead Reckoning would definitely make the list if it was available. Still waiting on KS here for it & it looks amazing!