I played #PARKS this week with my wife. It was very enjoyable. It is beautful, and has some crunch. We were thinking about playing it as we visit different parks and having rangers from each park sign the cards.

That's a fun idea! Did you back the expansion on KS?

I didn't. I just got this copy retail.

Oh was just gonna say cause my copy was supposed to arrive soon and...it arrived today! 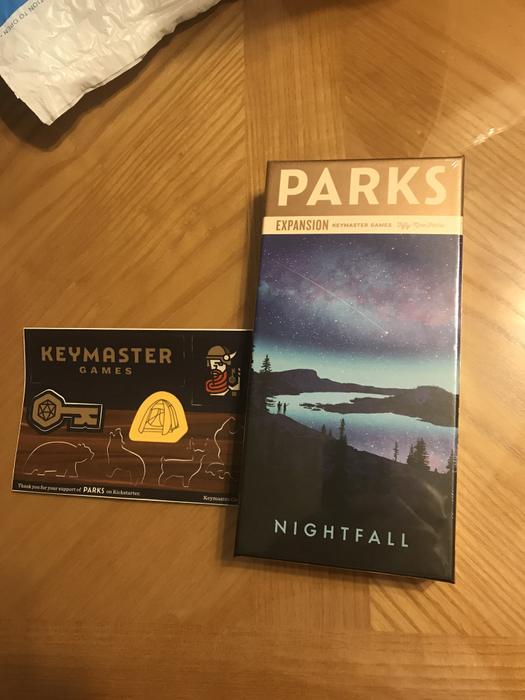 Right?! Can't wait to break this out hopefully tomorrow!

Slow week for me. As usual, all games at 2 players with my fiancée unless otherwise noted.

#Codenames: Pictures - Picked this up from the FLGS we went to in Philly last weekend. We played twice, winning once. Have to try this one out with our parents.

#Gloomhaven: Jaws of the Lion - Got this on Prime Day for a killer deal when factoring in some gift cards - paid around $10 of my own money. I had created a forum post with some quick thoughts on my play but when I went to submit it, I got an error message so I decided to save them for here. I've played #Gloomhaven at 3 players with a friend of mine and his wife a couple of times (would be more if not for covid) so I was largely familiar with the mechanics going in. We got through 2 scenarios before we called it a night. While I appreciate the tutorial aspect of everything especially for newer players like my fiancée, it was a real slow build for me. I mean seriously is a long rest really that difficult of a concept to not cover until scenario 3? LOL. She found it a bit tedious too after I started explaining the additional rules for scenario 2. This may be more a reflection of how boring I sound..might need to look into a narrator app lol. At any rate, we won both scenarios without much trouble and we're looking forward to playing this more.

#Super-Skill Pinball: 4-Cade - Back in August, my group had an in person "anniversary" to celebrate a year of the group's existence. It actually had started as a Meetup Group at a local bar. Anyways, one of the guys had given everyone a laminated PnP of this game with the intention of playing it over Zoom together. For some reason, I had interpreted this as "hey check out this game I made" and I never gave it any second thought until recently when I realized it was an actual game lol. Last night I watched a how to play and gave it a try solo. It's interesting for sure but I can see there being a whole lot of upkeep for a pretty simple roll and write. Not sure if I'll give it another go, but I'm glad I at least attempted it!

I played a few games of the PNP super-skill pinball 4-cade and was a bit underwhelmed as well. It's a very well-realised concept though, and a clever little design. I think the proper components would make a huge difference. When you play it multi-player it can be pretty boring waiting for someone's turn to finish as well.

I will admit it did feel like I was playing a game of slow motion pinball lol. But yeah I could see how multiplayer could become excruciating

Hhahah I can see what you mean with #Gloomhaven: Jaws of the Lion. As someone new to the game, I still really enjoyed the first scenario and appreciated the walkthrough, but I realized afterward that I had added two extra monsters by accident. That would have made it a breeze. And when I introduced my wife to the game, I think she was a little bored/uninterested because of the low difficulty as well. It was already late in the evening so pushing for scenario 2 seemed like too much, and it left the session a bit anticlimatic/uneventful. I still haven't gone past into the scenarios but have heard scenarios 1-3 are all quite easy.

I think she will enjoy it! She does not like losing not matter how hard or easy it is lol. We will see! Hopefully Christmas delivers!

Oh the low difficulty didn't bother me. It was more so that I knew the rules and slowly adding them in little by little was yawn inducing lol.

With regards to your rules goof, the two times we played Gloomhaven, my friend and I totally messed up the monsters turns. We barely made it through the first scenario and lost pretty badly on the second because of our mistakes.

I have not played quite yet, but it is on my next up list to play with my wife. She loves RPGs and coops in general so it could be a good fit!

#The Crew: The Quest for Planet Nine on boardgame arena

Just joined today I see..welcome! Most of these games I own too. Jealous you got so many people to the table!

Got back to it this week, but also had some sillyness thrown in!

My wife is actually wanting to try out #Pax Pamir (Second Edition) (she asked first lol). She's been doing photography for us and it's one of the games we've asked her to take pictures of. She got curious because (1) it looks beautiful and (2) she's never played a "historical" game.

Edit: This means that I need to get in 1-2 solo sessions this week to digest the rules completely!

The heavens have opened up wide and have blessed you!!

Sure hope it goes well! I usually have a good idea of how much she'll enjoy a game, but this one, I honestly have no clue.

The game is hard to get a hold of in terms of who will like it and who will not lol.

I'll have to decide whether to go for 2p + Wakhan or go 2p only. 2p only will keep things more simple and easier to learn, but will also make it more competitive between the two of us. Not sure yet!

I have only played 2p+ Wakhan and it defintely evens the playing field, but I can see a learning game going more smoothly without her. If you are comfortable with running Wakhan and she runs quickly then it would not be bad, but I can see it bogging down the experience at first if you are trying to figuring out what she needs to do!

Yup, hopefully she'll like it. Although, I'd personally like to play #Clank! Legacy: Acquisitions Incorporated if she's up for a game night haha. It'd be a safer choice for sure

Either way, it is still great.

Very nice week! Wish I could get some plays in of #Secret Hitler! That's one I miss the most from my board game group. I do agree it's a little difficult to play as the bad guys at first. My only suggestion would be if/when you are the President, try to elect a fascist Chancellor and give them a fascist policy to get a head start. Then claim you had no other options. :P

Ya I am thankful that some of the guys in my circle have been careful and we feel comfortable meeting up again! I was actually Hitler the last round but was elected President like the second to last round, I had lost the trust of everyone by then lol.

I haven't played as Hitler yet but I would imagine that would be really difficult!

You truly are alone on an island! Not positive who is who really and it is hard to know when to strike!

That is a solid week.