#Tiny Epic Dinosaurs arrived this weekend and so of course I had to try it out and talk Becky into playing one game.  I played a game as if I was two players (the Rahdo approach) and ran a solo game and then talked Becky into a game.

I've played #Tiny Epic Galaxies and comparing the two games I like this one better as it feels a little deeper.  I backed the deluxe version and have the research lab that adds to the speed at which you can obtain dinosaurs.  This is largely a worker placement game with some area management aspects trying to keep your park arranged and dinosaurs fed so as to prevent escaping and losing a fence.

The meeples are amazing and very detailed for how tiny they are!  All the purple ones are unique dinosaurs and each one is its own meeple.  The art is vibrant and bright and setup is very easy.  You couldn't play this in a car on a trip but with the box being so small it packs nicely.

So how does it compare to #Dinosaur Island?  It is not as complex as #Dinosaur Island and lacks the same depth.  Same would go for #DinoGenics (a game I hope to obtain one day).  There are quite a few options available on the action mats from obtaining resources to capturing dinosaurs.  I like that they include what is essentially a grande worker ( #Viticulture) that makes taking an action a little easier if a worker is already on that space.

The solo version was nice and I found it reasonably challenging in my one playthrough (I think I lost by 3-4 points but it was close).  The key to winning is chasing the contracts and with limited space to work with in your ranch fulfilling 3-5 contracts (including one private contract) seems like the norm for a game.  One thing I didn't like was having to fill a public and private contract at the same time.  This felt unweildy at times.  I will try a house rule next time where you have to fulfill a public contract but once one of these is fulfilled you can fill a private contract on another turn without having to do both at the same time.

The research cards providing unique dinosaurs and "game-breakers" is nice and quite helpful when used well.  They seem to operate a little like the GEAR in #PARKS that require a little getting used to to maximize well.  The game is fairly short and took Becky and I about 30-45 minutes and that being somewhat of a learning experience.  There are enough choices to make that even a 60 minute game seems reasonable if you're thinking through al your options.

All in all not a bad game that seems like it can use a few tweaks.  I think a couple action spaces might benefit if they were enlarged for more than 1 worker to be placed without penalty.  I'll have to play again to think through which spaces might increase the competative dynamic without breaking the game. 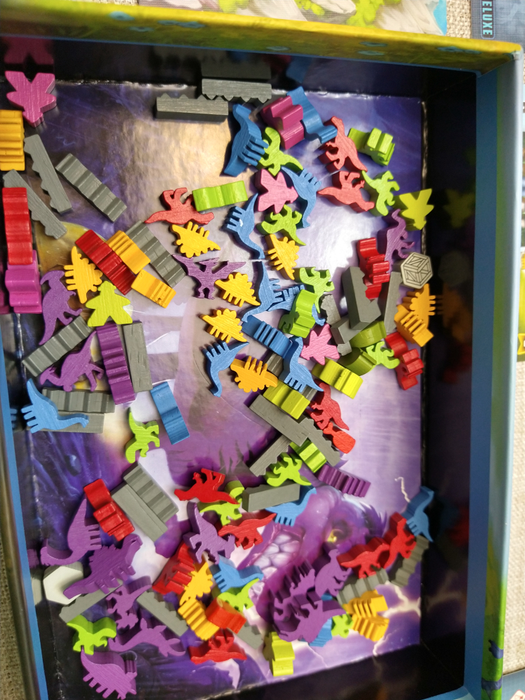 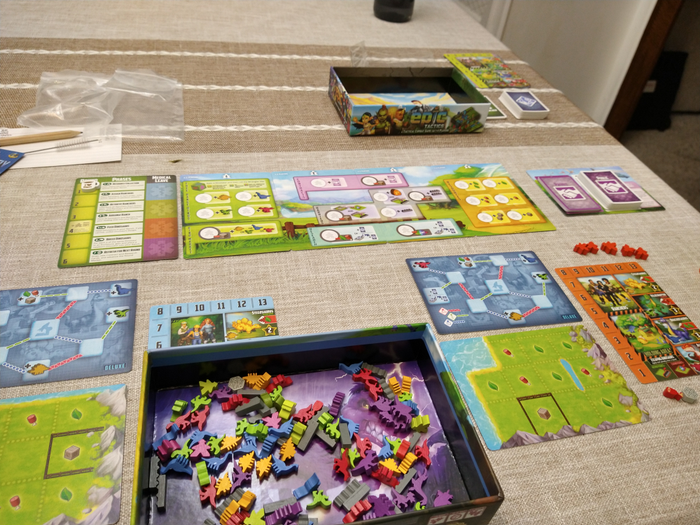 Nice, I have heard a lot of hype around this one, it looks like a lot of fun. I only have #Tiny Epic Quest from their series but it is a really nice little adventure game. I've always found that they occupy a middle ground between filler games and 'main course' games for me.

https://www.youtube.com/watch?v=BOIv7jvaquA I finally managed to get my poor quality video uploaded. I apologize for it being dark and the camerawork being less than stellar :)
1
[-]

That's such a fun looking game, I've been seeing pictures of this pop up on Instagram a lot lately. So currently, do you think that this won't come out as often in comparison to games like #PARKS on your shelf?

If one of the kids plays it and like it it will come out more. I don't see it coming out as much as PARKS or Wingspan or Paladins or probably Architects as my daughter has started asking to play that and with some part upgrades 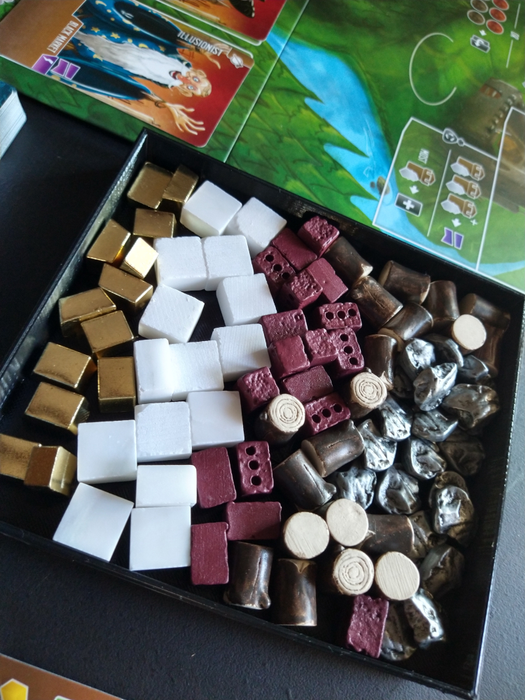 She will be into it even more. That being said, I'll pull it out for the solo experience several times, take it on trips, and whenever someone gets the dino itch.

They are some pretty cool resources! Although I think I prefer the resources from something like #Agricola (Revised Edition) as opposed to realistic resources. They tend to fit into a game better in my view.

Gotcha. And that's awesome that your daughter's wanting to play, and I wonder what other games she'll take interest in the future.

And oooh Now that looks like marble! As much as I enjoy #Architects of the West Kingdom solo, the resource tokens on that game are very minimal haha. Has playing with these upgrades been a big upgrade in the overall experience?

I'm not sure how much it upgrades the overall experience.  Maybe though, I know my wife and daughter enjoyed playing and my daughter enjoyed making tiny artistic creations with the new components.  There's probably and argument both ways...lol.

Wow, those meeples do look awesome. Did you mean that you'd house rule some of the action spaces there at the end of the post?

I did a video that I am currently uploading to YouTube.  Terrible videography but its my run-through using the rules below and the game ended in a 61-61 tie!  I think the jury is still out... need to try it with another person and see what happens.

The second house rule involves a select few of the pacement spaces. 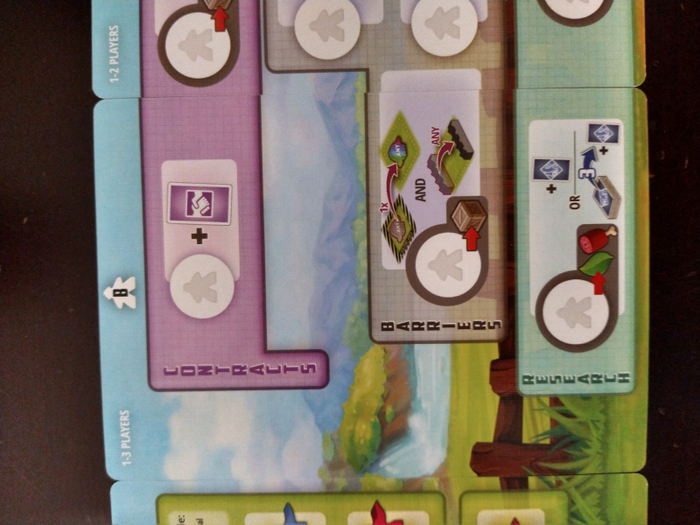 On the 'B' action board I think the first barrier space would benefit from anyone being able to place a worker there without penalty or restriction.  The number of workers you have and the need for other resources from other spaces are restriction enough. 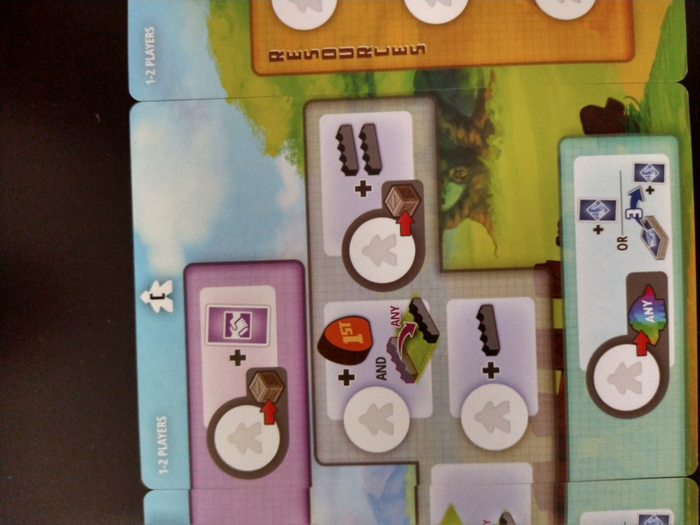 The top space on action board C is the other one I'd consider opening up with no restrictions.  This space requires a resource to use (creating a limit) and the other inate limites in the game I think would keep this one from being over used.

I might even explore how it works using these spaces like in #Architects of the West Kingdom where the more workers on the space the more you get of that action.  With only 4-5 workers in #Tiny Epic Dinosaurs it doesn't seem likely that it would be overused and in the first case your dinos are more likely to escape if you use it too much and in the second case you would have to have the correct dinosaurs to fulfill a second or third contract.

Wow, that's awesome! I haven't house-ruled any of my games, but there have been some that I've considered house-ruling. I guess since #Dune's rulebook leaves much to be desired, we've had to simply make judgment calls on rules, but I wouldn't exactly call that a house rule.

I feel like if you do it and you play-test it a bit, you should make a post about it so people looking at the game here on BGA can see your experiment!

Those dino meeples are so adorable.