Jaws of the Lion and Giveaway & Other Board Game News

The Hottest Game of 2020 So Far - Gloomhaven: Jaws of the Lion

Every board game related media is in a frenzy to cover the latest release from Isaac Childres, the designer of the #1 Game of All Time, Gloomhaven. Notable reviewers such as Tom Vasel of The Dice Tower, Efka of No Pun Included, and many others are absolutely loving this game, and Trent and I have also been busy trying to deliver as much content on Jaws of the Lion. I really hope you don't mind, because we've been spamming our own forum in the past week with so much Jaws of the Lion goodness, including videos for unboxing, first impressions, playthroughs, and there's only more coming. We're also giving away a copy to the lucky winner!

Top 10 Board Games of All Time

Top "X" lists are always fun and always wrong. At least, that's how I feel about them. Now that we have our own ranking system in place for tracking the Best and the most Trending games around, I put together an article introducing the current Top 10 Board Games of All Time, except... it's already wrong because Gloomhaven and its franchise has been seeing so much traction lately that it pushed it past Scythe once again. This is based on a number of factors such as visits on the game page over the game's lifespan, user ratings, number of mentions and references to measure its longevity, and so on. Anyway, please take a look at our list and let us know what you like/don't like seeing!

Here are some cool projects we're helping to spread the word that have less than 30 hours left on their campaigns!

If you like the sound of a dice worker placement game with another fantastic illustration by Andrew Bosley (think Everdell), plus high quality components and cool merchant theme, make sure to check out the campaign before it ends.

Dinosaur 1944 brings the usual premium miniatures game fun from Petersen Games, and although it took time to build up traction, the campaign has now doubled its funding in the span of a week. If you want to see the potential of a game about army heroes vs. giant dinosaurs, take a look at their campaign!

Things Found on the Web

If a game has been out for years and is owned by only a handful of people in the entire world (at least, on BGG), does that mean it's a bad game? Maybe, maybe not. It certainly is interesting to learn about them though, and here's J from 3 Minute Board Games covering 12 of them.

Board Game Advice for Daniel Radcliffe

Have you ever met your "boad game soulmate"? Well, Actualol has found his match and here are his tips for Daniel Radcliffe.

As mentioned above, we're giving away a copy of the hottest game of 2020 (so far)! We're also giving away Cartographers with the anticipation that it will win the 2020 Kennerspiel des Jahres (Connoisseur-Enthusiast Game of the Year). At least, that's our wish since we like it more than The Crew.

Thanks for the read! Make sure to check out the new ranking system and let us know what you think.

All pretty cool stuff. Love it!

Thanks! Any plans for gaming this weekend?

I took off Friday and Monday this week to get some RnR. I'm thinking about trying to convince my family to play Root. Trying to talk my wife in to Clans of Caledonia too but if that doesn't work we'll play Wingspan, ping-pong, and maybe Squeeze in Tapestry or Heaven and Ale.

Does anyone feel this way yet? (I saw this shared on one of the facebook groups): 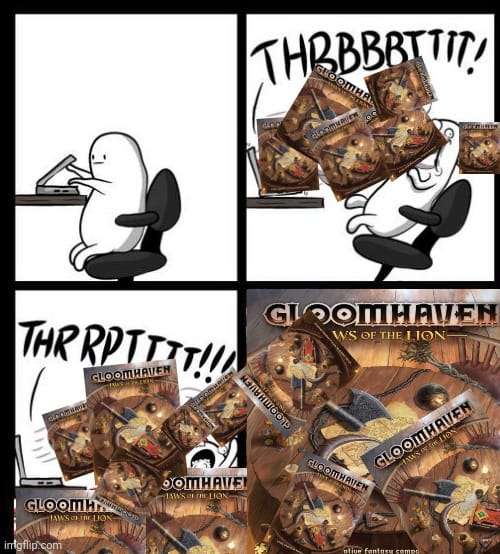 Yes. But in a good way. It's so nice to see someone take a meaty game and not dumb it down but really truly streamline it and send it out to the masses and it's good. This isn't GloomHaven: The Dice Game or Munchkin: Gloomhaven. It's straight up Gloomhaven but made so that most people can get into and aren't intimidated.

I was watching Tom Vasel's review last night and boy, he looked so serious throughout the entire video, like he's seen the greatest game of all time. Glad he likes it! haha

They did such a great job distilling GH down to a package like this. Hoping that I'll keep enjoying it. Seeing that I even enjoyed the very basic scenario #1, I don't think I'll have to worry.

As for Tapestry, let's see how the new "Sand" game holds up ;)

I gotta say, after Tapestry I'm VERY wary of big scale SM games. Especially since I've cooled on Scythe and Wingspan too.

If Jaws of the Lion is the mass market version of the "greatest game of all time" and it sells than I really believe that JotL supplants base Gloomhaven and the GOAT. That accessability is HUGE. Heck, take OG Gloomhaven and split it into smaller boxes and sell them separately. So far JotL shows that it's extremely viable.

Yeah, and that's just from you, haha.

Nice.  Have you shared your Solo impressions for that yet I forget?

I hope you like it.  I really have no interest in Tapestry.

I did but it was long-winded lol (I think I'll just give a short and sweet "final thoughts" on future ones, and leave out all the extra parts). Here's the post if you're interested. As for Tapestry, yeah, it's easy to see why it wouldn't be interesting for you :)

I may wait for the shorter version, we'll see if I have a few minutes to check it tomorrow.  Yeah just not enough player interaction.  And, the "civ" theme felt arbitrary.  Like #Wingspan it feels like Tapestry could be fun for me solo but I don't think I'd be into it with others.

Yep...at least until I get my copy in August :)

Ohhhh nice. It sure is hard to find a copy these days. Do you think your wife will like it?

Oh she played ALL the way through Gloomhaven w me.  Well almost.  Lockdown hit 3 days before we did the final scenario.

But this one I got for me.  She MIGHT play once in a while.  That's all.